It was a frustrating week on local issues. In East Brisbane, we reported on the recent installation of this hazard for people cycling on Stanley Street East – which is supposed to be a principal cycle route, and is a vital commuting connection to the CBD. Brisbane City Council have claimed that the build-out has been installed to make conditions safer for pedestrians, but we haven’t been able to find any evidence that is the case. If drivers won’t stop for a pedestrian on a wide crossing, what evidence is there they are more likely to stop by an installation like this?

On the other hand, there is plenty of evidence for what makes streets safer: lower traffic speeds, less motor vehicle traffic, protected bike lanes, and more people walking and cycling. A sensible treatment for Stanley St would be to transform it into an active travel corridor by extending the Woolloongabba Bikeway east to Norman Park. In fact this is one of the major themes emerging from the state government’s South Brisbane Transport and Mobility Study. We can only conclude that Brisbane City Council are not listening to their own residents who understand that widening roads just adds more cars, and that a few poorly thought-out kerb build-outs are not going to make Brisbane a safe and pleasant place to walk. Making conditions more hostile for cycling just exacerbates the problem.

On the other side of town, we started to get a bad feeling about the “upgrade” of the Grammar Path, where it intersects with the path to Gregory Terrace, which looks like it has been designed by someone who doesn’t understand how two-wheeled vehicles go around corners, and how people negotiate space when they have enough room to anticipate and accommodate each other. We’re hoping the finished product is a little better than it seems to be shaping up so far. 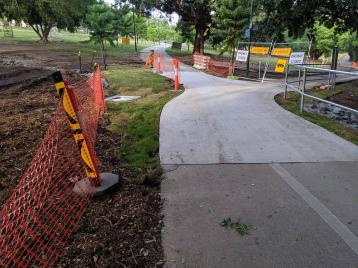 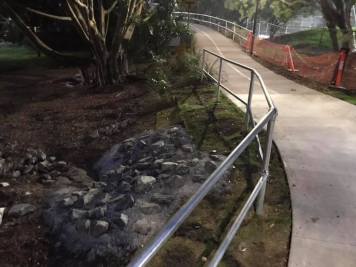 On a more positive note, we do acknowledge the work of Council staff who were on hand at the consultation sessions for the “Wellington Diversion” this week. (In case you’re new to it, this will connect the North Brisbane Bikeway at Wooloowin to the Kedron Brook Bikeway at Lutwyche via a combination of shared paths, separated bikeway, and traffic-calmed streets along Chalk St, Kedron Park Rd, Wellington St, and Bradshaw St). It was great to be able to talk through the details and reasoning with the design team, and also good to hear that the feedback from nearby residents has been very positive. 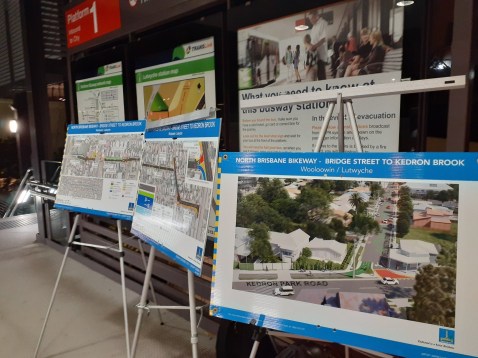 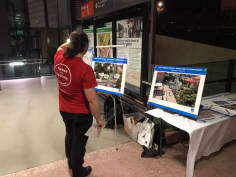 Thanks also to our contact at Queensland Rail for sending through this picture of the new bike repair stand that has just been installed at Eagle Junction Station. This is great; we’d like to see them in secure bike parking facilities at every station, making it easier and more convenient for people to ride their bike to catch public transport instead of taking the car.

Around the suburbs, it is good to see more banana bar hazards being replaced by bollards. In Cannon Hill, Morningside, and Bulimba, Council seems to be using waist-height bollards rather than the taller, more visible ones used elsewhere, but it’s still an improvement over the pinch-points created by banana bars. (Infuriatingly, some of those were only installed as recently at 2015, while we pleaded with Council not to). 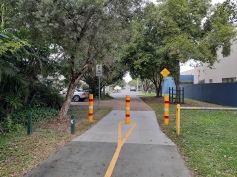 We all know that developers love to show pictures of relaxed people on bikes in their marketing images, but the artist’s impressions of the customers at the future “RiverMarkers” market area at 506 Lytton Road, Morningside are quite special, given its location as one of the most hostile places you might ever attempt to ride with a child on the back of a bicycle. 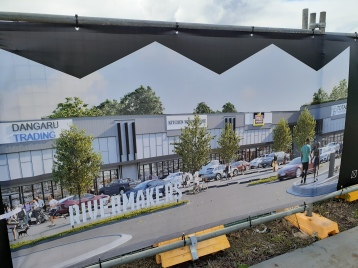 The Sydney Morning Herald this week made the point that the road death toll should include victims of vehicle emissions. We agree; it’s time the real costs of Australia’s motor vehicle dependence were accounted for. Cars don’t just cause congestion in cities; pollution from motor vehicles adds billions to health care costs. More electric vehicles would be great; but an even simpler and healthier solution already exists; state and local government need to get serious about discouraging car trips, and promoting clean, efficient, healthier modes – like cycling.

On that topic, Belinda and Andrew attended a forum on air pollution at QUT, which gathered community members, health experts and local campaign groups to encourage participation in a review of Australian air pollution standards, aiming for the strictest possible standards for harmful pollutants. Transport emissions are the most significant urban source of emissions, and there are essentially no safe limits. The good news is that even small changes in pollution levels will reap major health benefits via reductions in rates of cancer, asthma and other health problems. We need to push for governments at all levels to do more to provide better alternatives to our current car-centric city planning.

In Auckland, Dr Kirsty Wild mused: are cars the new tobacco? Which got us thinking…Do you ever have those moments where you see someone light up a cigarette and think “how can they do that to their body”?  What if we started thinking the same way about people turning the ignition on their car in the morning? Even before taking the effects of pollution into account, the health impacts of driving 40 minutes a day are not dissimilar to smoking tobacco or drinking to excess. “You are more likely to struggle with your weight, have higher blood pressure, and you are at an increased risk of heart disease, diabetes, and certain types of cancer.” Are our government authorities making us sick with the design of our cities and focus on car transport?

From health, to healthy business; we spotted this good discussion of one of Melbourne’s trouble-spots, Sydney Road, which applies equally well to any number of major Brisbane roads through suburban shopping strips. As the author points out, contrary to many fears, the real problem for local traders is traffic, not parking.

In NSW, the Labor Opposition recently appointed a Shadow Minister for Active Transport, and she is leading with calls for the government to focus on building more dedicated cycleways to complement the city’s roads and public transport. In Queensland, active transport is a tiny part of the Transport and Main Roads portfolio, where it gets very little attention – and even less funding. Perhaps a move to make it a separate portfolio might be a way to put more emphasis on the importance of active transport for health, communities, healthy aging, access and inclusion, tourism, infrastructure and planning.

From the UK, The Guardian published a good myth-buster for all the common objections to bike lanes which get brought up over and over again. They also ran some great cartoons with a few home-truths anyone who rides a bike will recognise. Sadly the description of the “shared space” next to the wide, smooth road and car storage is all too familiar.

Back in Australia, it’s great to see increasing coverage of the practical benefits of electric vehicles that are already proven, reliable, available, affordable, and space-efficient. Bikes have always been the best way to ‘bust congestion’ in cites. But electric bikes break down even more barriers, counteracting the challenges posed by longer commutes, hilly terrain, hot weather, physical limitations (especially for older people and those with disabilities), and the need to transport kids, luggage, or groceries.

Finally, Hamish sent us a Postcard from Seattle, where he has been checking out some of their great protected bikeways. He also reports that there are very few beg buttons downtown; most traffic lights change on a fair timer, and pedestrians walk at every change. Perhaps as a result, people seem to walk a lot, and there’s lots of casual biking. No one seems to queue through intersections or intimidates pedestrians – although drivers do swear and yell at each other! Lime and Uber bikes are very popular (but also very expensive), and people seem to park them well. They have electric assist share bikes! 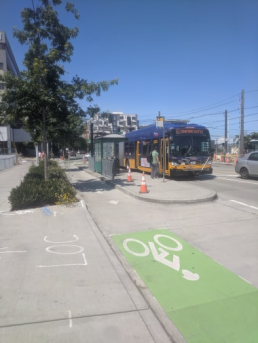 Victoria Park is now open to the public, and work has finally begun on the Logan Rd underpass at Stones Corner! We check out path upgrades in Tarragindi, Ashgrove, and Tingalpa; bridges and creek crossings in Chermside West, Geebung, and Bridgeman Downs; and bollards and build-outs in Morningside and Norman Park.

Electric cars are still cars; e-bikes are the zero emissions vehicles of the future! Also this week, we check progress on the Chermside to Aspley path, the North Brisbane Bikeway, the Sandgate Road tunnel at Nundah, the V1 Veloway, Old Cleveland Road, the Wakerley Bikeway, separated paths at Clontarf, and unfortunate destruction of bushland at Cannon Hill.

This week marks a sad anniversary, but still no action. We consider the implications of a surprise addition to the Kangaroo Point Bridge. Locked down in Morningside, Belinda reviews Lytton Rd, Wynnum Rd, Junction Rd, and a roundabout people keep driving over. We also visit Coorparoo, Carina, Wooloowin, and Rocklea, and celebrate being able to take bikes on trains, even during peak times.

This week: find out why we like a rubbish solution in Wooloowin, what we were doing playing with scissors in Rocklea, and why we’re asking that a path in Cannon Hill not comply with best practice design. We reveal what we know about the Brisbane City Council budget—including the Viola Place connection at Brisbane Airport. Our suburb of the week is Wakerley.