This week, Council released their plan for the connection between the North Brisbane Bikeway at Wooloowin and the Kedron Brook Bikeway at Lutwyche. This long-awaited plan proposes some minor improvements for people who already ride the route along Wellington St, but it doesn’t really address the major issues, nor take into account a couple of major developments which will impact the proposed bikeway. See our more detailed review in this blog post. 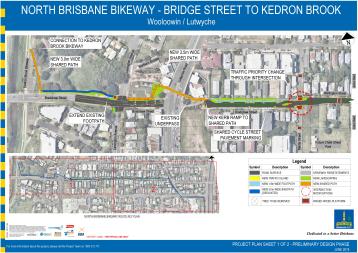 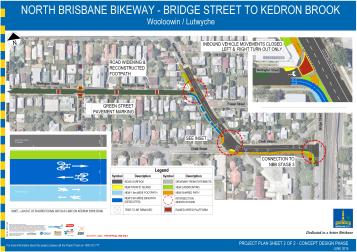 We are still wondering when the missing section of the Woolloongabba Bikeway on Stanley St, near Reid St, will be finished, as it has now been sitting like this for months. Council are not able to provide a timeframe. We can’t help thinking that a road project would not be left like this. 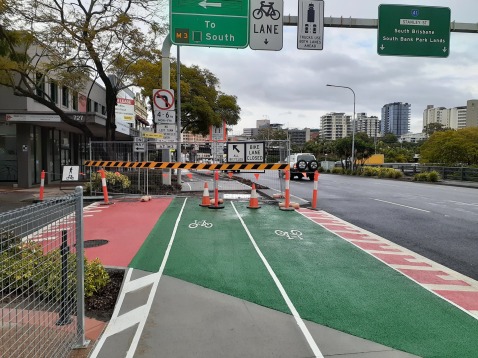 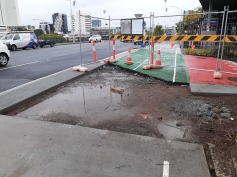 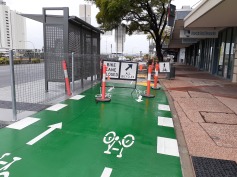 Overhead signs on the Goodwill Bridge this week warn of upcoming surface work  from 1 – 6 July. After the incredible debacle last time this was done (turning the bridge into a slip and slide), we’re thinking, what could possibly go wrong??

Locally, we reported that representatives from the various Brisbane BUGs now have regular meetings with Queensland Rail and we’re pleased to report on progress towards casual bike parking at all train stations, and more trials of secure bike parking cages. Racks have been installed this financial year at Cannon Hill, Enoggera, Gaythorne, Hendra, Moorooka, Newmarket, North Boondall, Northgate, Rocklea, Virginia, Wilston and Windsor (as well as some stations outside Brisbane). There will be more by mid-July at Albion, Ascot, Auchenflower, Bowen Hills, Coopers Plains, Nundah, Shorncliffe, Wooloowin, Wynnum and Yeronga. 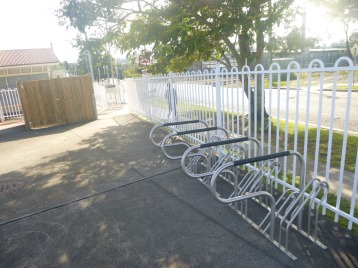 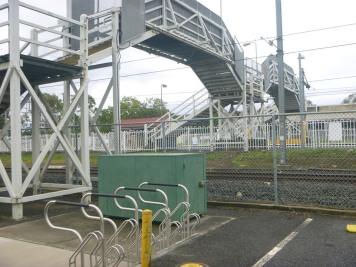 We’ve pointed out that at many stations, bike racks are needed at multiple entrances. We also hope that the trials of secure parking cages (which will be accessed via a phone app for registered users) will lead to a rapid roll-out across the network. We’ve also had some good discussions about taking bikes on trains, noting that the definition of “peak-times” is confusing and can leave people stranded if they need to travel through the CBD. 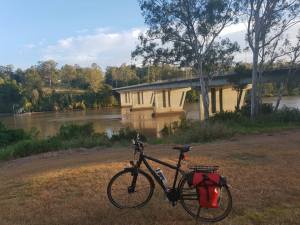 West BUG received a heads up that the Department of Transport and Main Roads will be conducting investigative works around the Jindalee Bridge over the next few weeks as part of the business case for the Centenary Bridge Embiggening. From late June to late August there will be works around the Centenary Bikeway at times, but safe access will be maintained at all times. Chris laments “this is part of the Queensland Government commitment to entrench car dependency in the western suburbs by widening roads.” As such there is no intention to include provision of a busway or transit lanes in this project.

On a happier note, West BUG were able to report that Department of Transport and Main Roads and Brisbane City Council are continuing to shine a light on cycling in the western suburbs, with work progressing on lighting on the Western Freeway Cycleway at Indooroopilly near Witton Rd, the Ashridge Road bikeway at Darra and the Windermere Bikeway at Sinnamon Park. Lighting makes cycling feel much safer after dark, particularly on secluded paths like these away from local streets. 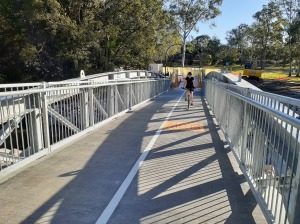 EaST BUG reported that the new bridge across Bulimba Creek at Eromanga Street Park, Carindale is now in operation! (although there is still a little work to go on the connecting paths). Now, if only you didn’t have to ride up Eromanga St, which is prohibitively steep for many people who would like to use the bikeway. Will Council seize the opportunity to insist that any development of the Pacific Gold Club allow for the bikeway to continue along Bulimba Creek? Patronage of golf courses is declining, but hundreds of families are out on the Bulimba Creek Bikeway each weekend. 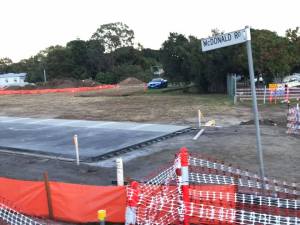 Meanwhile, riders from the northern suburbs have been excited to see that the first concrete has been poured on section 2 of the North Brisbane Bikeway along McDonald Rd.

The petition from CBD BUG calling for protected bikelanes on Melbourne St as part of the Brisbane Metro works closed this week with 360 signatures. That follows some political mud-flinging between Lord Mayor, Adrian Schrinner and the Queensland Government in relation to the Metro project; the Lord Mayor blaming the State Government for delaying the project, and Labor Councillors returning fire saying that the Council administration has prematurely gone to tender. 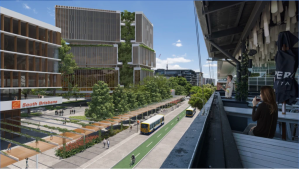 We just hope the issue can be resolved to create good outcomes for active transport at the intersection of Melbourne and Grey Streets, and a smooth connection into the CBD over the Victoria Bridge.

International cycling conference Velocities is on this week in Dublin, Ireland, with discussion observing “Most civilised cities are at a tipping point in realising the benefits cycling can bring to cities. We have been sitting on the solution for decades.” You need to decide what kind of traffic you want and design for those road users.  But there’s a caution: “If you’re finding space for cyclists by cutting into footpaths and cutting down trees, I would say you are going wrong.”

An article in The Conversation this week discussed the value of kerb-side space. While businesses are almost always fearful of losing customers if the kerbside nearby is re-purposed from car parking to other uses, surveys consistently show that public transport and active travel modes (walking, cycling, and scooting) deliver more customers to adjacent businesses than private motor vehicles. Before-and-after studies confirm that replacing parking with public transport or bike lanes increases sales for area businesses. Smart business owners would be lobbying *for* bike lanes and improved footpaths past their door. Bike lanes are good for business!

Victoria Park is now open to the public, and work has finally begun on the Logan Rd underpass at Stones Corner! We check out path upgrades in Tarragindi, Ashgrove, and Tingalpa; bridges and creek crossings in Chermside West, Geebung, and Bridgeman Downs; and bollards and build-outs in Morningside and Norman Park.

Electric cars are still cars; e-bikes are the zero emissions vehicles of the future! Also this week, we check progress on the Chermside to Aspley path, the North Brisbane Bikeway, the Sandgate Road tunnel at Nundah, the V1 Veloway, Old Cleveland Road, the Wakerley Bikeway, separated paths at Clontarf, and unfortunate destruction of bushland at Cannon Hill.

This week marks a sad anniversary, but still no action. We consider the implications of a surprise addition to the Kangaroo Point Bridge. Locked down in Morningside, Belinda reviews Lytton Rd, Wynnum Rd, Junction Rd, and a roundabout people keep driving over. We also visit Coorparoo, Carina, Wooloowin, and Rocklea, and celebrate being able to take bikes on trains, even during peak times.

This week: find out why we like a rubbish solution in Wooloowin, what we were doing playing with scissors in Rocklea, and why we’re asking that a path in Cannon Hill not comply with best practice design. We reveal what we know about the Brisbane City Council budget—including the Viola Place connection at Brisbane Airport. Our suburb of the week is Wakerley.