It was the week CityCycles started turning blue as we welcomed NRMA Insurance as style-sponsors for Brisbane’s fleet of share bikes. 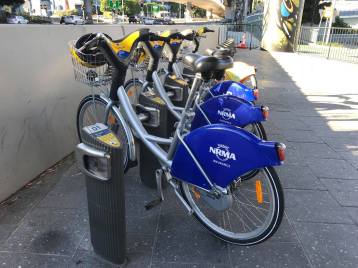 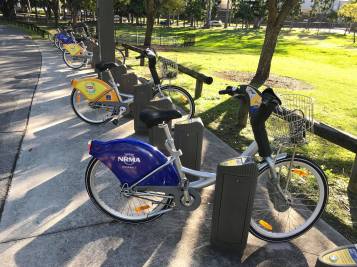 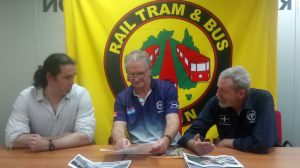 On Monday, Donald from Brisbane CBD BUG met with representatives from the Rail Tram and Bus Union to talk about plans for Melbourne St, South Brisbane, and the importance of ensuring people riding bikes don’t have to mix with buses in this busy area when the street is reconfigured as part of the Brisbane Metro project. They liked the concept Donald presented, and agree that buses and bikes are best separated; it’s safer, easier, and less stressful for everyone that way! Donald also provided a brief rundown of our proposed minimum grid of protected bike lanes in the CBD. Again, the RBTU like the concept of providing separated space for people on bikes away from motor vehicle traffic. 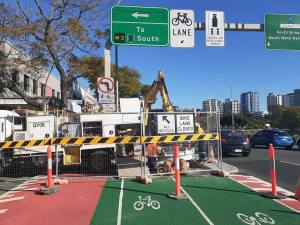 There was lots of action at last on the Gabba Bikeway at Reid St this week. Hopefully the missing piece will be in place soon, and the counters on Stanley St will be unwrapped and busy tallying the people taking the healthy transport option and busting congestion.

Airport BUG shared some images of construction progress on the North Brisbane Bikeway, which is starting to look pretty awesome… Our petition to keep the bikeway going along Dickson Street hit 100 signatures, but we still need a lot more to get the bikeway All the Way to EJ! 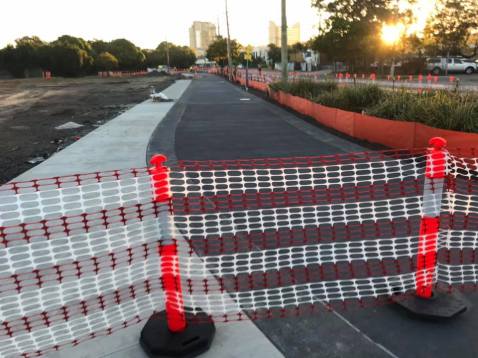 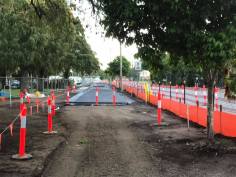 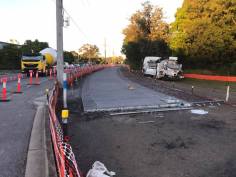 On Wednesday we happy to discover that the Edward St gate to the City Botanic Gardens had reopened, with the realigned pathway between there and the Albert St gate back in action. No more squeezing along the Alice St footpath! (Note: Bunya Walk is still closed at the Edward St end for the Riverwalk construction.) 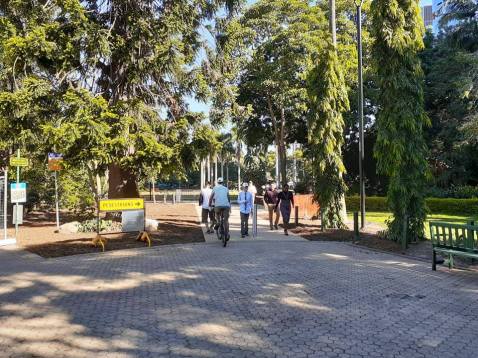 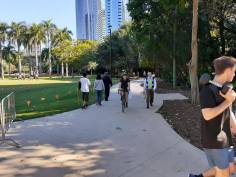 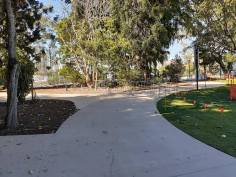 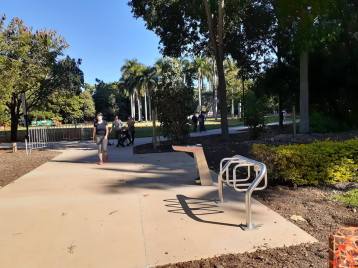 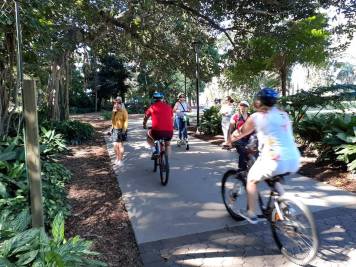 Also this week, Brisbane West BUG were happy to discover that the lights of Windermere Bikeway (Sinnamon Park) are on!

But perhaps the best news of the week came on Friday evening when the path at the northern side of the Land Bridge (in Victoria Park) was back in action following much needed improvements at the top (where the low stone wall on the inside of the corner has been removed and the sight-line improved), and at the bottom where the paths join (the opening has been widened removing the previously awkwardly tight turn). There’s also a new centre line. Those small improvements remove a couple of big headaches. 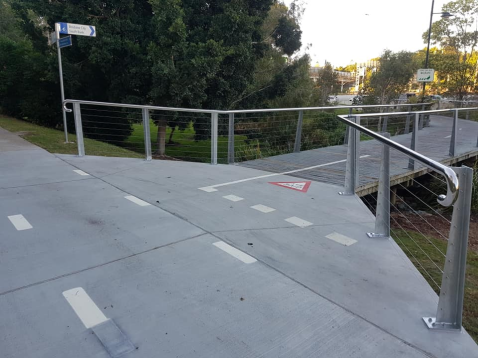 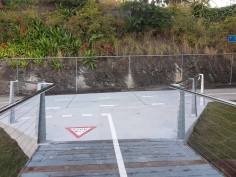 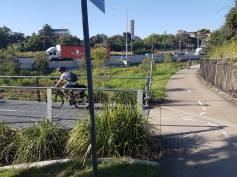 News from around Australia and the world

“London’s painstaking network of new bike lanes, its refurbished signals at intersections, and its world-renowned traffic congestion policies are paying off with record ridership.” The most dramatic rise has been in Central London, thanks to direct, connected, high-quality cycle routes. The city also has a full-time Walking and Cycling Commissioner to oversee development, and a congestion charge to make driving into the city centre less attractive. These are all measures Brisbane should be taking TODAY to position ourselves as a world-class city to live, work, visit, and do business.

Also from the UK, Chris Boardman (Walking and Cycling Commissioner for Greater Manchester, and former Olympic champion) has made this great response to a TV program which provides misinformation and promotes intolerance of people who chose healthy, pollution-free transport. As Chris points out, cyclists aren’t the ‘scourge of the streets’. They are mothers, fathers, grandparents and children all doing their bit to make Britain a healthier, greener and more liveable place!

Meanwhile, a report from the US says forget diet and exercise – for better health, we need better cities. “We have hard evidence that when you optimize a city for walkability, bikeability, public transportation, and cleaned-up parks, you can raise the physical activity level of a whole population by up to 30%. There is no gym, CrossFit, or exercise program that can get those types of results at a population level.” This comes as a new report from the Australian Bureau of Statistics reveals that Australian’s lifespan are reducing for the first time – and it’s due to rising obesity and high rates of road accident death.

The key is making the healthy choice the easy choice. It’s time for Brisbane to stop spending so much money and effort making it easier for people to drive, and in the process making it harder for people to live well!

But of while we can write all sorts of posts with details about the health benefits of cycling, sometimes a picture is enough. Hollywood star Olivia de Havilland is still going with the wind in her hair at 103!

Also in the news this week: when the Spanish city of Madrid implemented a “low-emission zone”, shops and restaurants saw increased takings as people found it more pleasurable to visit the central city without all the traffic. At the same time, emissions of poisonous nitrogen oxide and carbon dioxide dropped dramatically. When a new Mayor shelved the clean-air initiative, air pollution levels spiked again, and protesters took to the streets. Now a judge has ordered the restrictions be reinstated, ruling that the “health of [people in] Madrid” is more important than the “right to travel by car”.

It’s important to remember that pollution from cars is not just about exhaust emissions. As this article from the BBC points out, while new technologies–including electric vehicles–are helping to reduce emissions from car exhausts, dust from car brakes and tyres will still pollute city air, and fragments of microplastics from tyres, road surfaces and brakes flow into our waterways, and eventually the oceans. The answer? Reduce the use of cars by getting people on to less-polluting forms of transport… 🚲🚲🚲