On Monday, we reported that concrete had recently been poured for the upgraded section of the Bicentennial Bikeway near 1 William St as part of the Queen’s Wharf Brisbane Casino development. On Friday, Belinda was in the right place at the right time for a quick preview tour of the new mangrove walk. Check out the photos and latest news on our blog post.

Connections through the City Botanic Gardens are a mess this week, with Bunya Walk closed for the Riverwalk construction, and the detour closed for the “Edward St entry upgrade” (which is due for completion in “late June” according to Council’s website). Surely these two Council projects could have been better coordinated? At the very least, Council could have made allowance for the hundreds of people pushed out onto the cluttered Alice St footpath – like temporarily closing the row of on-street carparks to provide a path for people on bikes and scooters away from pedestrians trying to navigate the crowded footpath. Perhaps even temporarily removing the advertising screen creating a blind pinch-point by the bus stop… 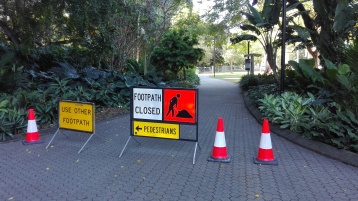 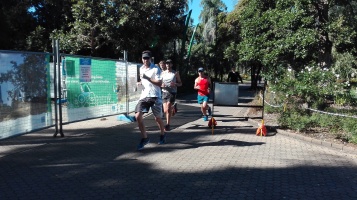 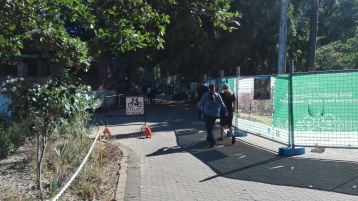 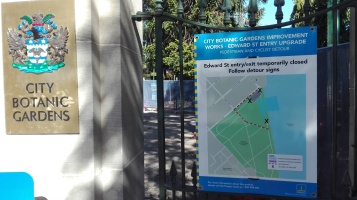 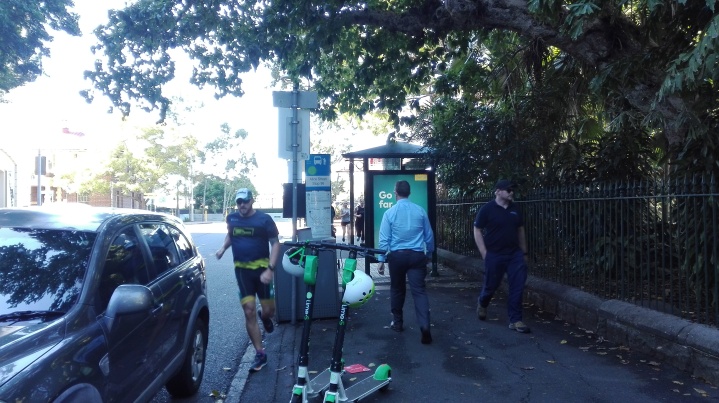 Speaking of mess, on the weekend, Belinda went along to an information session on the Wynnum Road stage 1b “upgrade” – which does nothing to improve the “principal cycle route”/”commuter cycling corridor” to Brisbane’s eastern suburbs. Even basic improvements like smoothing the narrow shared path have been ruled out of scope. We acknowledge that Council’s project delivery team have a difficult task when they’re sent out to “inform” local rate payers about road expansion projects which will encourage more traffic through their suburbs and make poor conditions even worse for people who want to walk or ride instead of driving. Even after 5 years of representations from East BUG Inc., we’ve been able to achieve very little in the way of provision for active transport along this corridor. But it was galling to be told that the construction work is compliant, maintaining the required 2.0m clear path when that very clearly isn’t the case for the current work near Norman Avenue. 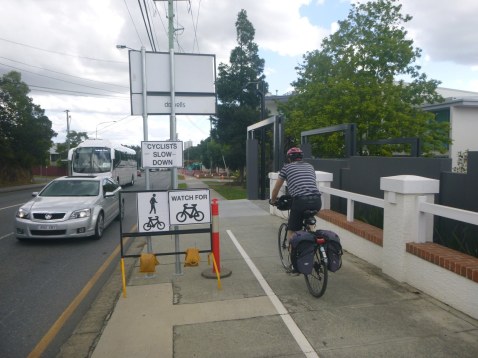 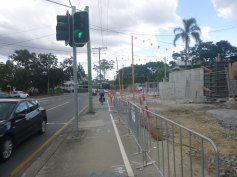 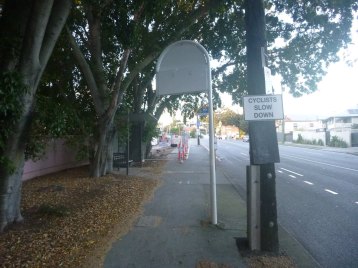 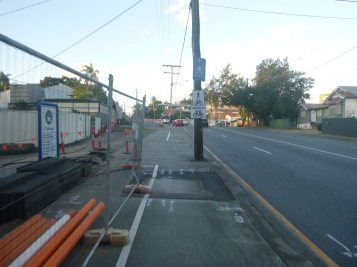 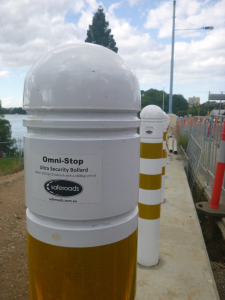 We also asked, who are the bollards near the Canning Bridge designed to stop? The speed limit along this section of Wynnum Road is 60kph, and it’s the main truck route to the Port of Brisbane. Yet these bollards are only rated to 50kph and 1.6tonnes – which is less than the weight of Australia’s top selling car. Protecting cyclists and pedestrians from falling onto the road has been ruled out of scope; but are these bollards supposed to stop wayward drivers who can’t merge from crashing into the Brisbane River after they’ve crossed the shared path?? 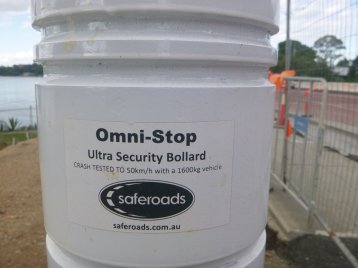 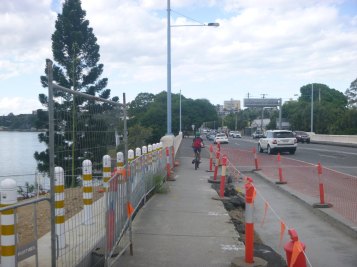 Meanwhile, on the alternative route toward the CBD from the east: inbound on Stanley St in East Brisbane, at the zebra crossing just before Whithington St, it appears that Council is about to install a kerb build-out that will push cyclists out into the main stream of traffic. Anyone who rides this way regularly will recognise that this spot currently offers a brief reprieve after negotiating the door-zone where you can let impatient drivers and Council buses past before you get to the next pinch point. If they go ahead with this change, riders will need to take the lane in front of 60kph traffic all the way up the hill. 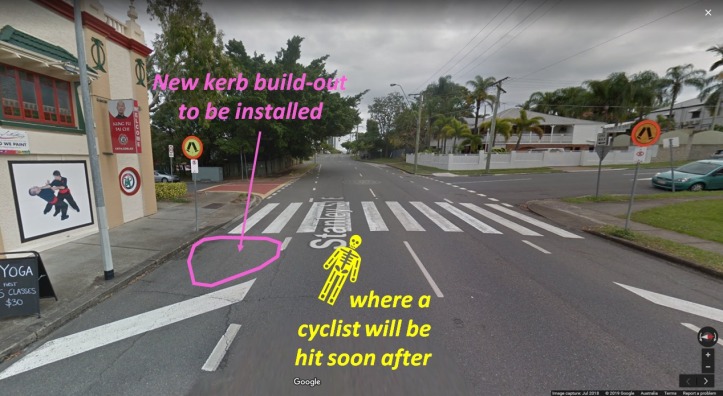 EaST BUG have been in touch with Brisbane City Council and The Gabba Ward office about the issue. We’ve suggested alternative treatments that would make Stanley St East safer for pedestrians without making it more dangerous to travel by bike:

This discussion about safer mid-block pedestrians crossings is from the US, where the laws are a little different, but none of the solutions for improving pedestrian safety involve building obstacles to make conditions more dangerous for people travelling by bike.

We’re delighted that the state and local governments are competing to provide better cycling infrastructure on the north side of Brisbane, with construction already under way on the North Brisbane Bikeway in Windsor and Albion. But there’s a key missing link at the northern end of Dickson Street that is “out of scope” so far. That’s why Brisbane North BUG are calling for Brisbane City Council to complete the North Brisbane Bikeway through to Eagle Junction and on down Jackson Street. This missing link, including a separated bikeway along Dickson Street, will save 2.6 kilometres for people looking for a safe way to cycle to the CBD from Toombul and beyond, and cut more than 4 kilometres off the ride from the CBD to Eagle Junction. We’re asking our supporters to please sign our petition and contact your politicians directly to tell them how important this link is to you. All the way to EJ! 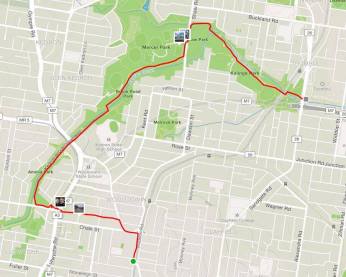 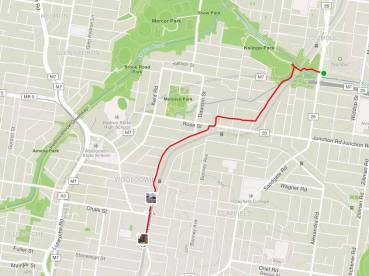 Also, Brisbane City Council’s “Metro” project will change Melbourne St, South Brisbane, forever. But the current plan doesn’t include protected bike lanes. Instead it would see cyclists travel in unprotected lanes, potentially sandwiched between moving and loading buses. It’s simply not an environment many people would feel safe enough to ride! The Dutch have solved the problem by putting the bikelane behind the bus stop. That design is now accepted as world’s best practice and spreading from international city to international city. We even have our first “floating” bus stops in Brisbane now! We’re calling for protected bikelanes to be installed on Melbourne Street as part of the Metro project, but we need your help to persuade Council. Please sign this petition from Brisbane CBD BUG for a more bicycle-friendly Melbourne St.

Cycling safety is also about the air that we breathe. How good are our air quality standards in Australia? Sadly our current standards are now behind those of many other countries. It’s our health and the health of our children that is at risk. Join others from Space4cyclingbne at a community forum hosted by Environmental Justice Australia to have your say on air pollution standards. The forum is being held at QUT on Wednesday 3rd July 6:30pm to 8:30pm. RSVP is required.

Check out this gallery of some bicycle infrastructure from around the world that is beautiful as well as practical.

Walking and Cycling Commissioners in the UK have called for an end to car-centric transport planning and a move towards investment decisions that “account for the true cost of car use to society”. They argue that current economic appraisal models used by the Treasury to decide whether to fund a new motorway or a segregated cycle lane “do not take full account of the negative consequences of making private car use easier, nor do they take full account of the benefits of walking and cycling on our health, wellbeing and environment”. Brisbane needs a role of Walking and Cycling Commissioner!

As this great video from Streetfilms shows, cities can change! Loud, congested, hostile roads aren’t inevitable. Utrecht in the Netherlands has some great examples of how a city can be transformed once city leaders are prepared to envision something better than wide roads and more cars.

Following the success of Madrid’s low-emissions zone and pedestrianisation of the centre of Pontevedra, Spain is leading the way towards cities that are cleaner, healthier, quieter, greener, and more livable. Their next step is to clear out non zero-emissions vehicles from the centre of any town over 50,000 residents – and there is huge public support for the move. It all starts with a little leadership!

Often, a key issue standing in the way of safe bike infrastructure and more pleasant, greener streets is car parking. Any reduction in that is seen as a “loss”. But livable cities put people above cars. While Brisbane City Council is embracing *more* car parking in the inner suburbs, we should really be moving to less. As this article in The Conversation explains, of all the problems our cities need to fix, lack of car parking isn’t one of them.