There has been much criticism of Brisbane’s public transport network recently, with data showing that only 61% of households are within 400m of a public transport stop, and less than 12% within that distance of a service which runs more frequently than every half hour. That sounds bad, and there have been calls to improve public transport; a need we don’t dispute. However, it is worth considering the cost of trying to service middle and outer suburbs with high frequency public transport.

Consider Council’s flagship Brisbane Metro project, which will see frequent services to Eight Mile Plains: Almost no-one lives within 400m of the station at Eight Mile Plains, so it’s actually not going to improve this metric at all. Part of the reason few people live within 400m is that almost all the available land is taken up with car parking – and there are calls at both state and local level to add more.

But a 400m walk should take around 12.5 minutes (plus the interminable time Brisbane people spend waiting to cross roads). In that time, a novice cyclist can comfortably cover 3km – which would massively increase the catchment of each station.

Adding additional public transport routes and services is expensive. Adding convenient carparking at multiple locations for every resident is even more so. Providing good bicycle paths and bike parking at transit nodes is a much cheaper way to put the majority of Brisbane residents within easy reach of a regular public transport service. And of course those paths are valuable at all times, and enhance the health of our communities, unlike seas of car parking. 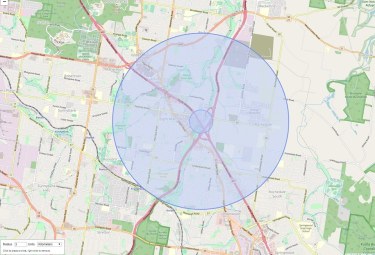 On weekends, holidays, and after hours, the car park is a baking empty expanse.

We think the issue is not so much Brisbane’s poor public transport, but poor land use planning, and poor prioritisation; Brisbane City Council and the Queensland Government insist on building for people who drive, and then wonder why everyone does.

In the case of Eight Mile Plains, locals would benefit from: 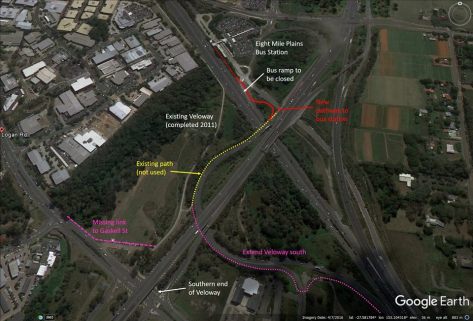 Eight Mile Plains Bus Station could be easily linked to the Veloway, and residential areas to the west of Logan Road

There is not even a sealed footpath along Miles Platting Rd, connection the Eight Mile Plains Station to Rochedale

But of course these issues aren’t unique to Eight Mile Plains Station. A similar analysis of train stations and major bus stations across Brisbane would yield similar results: land use around the station means very few people live within walking distance; valuable land around the station is taken up by car parking (which is largely empty on weekends and evenings); connections which could enable people to arrive by bike are poor; and most stations lack suitable bike parking facilities.

This week we rode to remember Carolyn Lister; a life well lived and a friend well loved. The first meeting of the Active Transport Advisory Committee was positive, but no miracles happened. No cycleways have popped up in Brisbane yet. Around the suburbs we visited Salisbury, Rocklea, Oxley, and Coorparoo.