At a public forum on Designing Healthy and Liveable Cities, Gabba Ward Councillor Jonathan Sri asked a panel of experts what would be the “low-hanging fruit”; where would you start first to develop a more equitable, healthy, liveable Brisbane. As part of his response, Queensland Government Architect Malcolm Middleton pointed to a document written in 1926 which proposed 12 bridges across the Brisbane River, with detailed analysis of each option. Belinda tracked this document down in the Brisbane City Library, and discovered a tattered volume full of delightful detail, and crumbling fold-out maps and plans. We present: 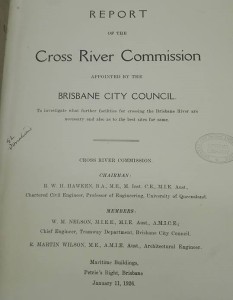 Report of the Cross River Commission
appointed by the Brisbane City Council.

To investigate what further facilities for crossing the Brisbane River are necessary and also as to the best sites for same.
January 11, 1926

(Sometimes referred to as the Hawken Plan).

In 1925, the (then) Victoria Bridge was the only bridge across the Brisbane River, and it was under strain. Also, although the Victoria Bridge was on the main line of traffic from the City to South Brisbane for the time at which it was built (1898), the centres of population and development had since moved. In response, the Brisbane City Council established the Cross River Commission:

The commission delivered their report on 11 January 1926, containing three parts:

We look here at the recommendations, and call on the Brisbane City Council and the Queensland Government to finally build the river crossings which have been neglected in the 92 years since they were identified as both necessary, and the most desirable crossing locations.

The report proposed 12 bridges or tubes, and the “anticipated order of time of requirements will be indicated by the numbering of the proposals”. Those considered necessary immediately were:

I. Kangaroo Point
A double-deck bridge from Adelaide St to Main St, Kangaroo Point. To accommodate shipping traffic, the report also recommended a shipping canal be dug 150 feet wide and 35 ft deep through Kangaroo Point. They noted that this would mean “The streets of the City proper are relieved of all traffic from the outside that wants merely to cross the river.”
Although not on the exact alignment originally proposed, the function of this bridge and canal were essentially achieved when the Story Bridge was built in 1935. Its higher level left clearance for shipping traffic so that the canal was not required.

IV. New Farm to East Brisbane
Connect Sydney St New Farm to Wellington Rd, East Brisbane via a “transporter bridge”, and later a low level bridge with an opening span next to the shore.
This connection is still outstanding, although the CityCat terminals at nearby Mowbray Park and Sydney St might be argued to service the connection at intervals, and provided you don’t want to travel at night.

V. Sherwood Area
The plan called for a bridge over Oxley Creek near the Brisbane River. Or as an alternative, suggested acquiring the railway bridge at Indooroopilly and adapting that for a road bridge, then building a stronger railway bridge alongside.
Both these options were eventually completed, with the Walter Taylor Bridge at Indooroopilly (next to the rail bridge) opened in 1936, and the Pamphlet Bridge across Oxley Creek in 1964.

VI. Bulimba Reach
According to the 1926 report, the rapid development of the Balmoral area necessitated a bridge from Barton Rd, Balmoral to Chermside St, Bulimba. (Note that both sides of the river were referred to at that time as Bulimba, so this is now Chermside St, Teneriffe.) The report recommended a Transporter Bridge and later a tube, with an estimated cost of £2,000,000. Alternatively, “since the river has a long straight reach allowing of navigation, an opening bridge having 60ft clearance above high water might be considered.”
A bridge across the Bulimba Reach remains outstanding 92 years after this recommendation was made.

VII. Moggill
“The existing ferry at Moggill is primitive, and a new ferry is recommended, which later can be replaced by a low level bridge.”
Many would argue that the situation has changed very little since in the intervening decades!

VIII. Toowong to West End
Developments at St Lucia and Toowong were apparent, and the Commission recommended a low level bridge at a site across the narrow part of the river joining Glenny St and Montague Rd. They noted that on an actuarial basis, a bridge would be cheaper than a ferry, while its capacity and general convenience would be much greater.
A bridge here remains outstanding!

“The programme stated above is put forward for initiation within the next 18 years. Additional cross-river requirements, though not of the immediate future, will be met by:-

IX. Apollo Rd
A vehicular ferry from Racecourse Rd to Apollo Rd, and later a Tube from Beatrice Tce to Oxford St and Lytton Road.
A cross-river ferry operated between Apollo Rd and Bretts Wharf for 75 years, before being closed in 1998. These days there is a limited service via CityCat. The development of the previous Bulimba Barracks site would be the ideal time to reconsider a crossing at this point of the river, but it’s unclear how this could fit with the Kingsford Smith Drive infrastructure.

X. Edward St to Kangaroo Point
The report recommended a transporter bridge from Edward St to Kangaroo Point for local traffic, as well as a Tramway Tube from George St to the Main St – Vulture St corner.
In 2018, plans for a railway tunnel under the river at approximately this location are well advanced, with the Queensland Government’s Cross River Rail project, while yet another investigation into a pedestrian and cycling bridge has been commissioned.

XI. Dutton Park to St Lucia
A ferry, and later a low-level bridge from Carmody St to Dutton Park.
This has effectively been achieved for the pedestrians, cyclists, and public trasnport users via the Eleanor Schonnel Bridge, built 80 years later in 2006.

XII. New Farm to Hawthorn
Perhaps most surprisingly, the report called for a High Level Bridge from New Farm to Galloway’s Hill, connecting James St and Merthyr Road on the northern side to Agnew St and Cleveland Rd (now Wynnum Rd) on the southern side. This was envisaged to connect to a railway development to Balmoral which at that time had been foreshadowed by the Commissioner for Railways, and to the existing Cleveland lines – presumably near Morningside.
This is makes a total of four bridges recommended downstream of the Story Bridge servicing what are now inner suburbs, which were never constructed.