Final* plans for Stage 1B and 1C of the Kangaroo Point Bikeway have been released just in time before the end of 2018.

(*apart from the bit which isn’t yet final) 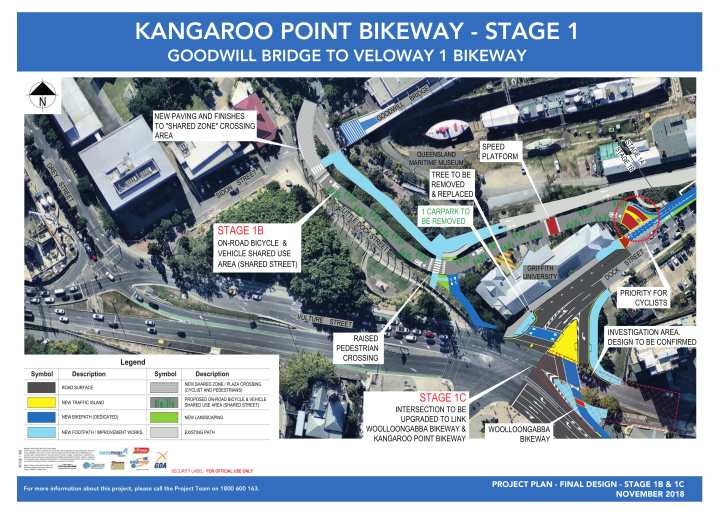 In general, we think it’s great, and commend the Council team on their efforts to address the key issues identified during the community consultation.

Our remaining issues (which should be taken as suggestions for further improvements, not as a negative reflection on the project as a whole) are:

This week: development at Albion Station has been approved with less than ideal cycling facilities. Progress on the North Brisbane Bikeway sees Fraser St become a cul-de-sac; there are temporary detours on the Veloway at Gaza Rd; and we discuss the Griffith Uni intercampus link between Nathan and Mt Gravatt. Our political candidate of the week is Labor’s Trent McTiernan who joined Belinda for a ride around the Macgregor Ward.

This week we highlight the problems on Annerley Rd which haven’t been solved through the painting of on-road bike lanes. We also expose some of the flaws of a supposed transit-oriented development in Buranda, and an active-transport waste-land between Eight Mile Plains and Rochedale.

Our first weekly digest for 2020, and we’re already hard at work on our New Year’s resolution: ride more, drive less, and help create the conditions that will enable others to join us. Learn from and adapt the best of what other cities have implemented, and make Brisbane better for everyone. A council election is coming up and our first meeting for 2020 was a bike ride with the candidate for Runcorn Ward.

This week we look back at our wishlist from Xmas 2018, how far we’ve come, and how much further we still have to go. We also explore bikeways around Brisbane – the good, the bad, and the disconnected. Speaking of disconnected, we’re still campaigning for 30kph neighbourhood streets – which some people still find controversial.

This week Labor’s candidate for Lord Mayor, announced his support for a grid of protected bikelanes in the CBD. His team are making it a key part of their election strategy to promote a cycle-friendly city! With Labor and the Greens on board, the 2020 election could become a contest about who has the best plan for a cycling city.