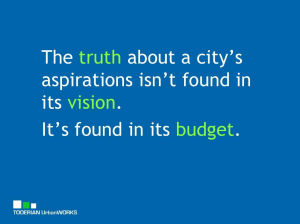 Budget week is time to see how serious are our Council and State Government really are when it comes to getting more people using healthy transport… and the answers were  rather underwhelming.

There were no particular surprises in the Queensland State Budget, which was released on Tuesday, but we were happy to see funding committed in 2019-20 to complete Stage E of the Veloway and stages 2 and 3 of the North Brisbane Bikeway. As we’ve previously noted, there are also a number of major road projects underway where we’ve been successful in getting good outcomes for cycling. TMR’s project list for future years also contains potentially good news about other projects we have been advocating for, including the Veloway at O’Keefe St, and a “Griffith Arterial Cycleway” which could start to address a major gap in the network in the southern suburbs.

In her budget speech, Jess Pugh MP, Member for Mount Ommaney gave a special mention to Chris Cox from West BUG for his role in advocating for the inclusion of a grade-separated cycle underpass for the Centenary Bikeway in the Sumners Road interchange project. That inclusion will save cyclists up to 5 minutes per trip on the current detour via Dandenong Road. But the cycleway didn’t happen by chance; the original plan included a 3-stage road crossing which would have barely improved the current situation, so Chris has been advocating for the improvement since 2015. Yes, Chris, and all cyclists who use the Centenary Bikeway, are very happy about this project!

Brisbane City Council released their budget on Wednesday. Unfortunately it was also lacking in surprises. They allocated $6.1 million to planning the promised new green bridges, but nothing for construction until after the March 2020 election. Funding under the Better Bikeways for Brisbane program has been allocated to finishing the existing “big ticket” bikeways (Woolloongabba Bikeway, Kangaroo Point Bikeway, and Botanic Gardens Riverwalk), and getting started on the Indooroopilly Bikeway. We’re still concerned that many of the projects which have had chunks of funding allocated have been dropped, and it’s unclear where the money has gone instead.

For future programs, we hope to see not only an increased investment, but also a much more strategic planning approach that will deliver bikeways based on the value they add to the city’s network.

The week started with a nice surprise, with Lord Mayor Adrian Schrinner announcing that his Council will reclaim space that is currently occupied by Victoria Park Golf Course, and convert it back to accessible parkland for everyone in Brisbane to enjoy. We’re excited by the possibilities this could open up for better cycling and walking connections in the inner north. Perhaps even more importantly, we think this decision is a good sign that Council is serious about making Brisbane a more liveable and inclusive city.

Josephine Cruickshank works for the Northern Territory Department of Infrastructure, Planning and Logistics in Darwin. In 2017 she was awarded a Churchill Fellowship to investigate successful cycling policies and programs in regional centres and smaller cities. Her report makes for some very interesting reading, and many (all) of her key recommendations resonate with us. Not least:

This video is a great illustrated summary of research which highlights that investment in protected and separated bikeways is an investment in a safer and more prosperous city. For everyone – not just people who ride bikes.