This week our focus was on our third edition of the Brisbane Bicycle Film Festival (with thanks to our sponsors Maurice Blackburn Lawyers, The Lord Mayor’s Suburban Initiatives Fund, and Gabba Ward Councillor, Jonathan Sri). It was another fantastic night at the Brisbane Multicultural Centre in Kangaroo Point. We showed the Australian Premier of the inspiring Dutch film Why We Cycle to a full house and had a lot of fun watching the local films which we selected as finalists in our Epic Cycles Brisbane Bike Bites short film competition. This is our major fund-raising event for the year, so as well as building connections and community, it allows us to continue our advocacy efforts.

Of course, with cycling, the journey can be as important as the destination, and we had a ball travelling to the festival venue with Brisbane Style Over Speed, and the mobile band THEcycOz. Check out our album of fabulous photos.

Minister for Main Roads and Road Safety, the Honourable Mark Bailey MP joined us on the ride to the venue, and opened the film festival. We were excited to hear his announcement of $6.9 million in funding to rehabilitate some of Brisbane’s oldest bikeways (sections of the Centenary Cycleway, V1 Veloway, and Deagon Deviation and Ipswich Motorway shared paths). Riders from the Centenary suburbs were also thrilled to hear that the Sumners Road interchange project will include a direct link for the Centenary Cycleway, avoiding crossing 2 slip lanes and 4 lanes of Sumners Rd as per the existing arrangement, and according to the 2011 preliminary design. 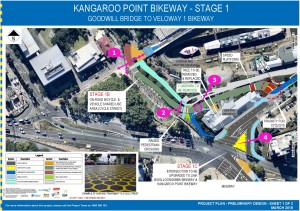 The big news from Council this week was the of plans for Stage 1B of the Kangaroo Point Bikeway. We’re pretty excited for this project to finally get underway, but still have a few suggestions on how it could be even better.

Also this week, online magazine Cycling Tips discussed cycling to school, and why many parents fear the disapproval from other parents, friends and teachers in encouraging their children to commute independently. They asked how accurate are our risk assessments, and are we denying our kids (especially girls) an opportunity to build confidence and enjoy physical activity every day?

Growth in Australian cities was in the news a lot, especially since Four Corners ran an episode on “Big Australia“. But it feels to us that the “experts” commentating in Brisbane can’t see past the big, expensive infrastructure solutions (where they may have a vested interest) while overlooking the relatively cheap, quick, and simple ideas that can create community and make a city delightful. We like this reminder from Janette Sadik-Khan:

“It’s possible to change your streets quickly. It’s not expensive, it can provide immediate benefits, and it can be quite popular. You just need to reimagine your streets. They’re hidden in plain sight.”

Cycling is catching on in Auckland, with their major newspaper even running a positive editorial about the benefits.  But a terrible tragedy in Brooklyn led New Yorkers to protest in the streets against delays in implementing anything like Vision Zero:

“Thanks to a decades-long legacy of cars-first planning policies, our streets were designed to move cars and trucks as quickly as possible to their destination with little to no regard for anyone else on the street.

This brought the era of wide, fast car lanes and big intersections that make city streets as friendly to motorists as they are deadly to anyone outside of a car. Vehicle throughput came first in policy priority, with vehicle storage coming in second.”

In London, cyclists are now the single largest mode of transport counted on city streets in the morning peak. But Londoners still manage to poke fun at themselves, and how difficult the journey has been and continues to be.

Finally, back at home, a few of us are planning 12 days of ordinary, everyday errands by bike, to complete an “Errandonnee“.