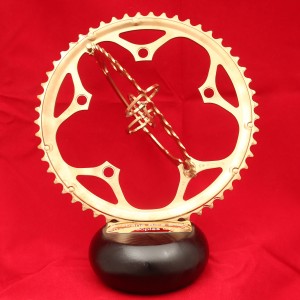 It was week to dampen the bodies and spirits of bicycle advocates in Brisbane, but we did achieve a victory for our fighting fund, selling out the Brisbane Bicycle Film Festival for the third year in a row! We’re very much looking forward to being inspired by the Dutch experience in Why We Cycle, and watching the locally made finalists in the Brisbane Bike Bites Short Film Competition. If you’re coming along on Friday night, you will have a chance to vote for the prestigious People’s Choice Award.

We couldn’t resist starting this week with a great illustration from Twitter which highlights why we do what we do – and why some people who already ride don’t always agree with us.

We also shared a great video on the importance of the bicycle to the women’s rights movement to celebrate International Women’s Day.

Locally, EaST BUG gave us an update on the Moreton Bay Cycleway at Wynnum North, which was the topic of this week’s presentation in the Public and Active Transport Meeting. Also in that meeting, Cr Cassidy tried to find out more about delays with the missing link in the Moreton Bay Cycleway on the north side (from Viola Place to Schneider Rd), and we were surprised to hear that a number of major bikeway projects (including the Land St tunnel, Kangaroo Point Bikeway, and Woolloongabba Bikeway) have been delayed from commencing due to the Commonwealth Games.

Across the other side of town, West BUG joined representatives from school P&Cs at Indooroopilly, asking Walter Taylor Ward Councillor Julian Simmonds for safety improvements for cyclists along Lambert Road between the railway station and Harts Road roundabout.

Also in the west, the Department of Transport and Main Roads is currently seeking input to guide future projects along the Centenary Bikeway between Richlands and Toowong, and the Moggill Road corridor including Brookfield, Kenmore, Chapel Hill and Fig Tree Pocket. Suggestions can be made via an interactive map until Tuesday 13 March, and we encourage anyone who rides (or would like to ride) on that side of town to get involved. 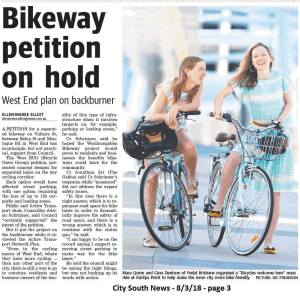 On Tuesday we heard from international expert in city leadership, Professor Greg Clark, who was the invited guest at the Lord Mayor’s “Plan Your Brisbane” forum, and spoke about what it really means to aspire to be a “New World City”. One of Prof Clarke’s his key points was:

Deciding that citizens have rights, rather than cars having rights is an important psychological step forward.

Unfortunately, that’s a psychological step Brisbane’s leaders have yet to make, as illustrated by the story in local newspaper City South News about their rejection of a projected bikelane along Vulture St on the basis that cars (both moving and parked) are simply too important.

In other news around the suburbs, we promoted and attended information sessions on planned road “upgrade” projects at Ashgrove (Waterworks Rd from Stewart Rd to Ashgrove Ave) and Annerley (Juliette St and Ipswich Rd intersection), asking why these plans do not include provisions to make walking and cycling safer and more convenient. We also called for support for Morningside Ward Councillor Kara Cook’s petition to provide free cross river travel between Bulimba and Teneriffe.

After years of fending off criticism from people vehemently opposed to mandatory helmet laws, and from people equally as vehement that they must never be changed, we finally wrote an opinion piece explaining why we felt it was an unproductive discussion. That of course sparked a furious and unproductive thread on Facebook in response, which rather proved our point. 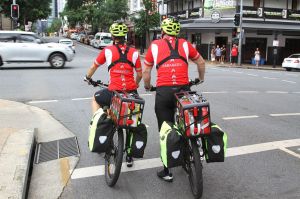 In other news, Queensland Ambulance Service this week launched their Brisbane team of first responders on bikes who are now operating in the city and inner suburbs. That demonstrates once again what a great tool bicycles are for moving quickly and efficiently through a busy city. We wonder if they’d like to join us for a Tuesday evening Slow Roll?

Finally, keeping up with global trends, this week we asked what Brisbane could learn from reaction to a tragedy in Brooklyn, and shared a great short piece from an expert in Smart Cities who points out that “no app will ever be able to do what a separated bike lane can.”