This week a new section of the North Brisbane Bikeway between Somerset St and Grafton St opened! Woohoo!!

Chris and Belinda went on a site visit to check out progress on the Ipswich Motorway Cycleway with Minister Mark Bailey and the project team. Much of the shared path along the northern side of the Ipswich Rd Service Rd is complete – including the new bridges across Oxley Creek. Work on the fully separated cycleway from Oxley Creek to Granard Rd is well underway. It’s also very exciting to hear that TMR have plans to complete the link at Granard Rd through to Balham St, and that they are looking at the business case for a “Griffith Connector” which would provide the missing east-west route across to the Veloway! We have advocated hard for these connections, so it’s very exciting to see progress. 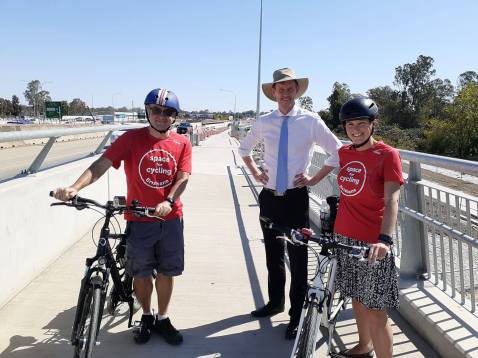 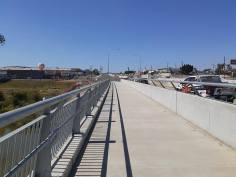 Back on the north side, the Department of Transport and Main Roads are currently consulting on plans for the “Northern Transitway“, which would implement bus lanes along each side of Gympie Rd between Kedron (where the Northern Busway currently ends) and Hamilton Rd (Chermside Shopping Centre). The bus lanes are proposed to be implemented in space currently taken up by parking, road shoulder, and median space, rather than reducing general traffic lanes. 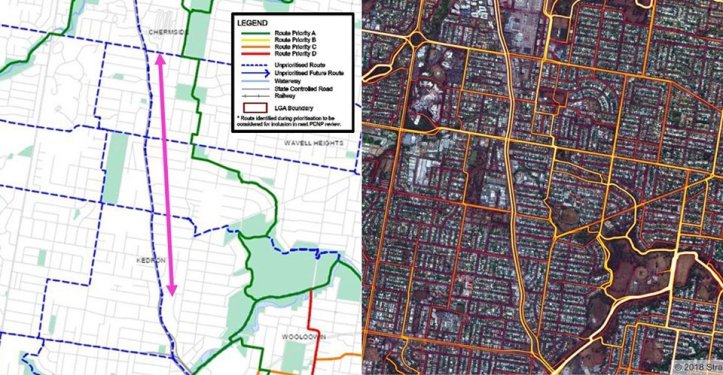 Under Queensland road rules, you can use a bus lane if operating a bicycle, so for keen on-road cyclists this is possibly good news. Removing car parking, and making all non-signalised instersections along Gympie Road left-in and left-out only will reduce some of the existing hazards along Gympie Road. But obviously many people aren’t going to be keen to ride among buses on a high-speed road. The project material mentions improvements to the existing pathways on both sides of Gympie Road along the corridor: “they will generally be upgraded to be 2.5m wide”. But while those wider footpaths might serve some local cycling trips, they generally aren’t suitable for longer trips.

Strava heatmaps show that plenty of people do ride on Gympie Rd, but for others that’s just not an option; they are still hanging out for a better North Brisbane Bikeway connection through to Chermside. Consultation sessions on the Northern Transitway plans are coming up, and there is more information on TMR’s website.

This week we congratulated Kath Angus and Sally Dillon for putting their hands up to run for, respectively, Lord Mayor and councillor for Coorparoo Ward, representing the Queensland Greens. Council elections are coming up in March 2020. Yes, we will scrutinise the Greens’ active transport policies as closely as other parties’. But it’s great to have a couple of individuals who need no reminding of the benefits of active travel, and the importance of making our streets pleasant and safe places for people of all ages, abilities, and incomes. 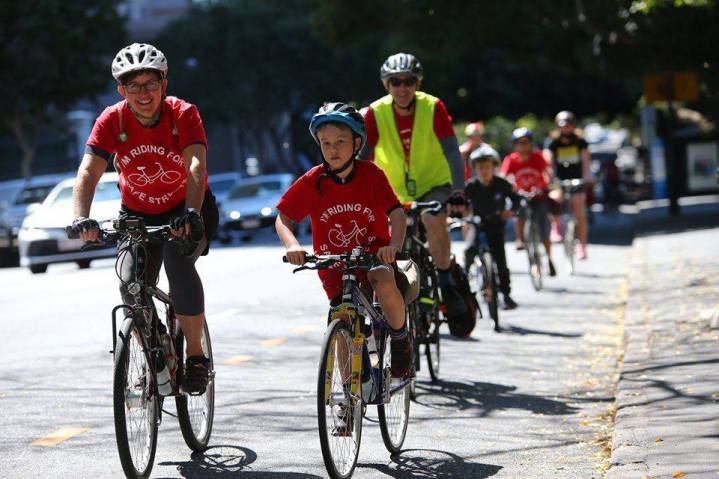 And for those who think no one rides a bike to hospital, the overflowing bike racks outside the Queensland Children’s Hospital say otherwise. 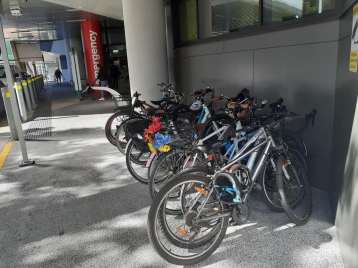 On the weekend, we went visiting. Starting with a trip to the Indooroopilly Shopping Centre where there was a good turn-out of people wanting to talk about Council’s plans to reconfigure the intersection of Moggill Rd and Coonan St. We had representatives from Brisbane West BUG, East BUG, Brisbane CBD BUG and Airport BUG, as we all either live locally or commute through the area now or in the recent past. There were plenty of reassurances that the options Council have put forward are only concept plans at this stage, without details of the walking and cycling connections. However, we remain skeptical. We’ve seen too many projects recently where the concept plans have been vague, but have then been used to rule active transport “out of scope”. Or where the final implementation doesn’t match at all what Council took to consultation. 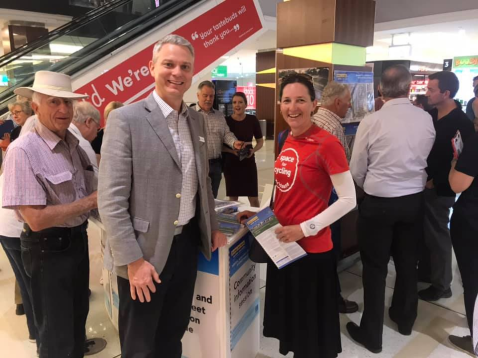 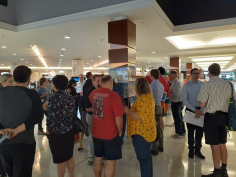 Thanks to local councillor Cr James Mackay for taking the time to discuss our concerns, and for his interest in proper cycling connections from the Jack Pesch Bridge and Indooroopilly Riverwalk. Both the Indooroopilly Shopping Centre and the businesses along Moggill Rd at Taringa are major destinations. Council must weigh the convenience of on-street parking and their desire to flush large volumes of traffic through the suburbs versus residents being able to safely access local business, services, and public transport by walking and cycling. We hope they can deliver a better balance here than in the past. 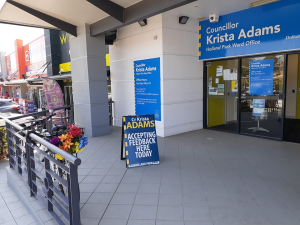 After cycling to Indooroopilly, Belinda set off to the other side of town to visit Councillor Krista Adams at her “open office” at the Holland Park Ward office in Mount Gravatt. As well as a number of local issues, one thing we were keen to raise was Council’s “active transport network plan” which has been discussed since 2012, but still not released. This plan is important to ensure that any significant road and intersection projects include suitable facilities for cycling, otherwise we can have great pieces of bikeway in the suburbs which completely fail to connect or link to meaningful destinations. Cr Adams assures us that the plan is coming…

Meanwhile, across town, Andrew caught up with Stirling Hinchliffe MP to talk about local cycling issues in his Sandgate electorate. In particular removing parked cars to make Sandgate Rd safer, and the recently announced motorway upgrade from Bracken Ridge to Bald Hills. We are keen to see a separated and safe cycling option included in that next section to allow people to safely cycle from Bracken Ridge to Bald Hills. Brisbane North BUG are hoping for a positive response from Minister Mark Bailey on that request.

Earlier in the week, in Hawthorne, Belinda and Rolf joined a crowd of locals concerned about safety on Riding Road  at a meeting called by Morningside Ward Councillor Kara Cook and Labor’s Lord Mayoral candidate Rod Harding. This was after two school-girls were hit on the pedestrian crossing near Pashen St recently, sustaining serious injuries. We’re supportive of calls to further drop the speed limit along Riding Rd, but are concerned that signalising the intersection of Riding Rd and Pashen St has potential to make it less convenient but no safer to walk or ride a bike. We’re written more in our latest blog post.

Sometimes in our travels we see something that just leaves us shaking our heads. A project to repair the bikeway through Balis Street Park in Holland Park West was allocated $257,000 in the 2018-19 budget for “Bikeway Reconstruction”. It’s a useful local link, so we were happy to see it upgraded. We were also happy to see it connected through to Sterculia Ave. But seriously, who thought moving the existing kerb ramp to create this offset alignment was a good idea?? 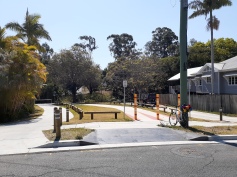 In better news: This time next year, we’ll be soaring over a bunch of dangerous intersections at Tarragindi on the SE Veloway. It’s looking awesome! 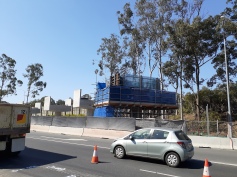 In Sydney they are seeing the benefits of fewer cars in the city; street space can be used to move people much more efficiently. Brisbane could have taken a similar approach as major projects like the Queens Wharf casino development and Cross River Rail have taken over some of our streets and footpaths. Instead, Brisbane seems determined to prioritise people who drive to their offices in the CBD while everyone else is squeezed into what little space is left over. It’s time to de-clutter the footpaths, and to build protected bike lanes so people in Brisbane can get around by bike and scooter (and whatever electric micro-mobility device comes next).

Studies consistently reveal that around 60 per cent of people would consider taking up riding a bike for transport if they could find a low-stress network for their daily trips. But having to travel on a main road with fast-moving traffic for even part of a trip is often the deal-breaker. A recent study in Toronto looked at how many jobs were accessible to people via a low-stress bike route, and the answers help explain why Toronto has lower rates of cycling than other comparable cities.

Like Toronto, Brisbane needs a connected network of protected bikelanes, dedicates paths, and low-stress streets that connect people where they need to go. Not everyone wants to ride a bike, and not everybody can. But many more people would if it felt safe and comfortable!

Also from Toronto, comes yet another study showing that bike lanes boost business. Whenever a bike lane is proposed, retailers complain, “It will kill our business,” and drivers complain they won’t be able to shop. But time and again, when the effects are studied, the results are the same: where protected bike lanes have been built, business got better and sales went up. Every. Single. Time.

Finally, it’s hard for people who are conditioned not to see it, but – as this ABC news article points out – there is no such thing as “free parking”. “We’ve converted a desire to park free into a planning doctrine where nothing new can be built unless it has ample parking.” This fallacy of ‘free’ parking is making cities more expensive — even though we might not necessarily know it. “One of the things about car parking is that it’s often very invisible to us despite how incredibly ubiquitous cities in our cities.” Imagine what that space could be used for instead of providing “free parking”. Anyone want some more space for people to cycle and walk?