In Hawthorne this week, Morningside Ward Councillor Kara Cook and Labor’s Lord Mayoral candidate Rod Harding addressed a crowd of locals concerned about safety on Riding Road. This is after two school-girls were hit on the pedestrian crossing near Pashen St recently, sustaining serious injuries. (Fortunately they are recovering well, and we thank them for their bravery in speaking out.) 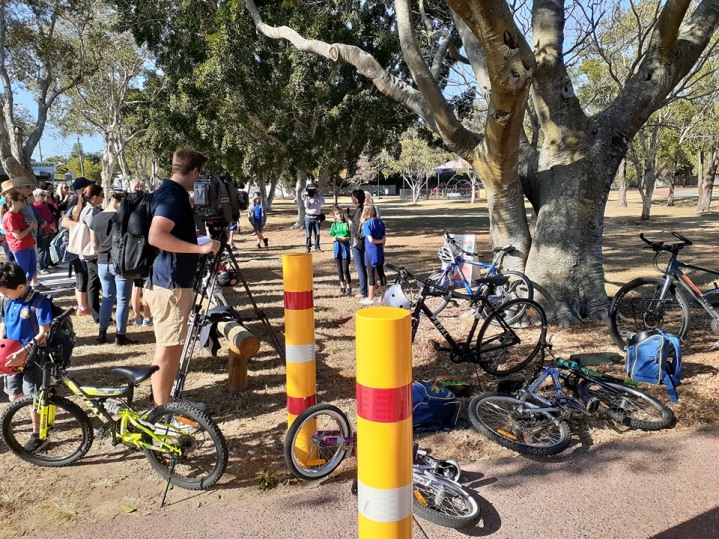 The speed limit along Riding Rd was recently reduced from 60kph to 50kph as a result of feedback on Council’s Move Safe review. But we agree with Cr Cook and many others that it doesn’t go far enough; a further reduction to 40kph would be consistent with the 3 school zones along the road, and make for a much calmer, safer, and more pleasant local environment.

What we’re less sold on is the proposal to signalise the intersection of Riding Rd and Pashen St and/or to move the pedestrian crossing away from the desire line.

Unfortunately we know that Council’s standard intersection treatment is likely to make things worse for people who aren’t driving: forcing long beg-and-wait delays for people simply wanting to cross the street, removing the on-road bike lanes (such as they are) on Riding Rd to ensure drivers aren’t delayed behind vehicles waiting to turn, and making it almost impossible to safely turn right when riding a bicycle.

Alternative, safer intersection treatments are possible, and potentially much less expensive. Raised intersections have been used by councils in South Australia (see for example this one in Kent Town), by VicRoads, and in many places internationally (for example: Boulder, Colorado) to slow traffic through intersections like this – both signalised and unsignalised. We’re keen to see a thorough review of alternatives, rather than a rush to “bust congestion” which merely results in making it less convenient but no safer to walk or ride a bike.