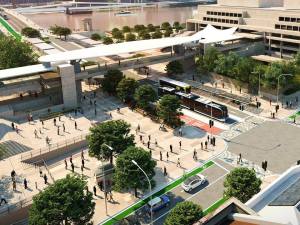 You may have seen this week that Brisbane City Council have announced a preferred tenderer for their Brisbane Metro project, and that there have been some changes to the design—most notably that it won’t involve construction of an underground station at the Cultural Centre. Instead, it seems the existing Cultural Centre Station will be upgraded, with a third platform added to help deal with the current bus queuing issues. We think that’s a sensible pragmatic approach to move forward with the project, but are interested in the implications for cycle connections.

The revised concept for the Cultural Centre Station actually aligns quite well with what Brisbane CBD BUG proposed 3 years ago: 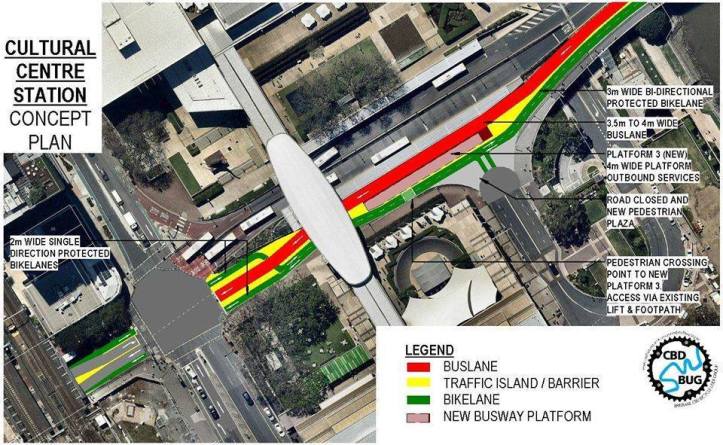 At that time, our recommendation was for a bi-directional bikeway on the downstream side of Victoria Bridge because that allowed for:

Later, the main reason given by the project team for why the upstream side was chose for the cycleway instead was better options to link to future CBD bikeways. We’re concerned now to see an artist’s impression in which the bikeway appears from nowhere at the corner of Adelaide St and North Quay – as if cyclists are expected to reach it by riding on the footpath on Adelaide St.

Obviously artists’ impressions are limited, so we are very keen to see more detailed plans. We have so many questions… 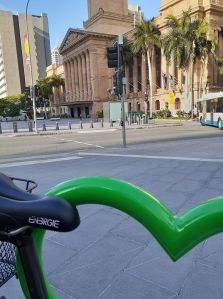 We were in City Hall as usual on Tuesday morning, observing Council’s Public and Active Transport Committee and Infrastructure Committee meetings. Public and Active Transport heard a presentation: A History of Brisbane’s Cross River Bridges and the Green Bridges Program. The 1926 Cross River Bridge Commission was mentioned… So far only half their recommendations have been implemented…

But almost 100 years later, there is finally good news for people in the inner eastern suburbs, as Lord Mayor Adrian Schrinner has announced plans to fast-track delivery of the CBD to Kangaroo Point pedestrian and cycle bridge. This will certainly make the city more accessible by active transport from the eastern suburbs.

We look forward to seeing more details of the bridge design; in particular we hope the lessons have been learned about separating bike and scooter traffic from foot traffic, and the importance of shade.

We’re also keen to see plans for good links at either end of the bridge. At Kangaroo Point, an accessible underpass across the peninsula (without stairs!), good connections along Main St and Shafston Ave, and improvements to the riverside bikeways towards South Bank and Mowbray Park. On the city side, connections into the heart of the CBD along Edward St and at least one of Margaret St (our pick), Mary St, or Alice St.

In Tuesday’s Council meeting, they discussed the response to a petition to paint clearer bikeway markings on the Kangaroo Point Bikeway between the Veloway and Thornton St. While the immediate response might be disappointing to the petitioners, Cr Ryan Murphy’s words invite optimism.

For context, local councillor Cr Jonathan Sri, Councillor for The Gabba explained why he opposed the petition response: because it doesn’t commit to clear course of action in a defined timeframe. Committing to “investigating” more permanent bikeway upgrades is a good start, but residents have been raising these issues for years, and it’s time to commit to *action*.

In response, Cr Ryan Murphy stated clearly for the record that Council are committed to upgrading this section of bikeway prior to the new CBD to Kangaroo Point Bridge coming online – which is intended to be before the end of this council term (2024). He acknowledged that the potential for conflicts on the current path is significant and dangerous, and stressed that Council are “not kicking this into the long grass”; they are fully committed to resolving the issue. That’s good news, and hopefully we will see evidence of that commitment in the upcoming budget.

Just across town, there’s bad new for people wanting to cycle to the CBD from the northern suburbs. This week we were informed by the Cross River Rail Stakeholder Engagement Team that work on the rail project at Spring Hill will require closure of the “Grammar Path” for at least 6 months from June 22. The nominated detour is via College Rd and Gregory Tce.

Together with Bicycle Queensland, Brisbane North BUG, Brisbane CBD BUG and Airport BUG, we have written to Cross River Rail explaining why it’s unsatisfactory to simply close this vital link between the CBD and Brisbane’s northern suburbs without taking steps to provide a detour that is safe and suitable for people who are not prepared to ride on the road in busy traffic. We provided recommendations for making the detour route safer, and improving Gregory Terrace in the longer term. 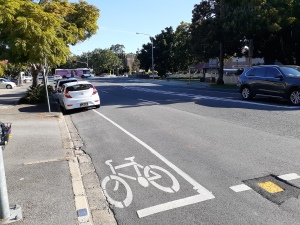 We’ve copied in Main Roads Minister Mark Bailey MP, local councillor Cr Vicki Howard, and Council’s Public and Active Transport Chair Cr Ryan Murphy, as this will require the Queensland Government and Brisbane City Council to work together to take the urgent steps necessary to keep cycling between the CBD and northern suburbs open, not just for the “strong and fearless”. You can read our letter on our latest blog post. 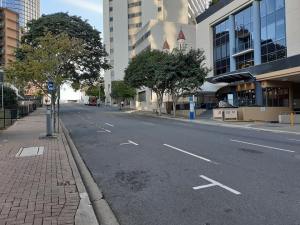 This was Margaret St in the CBD on Friday afternoon. We’ve campaigned for the right-most of the 4 lanes to be converted to a 2-way separated bikeway as part of a CBD Grid. Currently that lane is mostly used for on-street parking. Surely car parking in the CBD is something that should be left to the private market rather than subsidised by donating valuable public land for the benefit of very few people?? Other kerb-side uses—including loading zones and space for buses and taxis—could all be consolidated to the left side of the street. It’s high time for Brisbane let go of an unhealthy obsession with on-street parking, and bring life back to our CBD streets. 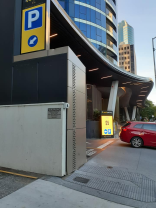 In Melbourne, they have realised that on-street parking is a very poor use of valuable inner-city public space. So they’re building protected bike lanes instead! Over the next 2 years they will fast-track 40km of new separated bikeways, creating a highly connected grid in the CBD, and improving connections from the surrounding suburbs. The first 20 kilometres will be delivered in 2020-21 at a cost of just $16 million!

Council’s Opposition Leader, Cr Jared Cassidy was on ABC Brisbane radio this week with Craig Zonca and Loretta Ryan talking about popup lanes in Brisbane. The Labor for Brisbane team launched their Brisbane Mobility Plan last week which focuses on rapid improvement for cycling and walking infrastructure as we start to come out of COVID19 restrictions. The plan includes quick-build facilities like popup bike lanes, which Cr Cassidy explained could be created with temporary barriers like plastic bollards or water barriers. The value of popup facilities is you can test how well they work before committing to permanent changes in concrete if the trial is successful. 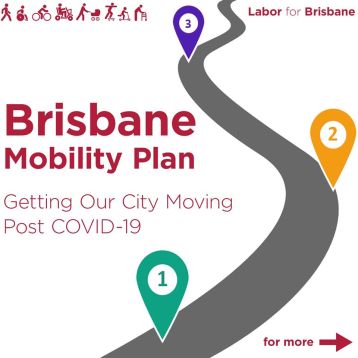 Bicycle Queensland has proposed a solution to Council which is being considered, and we’ve been pushing for a CBD grid for 5 years. Cr Cassidy recognised the efforts of the cycling community in putting this on the agenda. You can listen to the interview with Cr Cassidy from the 1:49:50 mark at this link.

Are you one of the many thousands of people who have recently started (or restarted) cycling? How confident do you feel about cycling in conditions like this on Annerley Road? What advice would you give to your children, parents, or friends about cycling in these conditions? Some might suggest the onus is on you to take an educational course to make yourself feel safe, but we say that’s gaslighting; the problem is not you, it’s the infrastructure. Work like this should not be approved without satisfactory traffic management!

In the south, there was a more pleasant surprise this week, as we discovered that the Salisbury Bikeway along Riawena Rd, is currently closed for work between Orange Grove Rd and Regis St, until August. The detour is fairly straightforward via Golda Ave. (There’s a bit of a climb up to St Pius X Primary School, but the footpath is an option, and Regis St has recently been resurfaced.)

This section of the Salisbury Bikeway has been in a poor state for a long time, so we’ll be very happy to see it upgraded to match the stretch between Regis St and Tuckett Rd, which has been rebuilt in a couple of stages over the last 2 years.

And of course we can’t let a week go by without a report on progress on the Birdwood Rd Veloway link; it’s looking good. Most of the concrete has now been laid for the main path, and this week the underpass got a makeover. Technically there are still 2 weeks until the “mid 2020” completion date for Stage E, and our prediction is that the crew will make that easily. Any day now!! 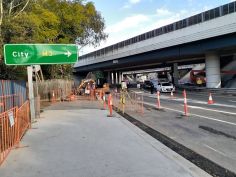 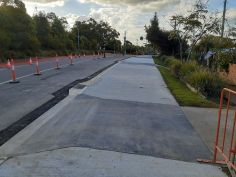 This is also a good reminder that per dollar invested, building bikeways creates around 40% more jobs than building or widening roads, and almost double that of road resurfacing projects. For governments of all levels looking to stimulate the economy, create jobs, support local businesses, cut environmental emissions, and keep the community healthy, safe and active, bikeway projects come out on top!

This is spot on! Bicycle Network CEO Craig Richards provides a great explanation of the top 10 things to know about making our city a safe and comfortable place for anyone to ride and everyone to live: