But first, look! A pop-up protected bikeway on Mary St in the CBD!

Sadly no. (Sorry to get your hopes up) This is a temporary lane deliminator while the road is reconfigured and some of it has been taken over for construction work on the Albert St station.

Speaking of protected cycleways, here’s 40 seconds worth watching: a perfect illustration of the difference between paint and actual protected bikeways. Where would you (and your family) rather ride?

This week, Council’s Public and Active Transport Committee heard a presentation on “Embracing the Brisbane River in Transport”. Much of the discussion related to ferry terminals and vessels, but there was also some mention of riverside bikeways, including the recently completed Kangaroo Point Bikeway Stage 1, Botanic Gardens Riverwalk, and Indooroopilly Riverwalk where piling is currently underway.

With mention of future upgrades to the Dockside ferry terminal, Jonathan Sri, Councillor for The Gabba asked if Council are considering finally extending the riverwalk from there around to Mowbray Park. (This has been the subject of community petitions in 2013 and 2018, and has been in the Local Government Infrastructure Plan, but has not been provided even as more and more high-rise developments have been built in the Kangaroo Point peninsula). Unfortunately Cr Ryan Murphy confirmed that this riverwalk is not even at concept stage – although he did provide assurance that the Dockside ferry terminal would be designed to be “future-proof” in terms of not excluding any continuation of the riverwalk in future. It seems that south-siders will be having to keep climbing the steep hills through Kangaroo Point for a few more years yet.

Also discussed was a petition to paint the Kangaroo Point Bikeway between the Veloway 1 and Hamilton Street, “with current standard bikeway markings to improve safety and flow”. 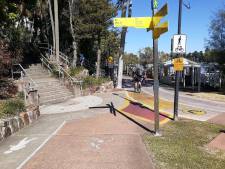 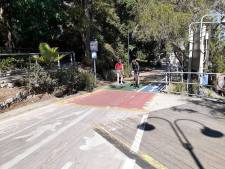 The current pink, yellow and red markings near Thornton St were done 2 years ago, and haven’t held up particularly well. From our observations, they also don’t seem to have made much difference in behaviour; there are simply too many narrow sections and crossing points where people get confused about where they should be walking. That’s effectively the point Cr Murphy made in response; Council has determined that the conflict and confusion isn’t going to be solved with coloured paint. We tend to agree.

Cr Sri asked the pertinent question: so how will the issue be addressed through this area? Is there a plan for Kangaroo Point Bikeway Stage 2?? The short answer seems to be: right now, no. 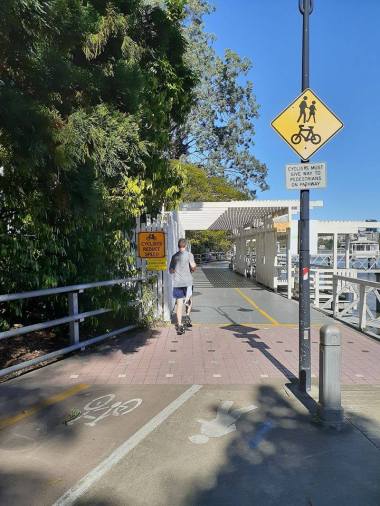 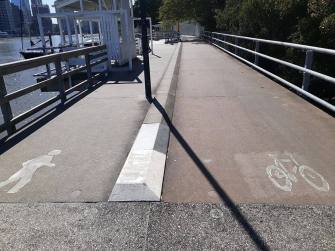 On Tuesday morning, a group of Dutton Park residents met with workers and union representatives at the new school site, between Gladstone Rd and Annerley Rd. Everyone is concerned at how poorly safety is being managed on this project. Political and commercial pressure with regard to timing and budget seems to be prioritised ahead of safety and fairness to nearby residents. 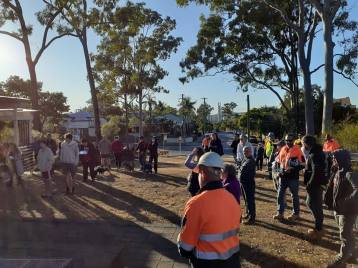 What’s also incredibly disappointing is that the end result doesn’t look good for active transport. The school site sits between major existing cycling routes, and key public transport nodes, and yet the plans do nothing to enhance access; in fact the opposite. Somehow, active travel for future students seems to be treated as an afterthought rather than a priority – which is totally counter to the Department of Transport and Main Roads’ technical guidance on “Planning for Safe Transport Infrastructure at Schools”.

Our petition to Parliament regarding the Gladstone Rd intersection – which is part of this project – has gone to Transport Minister Mark Bailey MP for response. We hope he and Education Minister Grace Grace MP can work together for a better outcome.

On a brighter note, there was plenty of activity on the Veloway link at Birdwood Rd this week. It’s good to see improvements to the footpath on the lower level, too—including completing it through to the pedestrian crossing. 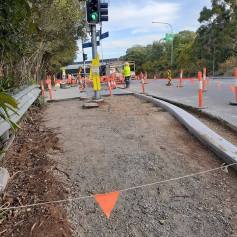 Across town, thanks Brisbane North BUG for the update on Friday this week: the Jim Soorley Bikeway is now open again for those able to navigate the temporary structure:

We’re cautiously optimistic about this week’s announcement from Mark Bailey MP (Member for Miller), Jess Pugh MP (Member for Mount Ommaney) and Cr Nicole Johnston (Tennyson Ward) that the State Government and Brisbane City Council have signed a memorandum of understanding to widen the Oxley Rd rail underpass at Corinda.

Oxley Rd is identified on the Principal Cycle Network Plan, but is currently far from cycle friendly along most of its length. It’s choked with traffic during peak periods, and feels fast and hostile at other times. Placing more emphasis on safe and attractive active transport would help local businesses, reduce traffic congestion around schools, and make public transport more accessible and attractive. Starting with the obvious pinch-point at the rail underpass is a sensible move, and we hope the works consider the need for a safe cycling corridor through Corinda and Sherwood, and how this fits in with the long term plan for Oxley Rd.

It’s great to see the bike boom continuing as people head back to work. There are some very positive messages from Council’s new Public and Active Transport Chair, Cr Ryan Murphy too. Could Brisbane soon have the grid of protected bikeways in the CBD we so badly need to allow people to comfortably cycle all the way to the office? Getting bikes and scooters into their own lane will be great for city mobility, and will help bring life into the CBD on weekends, giving a boost to businesses that have been doing it tough.

Catch up in case you missed the segment on 7NEWS Brisbane on Monday evening (Also featuring Bicycle Queensland‘s CEO Rebecca Randazzo, and Transport Minister Mark Bailey MP who we know has been commuting by bike recently.

Patrick from Brisbane North BUG captured these images which speak volumes. Who do you think beats the school bell… 🤔 🚙🛴🚲 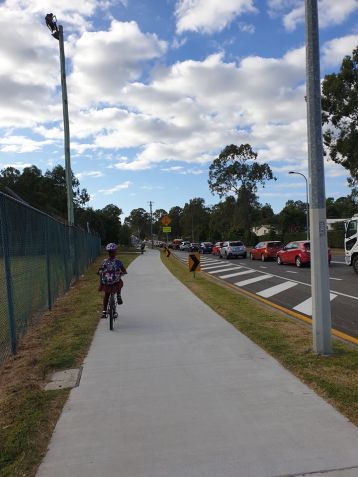 We heard in Council’s meeting last week that BCC performed reviews of traffic in local streets around two representative primary schools—Dutton Park State School and Wynnum West State School—in the week that Prep and Year 1 students returned to school. In both cases, there was a significant increase in traffic volume on local streets (up by 7.5% increase). And that’s before grades 2-6 returned to class!

Whichever way you look at it, there is a huge amount to be gained from investing in good paths and safe crossings so that families don’t feel they have to drive their children to school!

The number one reason women don’t cycle: the roads are not safe. Yet another study has found that many women don’t ride because of the absence of dedicated cycling paths. They also fear for their personal safety and want better street lighting, plus end-of-trip facilities to give them the option to change or freshen up if they’re cycling to work.

There’s no mystery. As Stephen Hodge from We Ride Australia points out in the Sydney Morning Herald:

“When the cycling environment is safe, convenient, attractive and direct, then women will choose to cycle for their short daily trips in large numbers. When they feel safe, they will encourage their children to cycle or walk to school.”

Wednesday, June 3 was World Bicycle Day—declared by the United Nations to acknowledge the uniqueness, longevity and versatility of the bicycle. A simple, affordable, reliable, clean and environmentally fit sustainable means of transportation.

There was even a positive story about cycling in the Courier Mail this week!

It’s a bird’s eye view of the two-wheeled revolution taking over our city since lockdown – more and more of us are cycling to stay fit and get to where we need to go. Stunning drone imagery shows dozens of cyclists using the Kedron Brook Bikeway in what its photographer believes will become an “historical document” illustrating how the COVID-19 pandemic helped us rediscover our love of walking and cycling. We agree with his assessment: “I think cycling’s going to continue to grow. However, to do this, will require gaps in the network to be filled. We have some great bikeways, but what if you’re not near a bikeway?”