The week got off to a good start for riders on the east side who discovered early on Monday morning that the new bikeway and shared path along Lytton Rd in East Brisbane was open. This was part of Council’s project to widen Lytton Road, and  includes a separated cycleway from Norman Creek to the corner near Esgrove St, and a shared path west from there along the front of Mowbray Park. In future we’d love to start seeing more paths like this without having to wait for them to be included in a wasteful road widening project!

It’s not all rosy however. The situation west of Esgrove St sees cycle and pedestrian traffic mixed on a shared path, which is not ideal for a major bikeway. Worse, at the intersection with Park Ave, path users are not given a priority crossing. That’s despite there being plenty of space to provide for turning vehicles without having them block the path. Park Ave is a short residential street servicing a small number of apartment buildings and the car park for Mowbray Park and the ferry terminal. In contrast, Lytton Rd is designated as a primary cycle route. 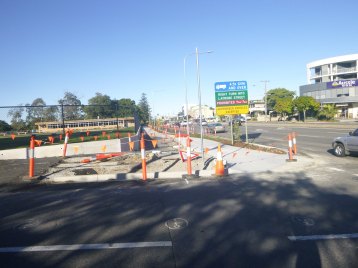 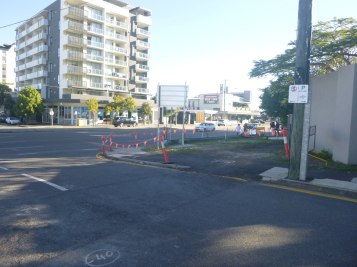 This is an issue East BUG and others have raised multiple times with the project team since preliminary plans were first released in 2014. It’s disappointing that Brisbane City Council seem so resistant to best practice (and to Queensland Government technical guidelines) while other local governments can apparently make better choices – as seen in the examples shown here from Mooloolaba and Adelaide. 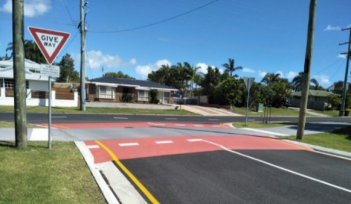 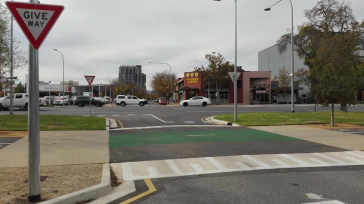 Just two days later there was more good news in the inner east, with the missing piece of the Woolloongabba Bikeway on Stanley St near Reid St finally finished and open. Woohoo! 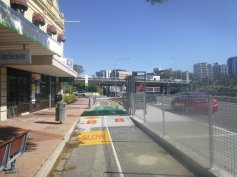 Unfortunately there was no such good news to report at Howard Smith Wharves, with this article in the Brisbane Times reminding us that there has still been no action to fix the gravel path. The revamped Howard Smith Wharves have quickly become a favourite venue for thousands of Brisbane residents and visitors. But for people who need to get home that way – by walking, cycling or scooting – it has become a nightmare. If the space had been planned well in the first instance, it could have served as both a great venue AND a route that encouraged healthy travel. Previous Lord Mayor Graham Quirk acknowledged the problem with the sketchy surface and the confused mixing zone, and promised Council would move quickly to resolve it… but that was back in March. He has moved on, and the mess remains.

Will Council take responsibility for the state of this development they approved at the 11th hour – despite it not meeting the standards they specified. Or will they just continue to pretend it’s not a problem? Is anyone paying attention to the lessons for future developments at North Quay and Eagle St??

On Tuesday, representatives from the Brisbane BUGs joined the Safer Roads, Safer Queensland road safety summit, which we’ve written about in our latest blog post. Later that day, Chris spoke on ABC Brisbane Radio‘s Afternoons program with Kat Feeney about the forum. You can listen in from 1:36:00 here.

Progress is looking good on the South East Veloway at Tarragindi as the Courier Mail reported on the girders being lifted into place this week. This raises the standard for bikeways! (And no, not all bikeways have to be multi-million dollar elevated structures. But key spines like the SE Veloway, Centenary Bikeway, North Brisbane Bikeway, and Gateway North Bikeway, together with connecting routes between, make getting around the city by bike safe, convenient, and enjoyable. Sure beats sitting in traffic!). As Minister Bailey says, “everyone’s a winner with this project“. That’s so true; investment in high-quality bikeways pays dividends – it makes the city better for everyone. Bring it on!

Earlier this week, TMR advised that construction will commence on the Sumners Road Interchange Upgrade (SRIU) in late-July 2019, and is scheduled to finish in late 2021. The project will include a grade separated cycle track, built as an underpass below the western intersection which will be a huge improvement for the Centenary Cycleway. This is in no small part due to lobbying from Brisbane West BUG, and the support of local member Jess Pugh MP for Mount Ommaney. Advocacy matters!

Thanks to one of our Brisbane North BUG members for spotting an update on TMR’s plans for the new Everton Park Link Road, which will connect South Pine Road, north of the Kedron Brook Creek, to Stafford Road, east of Mountridge Street. One of the claimed benefits is that it will deliver “increased connectivity for cyclists with dedicated facilities including a link to the Kedron Brook Bikeway”, so Stephen went along to one of the community information sessions on the weekend to find out more. He spoke to one of the designers from TMR, and was happy to report that they seem to have adhered to the latest design standards for cycling facilities, and the plan seems to make good provision for people travelling by bike. Read more on our latest blog post. 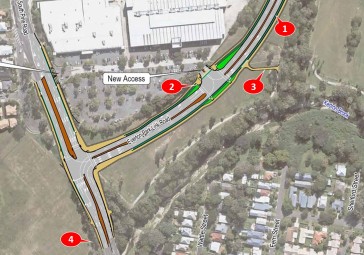 Finally, at Yeerongpilly, we took a look at the revamped section of King Arthur Terrace between the Tennis Centre and Fairfield Rd which is now open for business after more than 18 months of closures and diversions.

There’s a new shared path that connects to Ortive St, taking a similar but somewhat steeper route compared to the old one. It connects nicely through to Ken Fletcher Park which makes for a nice ride along the riverside. Connections to King Arthur Tce itself are a bit awkward for cyclists, so we expect that most river-loopers and commuters will prefer to stick to the new on-road bike lanes which are nice and wide at 2m. This new section removes the previous traffic-calming chicanes and raises the speed limit from 40 to 60km/h. It will be interesting to see what effect this will have on rat-running through the area.

Around Australia and the world

It was good to see more positive coverage of cycling in the media, with ABC Life running a story on “The benefits of leaving your car at home once in a while“. Reducing your reliance on your car is not only good for your health, but also good for your wallet. You might not be able to (or want to) go cold-turkey and ditch the car altogether, but once you discover other ways to travel you might start finding driving a little cumbersome.

Going by bike means never having to look for a parking space, not worrying about getting stuck in ”traffic”, discovering your neighbourhood at human speed, and being able to stop for a chat when you run into friends (or friendly pets and wildlife) on the bikeway.

On the other side of the world, the protected bikeway across Vancouver’s Burrard Street Bridge has just turned 10! When it was first installed, there were the usual hysterical predictions that it wouldn’t be used, and that closing one lane to general traffic would put the whole city in gridlock. Fortunately, Vancouver had city leaders who were prepared to stare down the criticism, and the predicted “chaos and congestion” didn’t materialise. The bike lane is now the busiest in North America, and has recently been expanded.

Perhaps back in 2009, it might have been fair to say “We couldn’t have predicted how popular cycling would become if you made it safer for people” – if you were prepared to ignore the evidence from European cities. But that is no longer true.

With good infrastructure, cycling is for everyone. But signs are not infrastructure! This week we visited Bulimba, Morningside, Nathan, Woolloongabba, Wavell Heights, and Oxley, and spotted a koala on the way home through Toohey Forrest. It’s time to get on with lighting paths in Macgregor and Moorooka.

Big news: public eBikes are coming, and the Indooroopilly Riverwalk is open! The Cultural Centre Riverwalk is back in service, but who knows about the GoBetween Bridge. We discuss elevators, underpasses, bridges, drainage, and bollards – lots of flexible bollards. This week’s feature suburbs: Morningside, Norman Park, Carina, and of course Indooroopilly.

A huge week, with our sixth bicycle film festival and a win for bikes on trains. But a tragedy in Woolloongabba reminds us how much is left to do. Green bridges are back in the news, with attention finally turning to Bulimba. Around the suburbs we report the latest news from Mount Gravatt East, Morningside, Stones Corner, Kangaroo Point, Carseldine, Brisbane Airport, St Lucia and Indooroopilly.

This week: alignments announced for the next two green bridges, and the Goodwill Bridge is finally back to full width. We talk congestion and the climate crisis, and how bikes are part of the solution. Good news on the Indooroopilly Riverwalk and active transport provision on the new Everton Park Link Road. Don’t forget your tickets to the Brisbane Bicycle Film Night!