The week started with good news on the Gabba Bikeway, with a small but significant change at the intersection of Stanley St and Merton Rd. The signs and markings have been changed back to the original configuration, with turning vehicles reminded to give way to people using the cycleway. This is a win for persistent, polite lobbying, and we thank everyone who helped out. Thanks also to Councillor Krista Adams for listening to the feedback, instigating a review, and following up to get the problem fixed.

On the topic of the Gabba Bikeway, a number of media organisations barfed up a Reddit thread and tried to pass that off as journalism. News Corp ran an online article triggered by a Reddit user posting a sulk about having to stop at a traffic light behind a group of cyclists on Stanley St in South Brisbane on the weekend. We took a look and observed:

Meanwhile, an interesting article in the Brisbane Times appeared to blame urban congestion on the rise of light commercial vehicles – particularly tradies. Yes, better logistics might help improve that 6% of city traffic, but surely there are more gains to be made with the 86.5% of urban road traffic made up of passenger cars?! It’s time to finally admit the emperor has no clothes, and get serious about reducing the number of private passenger vehicles in the city!

In more positive news, we received the official word on the “Goodwill Extension” part of the Bicentennial Bikeway (between the Goodwill Bridge and 1 William St): it will be open by the end of October. We’re very much looking forward to that! What we can see looks fabulous: 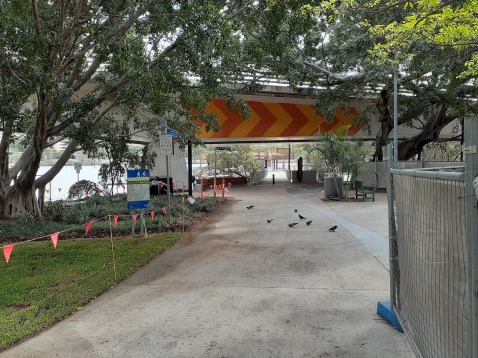 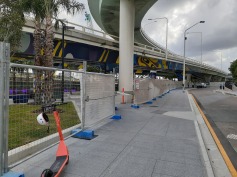 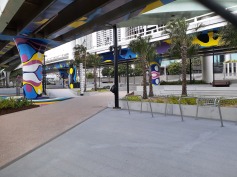 We were also pretty excited to see this fly-through animation of the M1 Logan upgrade project which will extend the Veloway south from the Gateway Motorway (where it currently terminates rather abruptly at Eight Mile Plains) to Paradise Road at Logan Central.

We’ve also noticed a couple of new bike repair stations around the city: one in the Roma St Parklands at the bottom of the Normanby Bikeway and one on Kingsford Smith Drive near Bretts Wharf. You can hang your bike while you make repairs using tools provided, or put some more air in your tyres. We were happy to find that the pump works for either presta or schrader valves… we support both types of cyclist in Brisbane! 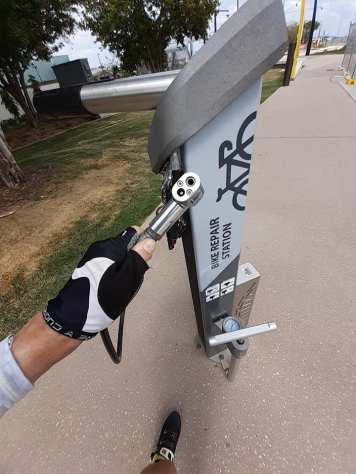 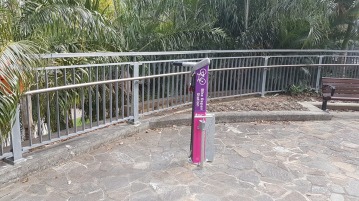 From Council: we pleased to see proposed changes on Dornoch Terrace, West End to improve safety for cyclists and pedestrians. The concept designs deliver bike lanes from Gladstone Road to Hardgrave Road, and a shared zone from Hardgrave Road down Ganges Street which will be 30km/hr and marked with a raised platform.

The plans include removing over 100 on street carparks, and what’s exciting is that the local community is right behind the need to prioritise the safety of people walking and cycling over the convenience of parking on the road.

While larger groups of cyclists doing the river loop may still choose to use the general traffic lane, particularly down hill, adding bike lanes with some protection will make it more comfortable for those riding in smaller numbers, or those just getting from A to B, particularly when slogging it up the hill.

On ABC Radio on Friday morning, Jonathan Sri, Councillor for The Gabba was strongly in favour of the plans, and we back his suggestions that Dornoch Terrace have its speed limit lowered to 40km/hr, and that additional zebra crossings for the safe, priority crossing of pedestrians be considered in this project. (Listen here from 2:07:30). You can review the plans and have your say at the consultation page Brisbane City Council has provided.

Driving is not just an air pollution and climate change problem – it turns out that tyre dust and fragments are the largest contributor of microplastics in coastal waters. 300 times greater than what comes from microfibers washing off polyester clothes, microbeads from beauty products and the many other plastics washing down our sinks and sewers! Banning plastic bags and microbeads, and working as individuals to minimise the plastics we use every day is worthwhile, but it’s crazy to ignore the biggest culprit: too many cars and too much driving!

There’s a lot of sense in this article about Carmel, Indiana, where cycling is booming, with 160km of dedicated bikeways and requirements for cycling infrastructure and bike parking in all new developments. Being bike friendly is not a left or right issue—it comes down to good economics, good urban planning, and good politics. Importantly it requires recognition that cycling should be part of the transportation system, not merely a recreational pursuit.

There are encouraging signs that Brisbane is coming to the same realisation—a recreational bikeway you need a car to get to doesn’t deliver nearly the same economic benefits as a connected network that allows people to use bikes for safe, convenient transportation. We have some great bike paths in Brisbane, but we still have a lot of work to do!

Meanwhile, here’s to the non-drivers: they decongest the roads and the health system with obesity-busting walking and cycling habits. The article is from Sydney, but we’re wondering: will Brisbane choose to follow the path that London is taking – where 71% of people never drive, and the bicycle has become the most popular vehicle of commuter transport – or continue on our current trajectory; ugly and car-obsessed?

If you want to tackle the problem of congestion (i.e. too many cars in your city) you should look at removing parking. Delhi has, and their city’s new parking policy is that on-street road space should be utilised for general convenience of users in the following order of priority:

When people give cycling for transport a go, they’re almost universally surprised by unexpected benefits. People expect to get a bit fitter and save some money, but finding themselves arrive at their destination early, seeing their city in a whole new light, and the joy of spontaneous social interaction on their commute are pleasant surprises. And like Ryan Ariano does with this story, you just want to share that joy.

Finally, for any of our followers who are members of Bicycle Network, here’s a recommendation for two candidates who would be great members of the board:

Faith Hunter produces Yarra Bicycle Users Group Radio on 3CR, and is keen to see Bicycle Network reaching out more to grass-roots community cycling groups and supporting the people who are working really hard on the ground to get better local cycling infrastructure.

Jenica Brook runs the rather awesome page Melbourne Commuter in her spare time, amplifying the work of the local BUGs. She has been working hard work advocating for better outcomes for cyclists in major projects such as Melbourne’s level crossing removal program and wants Bicycle Network to do more of the loud-empowered advocacy that members want, and to increase their support for every-day cycling.