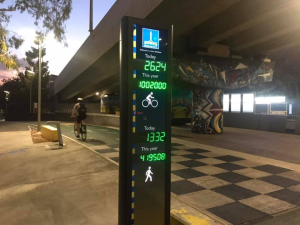 Some time over the long weekend, the counter on the Bicentennial Bikeway hit the 1 million rider milestone! That’s about a week earlier than last year, and shows what can be achieved with high quality infrastructure. People want healthy, convenient travel options – but it has to feel safe!

Now if only we can get improvements on the feeder routes along Sylvan Rd and through Toowong and St Lucia. And of course something at the city end; a grid of protected bikelanes in the CBD!

Isn’t separated space great? Now check out how the “shared zone” is working in practice at Howard Smith Wharves; people can’t even reach it because it’s jammed full of cars.

So let’s take a closer look at the short section in front of the hotel at Howard Smith Wharves in the daylight: According to the plan, cars are supposed to circulate in front of the hotel, dropping off or picking up passengers, and then giving way to path users as they turn back to exit the site. The slightly lighter pavement closest to the river (where the trucks park) was intended for pedestrians, while apparently people on bikes are supposed to ride to the right of the concrete island and the sign saying “KEEP LEFT”, and into the oncoming cars.

Brisbane CBD BUG are still waiting for a response back from the Lord Mayor to their latest letter. This area needs to be returned to a legible public thoroughfare, with motor vehicle access restricted to people with a disability permit, and goods movements careful controlled. 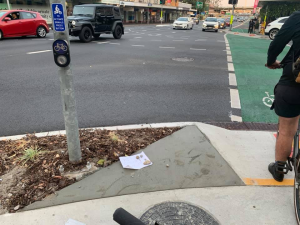 In better news, people heading east on the Woolloongabba Bikeway on Wednesday evening were happy to discover they no longer have to ride through the garden bed to reach the beg-button. Yay.

More good news: thanks to Roadie Rob’s Bicycle School for alerting us to a new pump track almost ready for use in D.M. Henderson Park, MacGregor. (It replaces an old dirt track on the same site, behind the playground) Tracks like this are a great way for kids (and big kids) to have some active fun and learn skills and confidence on the bike. This one is next to the Bulimba Creek Bikeway, so it’s really accessible for local families.

But back to the beginning for a moment: we started this week by warning people that they could expect traffic disruption in Brisbane during Rebellion Week. But contrary to the narrative promoted in main-stream media, that disruption would be caused by too many people driving cars. People who walk, cycle, or catch a train or ferry could expect to get around as usual. (Unfortunately we noted it was likely that some bus routes might be held up – again, by people driving cars). 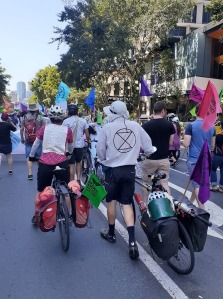 There’s just no way to move the million-plus inhabitants of Brisbane if they are all surrounded by a room-sized metal box which they need to store at their destination. And as we’ve seen, cars are not just inefficient in terms of space; they present a significant health-hazard to people in them and around them.

We’ve spent 4 years writing letters, postcards, and petitions, holding information stalls and polite conversations trying to convince Brisbane City Council to change “business as usual” which sees them spending $1 billion every year on road projects and only sometimes squeezing in improvements for people walking and cycling as an afterthought (while laughably calling that ‘balance’). That’s why we have so much sympathy with the message of Extinction Rebellion: we need to act immediately and decisively to ensure a liveable city and a liveable planet for ourselves and our children.

Cities have an incredibly important role to play in our race to decarbonise and stave off the worst effects of climate change. The good news is that in the process, we can improve our way of life! Some of the most significant net emissions reductions in recent years have been achieved in London, Berlin, and Madrid – all of which have focused on building cycling networks and reducing motor vehicle traffic.

On Wednesday, Premier Annastacia Palaszczuk MP announced plans to fast-track new laws to ban “dangerous devices”, saying “This is specifically aimed at the use of dangerous devices, that are dangerous not only to the people that are using them, but to our emergency services personnel that actually have to free them and injure themselves doing so.” 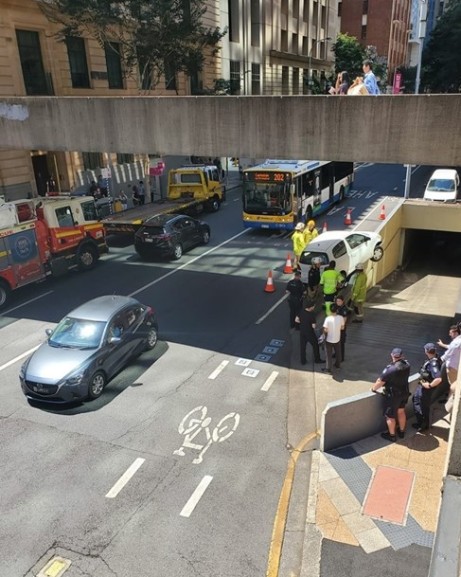 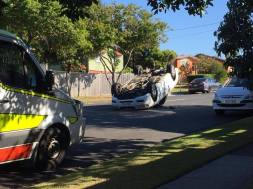 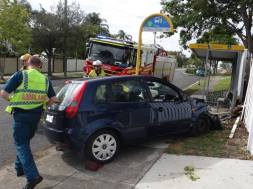 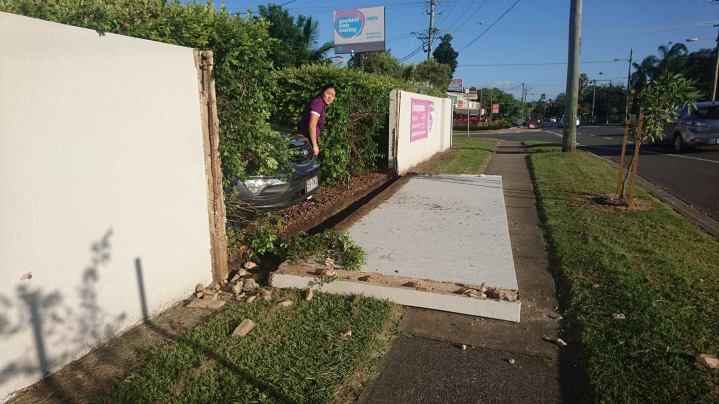 We were disappointed to learn that she wasn’t talking about the type of dangerous devices which in the wrong hands kill around 250 Queenslanders every year, and hospitalise more than 6,000 others. Misuse of these devices places a huge burden on our police and emergency services and costs state and local governments billions of dollars. They cause major traffic disruption each and every morning and afternoon in Brisbane, and inconvenience thousands of law-abiding folk who need to cross roads to get to work and get home to their families. We need tougher regulations on where and how these dangerous devices can be used, and higher penalties for people misusing them. Perhaps police should be given powers to stop and detain anyone using them for non-essential purposes, or confiscate any devices they suspect might be used for illegal activity – such as turning without giving way to pedestrians?

Unfortunately this clip from the ABC series Utopia is not simply satire. Millions (billions) of dollars poured into widening urban roads and intersections actually increases traffic.

But, at least road projects around Brisbane that widen state government roads require active transport infrastructure to be included these days. On the weekend, we were excited to discover that the new shared path along Beaudesert Rd / Mount Lindsay Highway which was built as part of the Logan Enhancement Project is now finally open. This provides a safe link between Illaweena St and Trinity Way, Drewvale. If you were familiar with the area in the past, you’ll know that was a very sketchy ride!

One improvement we would suggest is that where the path crosses the motorway off-ramp, path users should automatically see a green light each time the traffic is stopped. I.e. the crossing light should be green for pedestrians and cyclists whenever the traffic travelling south on Mount Lindsay Hwy has green.

In Christchurch, NZ, where they have rolled out new separated cycleways, ridership has jumped as much as 45%. The only thing that should be controversial about protected cycleways is: why aren’t we building more of them, and faster?

The City of Melbourne this week released their Melbourne Transport Strategy 2030, with ambitious plans to improve safety, reduce congestion, cut emissions, and declutter the CBD, making it a more pleasant place to socialise and do business. The council’s priorities over the next four years include adding protected bike lanes along Exhibition Street, Latrobe Street and Rathdowne Street. (Hey Brisbane, we have an idea: protected bike lanes on George St, Ann St, Edward St, Margaret St and Herschel St!)

Meanwhile in Sydney: “Lack of access to safe cycling paths is a barrier for the 70 per cent of customers who tell us they would like to cycle more for short trips and would do so if they felt safer and more confident” according to the NSW government. But attempts to build more protected bikelanes have been opposed by people who “seem to have forgotten that roads are public spaces, not the exclusive right of cars.” The City of Sydney has a plan, and is making progress under the strong leadership of Lord Mayor Clover Moore. Currently Brisbane seems lacking the plan and the leadership, but we are determined to help change that.

Like Americans, huge numbers of Australians would like to ride a bike for transport but don’t because it simply doesn’t feel safe. Yet making it safe for people to travel in a healthy, efficient, non-polluting way is still seen as controversial. Bike Snob highlights the absurdity:

Studies continue to show that bike lanes are good for business. Bike share keeps growing; in New York City alone, Citi Bike is now doing over 100,000 rides a day. And e-bikes are making cycling more accessible and attractive than ever. Basically, bike lanes are about as “controversial” as vaccines: sure, there are people out there who are against them, but it’s a relatively small number because it requires expert-level mental gymnastics to convince yourself that they don’t work.

Come on Brisbane, let’s get with it! Let’s prioritise safe, protected, connected bikeways across the city.

Londoners have shown what persistent community campaigning can achieve: new, protected cycleways! (Not just a lot of hot air about a $100million bikeways program which has delivered barely 5km of new paths.) East London is getting a new segregated cycleway which make things better for everyone – pedestrians, local residents, and public transport users included. If you’d like to see something similar in east Brisbane, please sign our petition for a separated cycleway on Stanley St East.

Finally, a bit of fun: we saw a great piece of activism from the US, where someone took control of an illuminated street sign to spread an important message: