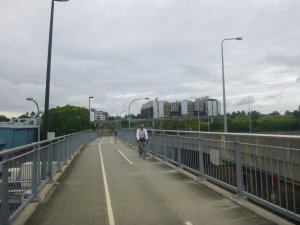 The latest revision of the plans for Cross River Rail were released this week, and we were delighted to discover that one of the changes will include: “a new elevated surface pedestrian and cycle link (bridge) from the PA Hospital to the Boggo Road Urban Village. The bridge spans from Joe Baker Street over the existing rail providing a 5.4m clearance and connects with the existing cycleway adjacent to the Boggo Road Busway.”

This is something we campaigned for at public consultations, written submissions, via a parliamentary petition, and in individual discussions with senior members of government – including Minister Mark Bailey MP – Labor for Miller, Deputy Premier Jackie Trad, and Member for Greenslopes, Joe Kelly MP. We thank them and the project team for this great outcome!

A further positive: the revised project will also upgrade the existing surface station at Dutton Park, which will include “a new covered pedestrian bridge south of Annerley Road Bridge. This will improve disability access by providing an integrated pathway for independent access to the upgraded station from catchments via Cornwall Street and Annerley Road and the PA Hospital via stairs and lifts.”

We will endeavour to provide updates when we’ve had an opportunity to look through the details.

On Tuesday, we discovered that Council’s Public and Active Transport Committee has a new Chairperson… Councillor Krista Adams, who is Deputy Mayor and Councillor for Holland Park. We also discovered that the portfolio has been expanded to also include Economic Development. We’re a bit bemused by that, but happy to have Cr Adams in the role. We hope she stays in the seat for a little longer than her predecessor.

The committee presentation this week was on the Guyatt Park ferry terminal upgrade which is about to begin. There will be bike parking for 15 bikes – which we hope will be the simple elegant hoops, rather than the annoying coat-hanger racks which are hard to use if you have a basket or panniers.

Also on Tuesday, Council held a media event for the “opening” of the Woolloongabba Bikeway… although it’s still not yet fully open…  Whatever. We do like the sections which have been completed and opened! 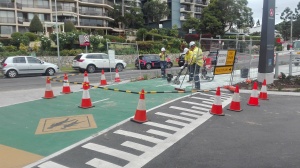 We were less excited to find workers were busy removing the paint from the existing section of the Kangaroo Point Bikeway. But at least the bikeway is helping to create jobs! The Kangaroo Point Bikeway has created jobs building it, planting trees, replacing those trees, painting it, removing the paint, and (presumably) repainting it. Jobs and growth!!! 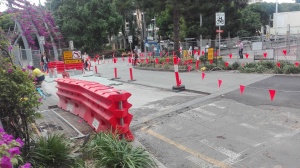 We also expressed out impatience that the paving at the end of the Goodwill Bridge is taking so long… and wondered why the decision was made to use pavers instead of asphalt. (Or whether the pavers will be slippery when wet….) We’re as frustrated as everyone else about this – particularly since we don’t believe there are any plans to shift the garden beds to help fix the pedestrian cross-over confusion and reduce the risk of a slip or head-on collision between turning cyclists.

The good news about the Kangaroo Point Bikeway is that Stage 1A subsection ii (between Little Dock St and the Maritime Museum driveway) looks like it will be great when we finally get to ride on it. However we don’t like the lip on the entrance from Dock St; Brisbane CBD BUG have alerted Council that it is dangerous. This is the entry we would expect people to use if they are cycling from the hospital precinct or West End via Vulture St and heading to Kangaroo Point peninsula or the Veloway. There is no excuse for these dangerous profiles anywhere, but particularly in a busy location like this. 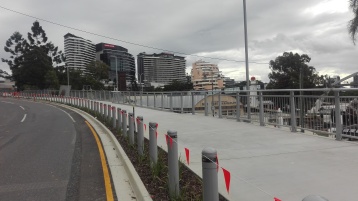 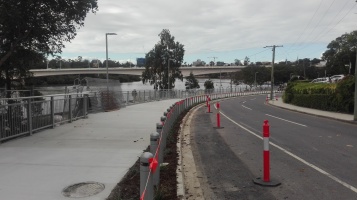 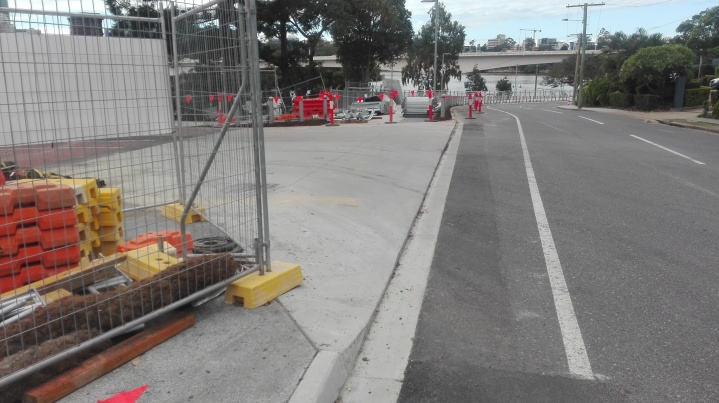 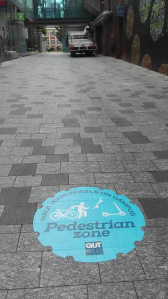 Also in the CBD, we noticed that QUT has decided to more actively enforce the prohibition on cycling at their Gardens Point Campus. This is their prerogative, and technically you were never supposed to ride a bike on campus, but security tended to turn a blind eye on Main Drive as long as you were slow and considerate. Unfortunately, this effectively means that cycle access from the Goodwill Bridge to George St is now closed. The only options left to connect from the Veloway or Woolloongabba Bikeway into the city centre now involve picking your way along the footpath on Ann St, riding through the Botanical Gardens to the Albert St gates, or taking the ramp behind 1 William St and the footpath from there.

In the south: we learned that the pedestrian/cycle bridge over the Logan Motorway slip lanes is in place, and set to open mid year. The new path along Beaudesert Rd and Mt Lindsay Hwy will connect from Illaweena Rd, Calamvale to Acacia St, Drewvale, and will enable people in Drewvale, Calamvale, Parkinson and Browns Plains to access shops and businesses by cycling or walking that previously required a car trip. It will also make cycling to school an option for students who previously couldn’t. It’s a little frustrating that links like this only seem to happen when there’s a major road widening, and never go as far as they could to create a connected bike network – but we need to keep informed and engaged to achieve the best possible outcomes when projects like this come up.

In a new report from the US, transportation experts have called for safer intersection treatments to protect people walking and cycling – as well as people driving.

How many times have we said this: intersections are key to making bike networks that are safe and inviting or people of all ages, backgrounds, and abilities. There are proven ways to do this, using traffic signal timing, pedestrian islands, speed bumps, corner curbs, and setbacks between vehicle and bike lanes that discourage cars from making high-speed turns. These designs work! A protected intersection design in San Francisco led to 98 percent of drivers yielding to cyclists and drivers yielding to pedestrians 100 percent of the time. It’s that simple to create a city which is safe and attractive for people to walk, bike and scoot. And that’s a city which is better for everyone.

Finally, check out this amazing video from blogger Bicycle Dutch showing just how efficiently and quietly ‘traffic’ can move when you stop prioritising cars!