This week Belinda and Mitch headed to Melbourne for the Australian Bicycle Summit, which was great learning and networking experience. We’ve posted about it here.

That left it up to Stephen to go along to Council’s Public and Active Transport Committee on Tuesday for an update. We’re struggling to keep up with the reshuffles on Council’s committees. After only chairing the committee for one meeting, Cr Ryan Murphy is now switching wards from Doboy to Chandler (the position vacated by Lord Mayor Adrian Schrinner), and has announced he will step aside from his role in civic cabinet. So this week’s meeting was chaired by Cr David McLachlan instead. The presentation was a general overview of the public and active transport portfolio within Council.

In response to a question, there was an update on Council’s banana bar replacement program: BCC are on target to remove 50 sets this year, with a priority on those areas cyclists report as unsafe. We are pleased this is happening, but wish they had started earlier and were not now having to remove infrastructure we begged them not to install in the first place!

From Brisbane to Melbourne to Adelaide, Belinda took the opportunity to catch up with a friendly bunch of bike advocates at the Bicycle Institute of South Australia AGM. (These meetings are worth attending, they have some very nice local wine!). It was great to meet people from Westside BUG, Adelaide BUG, Prospect BUG, Campbelltown BUG, Marion BUG, Unley BUG, West Torrens BUG, and Norwood Payneham & St Peters BUG, as well as local councillors from City of Adelaide, City of Norwood Payneham and St Peters, and City of West Torrens. We also heard an interesting talk from the state government about their project to scope and understand the size, strengths, and opportunities for the Bicycle Economy in South Australia.

Later, while cycling through Adelaide’s beachside suburb of Glenelg, Belinda came across a driverless bus which is being trialled on the bikeway, pushing people on bikes off onto the grass, and blocking anyone wanting to travel faster than walking speed. If this is the future of autonomous vehicles, we’re not keen! On the upside, the path seems to have been upgraded to be wide and smooth to accommodate the bus. Perhaps this is the way to finally get high quality bikeways… once the motor vehicles are off them.

Finally, almost four years after Brisbane CBD BUG petitioned for urgent action to light the Grammar Path (the cycle route out of the CBD to the northern suburbs), we were advised that work will begin on 20 May, to be finished by July 2019. There are also improvements scheduled for the dangerous corners on the northern side of the land bridge.

At Brisbane Airport, we were very happy to see that construction has finally begun on the bikeway along Lomandra Drive from Viola Place to Da Vinci Boulevard. This is good news for people who work at businesses or attend Aviation Australia College in the Da Vinci precinct. Airport BUG have been lobbying for this connection for a decade, and it will be a huge relief to finally have an option to avoid busy Lomandra Drive.

In East Brisbane, we were pleased to have our earlier skepticism disproved, noting that at the intersection of Lytton Rd and Kulpurum St, the lights have been set so that people cycling and walking have the same priority as drivers continuing straight ahead. Turning traffic must wait for the lights to change after a vehicle triggers the turning sequence. We say well done to Council on this one! This is exactly how it should work at other intersections, such as at Land St in Auchenflower, and at the entrance the Shaw Park sports grounds. 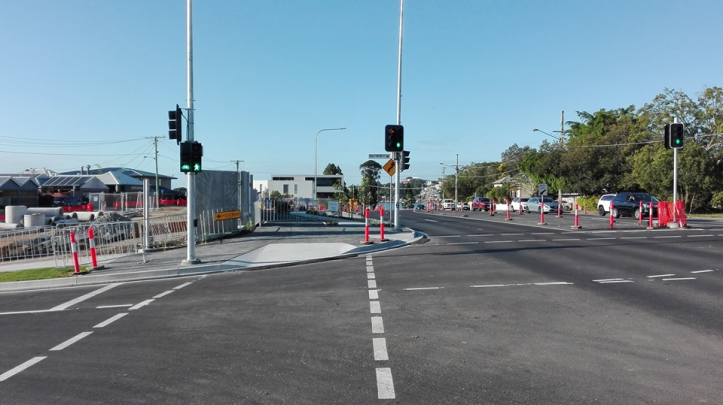 The Big Bike Film Night is coming to the Schonell Cinema on Thursday 29 August 2019. This was a great night last year, with some very entertaining and thought provoking short films. The event sold out last year so make sure you get your tickets early to avoid disappointment.