A busy couple of weeks around Brisbane

On 6 February, Council returned after the summer recess, and we went along for an update. We were happy to welcome new Morningside Ward Councillor Kara Cook to the Public and Active Transport Committee, where she is joined by Cr Fiona King (Marchant Ward) who takes up the position of deputy chair of that committee this year. It’s great to have two new members who have been very open to discussing better active transport options.

This week we finally learned details about the Botanic Gardens Riverwalk Project (which Team Quirk referred to as the Alice St / Edward St Bridge during the 2016 election campaign). The $17 million project will connect the boardwalk at Eagle St Pier to Bunya Walk in the City Botanic Gardens. Representatives from CBD BUG and EaST BUG attended a briefing by the project team, and we also learned more details in the Public and Active Transport Committee Meeting on 13 February.

We had a chance to hear from Council’s Strategic Planning Manager, Lindsay Enright about the draft Transport Plan for Brisbane. The plan is intended to guide how Brisbane’s transport network will grow and adapt for the next 25 years and beyond. It’s encouraging to see recognition that the current high level of reliance on private motor vehicles is unsustainable, as the total number of commuter trips in Brisbane is expected to more than double from 2016 to 2041. Feedback on the draft plan is open until 30 March, via face-to-face sessions, a quick online survey, and an ideas register where you can add ideas of your own and vote on those submitted by others. (Hint: jump on and upvote those calling for improved active transport!) 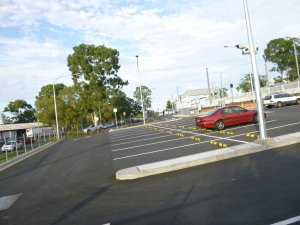 Speaking of transport plans, we asked the question: is creating more car storage around major stations the best approach to encouraging more people to use public transport? EaST BUG pointed out that the new park and ride facility at Murarrie cost $60,000 per car space to build ̶ without even accounting for the value of the land ̶ is an expensive subsidy for each additional person enticed onto the train or bus. We’ve highlighted that the same amount spent on better footpaths, safer crossings, lighting, and protected bikelanes could benefit more people, and not just during the week-day rush-hour.

Also in the east, we finally received what we hope is good news for the the Norman Creek Bikeway: community consultation is set to begin on an upgrade to Hanlon Park at Stones Corner as the next stage of the Norman Creek 2012 – 2031 Master Plan. Everyone is hoping the project will finally be the catalyst to connect the Norman Creek Bikeway under the bridge on Logan Road, bypassing two dangerous and awkward crossings and finally giving the families at Buranda State School and Narbethong State Special School a safer route to school. Council’s website has a link to an online survey (open from 5-25 February) and information on how to register for a co-design workshop to be held in early March.

Countering that potential good news, Council confirmed they will not do any improvements to eastern cycle corridor (Lytton / Wynnum Road) which are not part of a road widening project. For the foreseeable future that means people wanting to commute by bike from rapidly growing eastern suburbs like Morningside and Cannon Hill must either brave Wynnum Road itself or bump their way along a broken and obstructed footpath through a series of poor intersections.

The Goodwill Bridge was back in the news this week, with more reports of slips and falls in rainy conditions, despite the latest signage advising riders to dismount when wet. Belinda spoke with Katherine Feeney on ABC Brisbane Radio on Thursday.

On Friday, we received some excellent news regarding the cycle facilities that will be included in the Ipswich Motorway Upgrade: Rocklea to Darra – Stage 1. We had lobbied hard for this project to include cycleways, and are excited to see that the final design includes cycle access (via shared paths) along both the north and south sides of Ipswich Motorway on the new bridges over Oxley Creek; a connecting underpass; plus a new 2-way cycleway along the northern side of the motorway between Oxley Creek and Granard Road. The project will also provide a connection from this new cycleway, under the motorway to Granard Road – which has been a sorely missing connection.

In other happenings: Bicycle Queensland released a public statement supporting calls for presumed liability laws in Queensland, which we thoroughly endorse; Quest Community Newspapers’ City South News ran a positive front-page story about staff at the Princess Alexandra Hospital taking up the option to take a bike instead of a service car when visiting rehab patients living in supported accommodation in surrounding suburbs; and in the South Brisbane electorate, Jackie Trad MP is running a community survey ahead of a Transport and Mobility Study.

Finally, entries have closed for the Brisbane Bike Bites short film competition, and we have some great local films. Don’t miss out on your tickets to the Brisbane Bicycle Film Festival to watch the finalists on the big screen and vote for your favourite in the people’s choice award.

On Monday 19 February, we will be hosting Darren Davis, Auckland Council’s Transport & Land Use Integration Programme Manager, presenting on Auckland’s cycling journey. Just four years ago, Auckland didn’t have a single on-street protected cycleway, but now our sister city is most of the way through a four-year programme to deliver 52 km of largely protected cycleways, centred around a minimum grid in the city centre. We’re excited to hear from Darren about Auckland’s amazing journey.

For the north-siders, the next “Lord Mayor and Civic Cabinet Listens” forum will be held on Thursday 22 February in Michelton.

Analysis and opinion from around Australia…

Victorian transport blogger Daniel Bowen published an excellent opinion piece, pointing out that a fundamental problems with transport planning in Australia is that politicians see it as demand-led, when basically transport systems are supply-led. Demand-led thinking has them looking at congested roads and thinking “we need to build another one”. It really is simple: If you want people to walk, cycle, or catch public transport, then provide that instead.

Meanwhile an article in The Conversation painted a bleak picture of the state of active transport in Australia’s car-centric cities, with Brisbane faring worst of all, having less walking, lower (and declining) public transport use and much more driving than Sydney, Melbourne or Perth. Once again, the author highlighted the obvious solution: Active travel must become normalised as an integral part of transport planning. Footpaths, crosswalks and bicycle lanes must be standard elements of street templates and guidelines, just like telephone lines and fire hydrants.

.. and around the world

Figures from the Canadian city of Calgary show the instant effect of a city-centre grid of safe bike lanes. The Canadian city spent about $6 million to build a network of bike lanes in its downtown, using cheap infrastructure like planters to separate the people on bicycles from motor vehicles, which made tinkering with the design to fix any problems as easy as powering up a forklift.

One of our favourite bloggers from London provided some insight on congestion: Motor traffic seems big and important with all the noise, the size of the vehicles, the (occasional) speed – it seems like it’s conveying lots of people, and fast. But in reality, it’s an extremely inefficient way of moving people around urban areas.

This great video about parking and car ownership in Japan shows how they avoid the parking woes we keep hearing about in Brisbane, and manage to make cities like Tokyo quite bicycle-friendly even without a lot of specific cycling infrastructure

Council hinted we might be closer to protected bikeways in the CBD. Maybe. But as Melbourne and Sydney get serious about cycling through the coronavirus recovery, Brisbane urgently needs a plan, so we’ve proposed high-value, low-friction links to tackle inner city congestion. We discuss cycle commuting (in any weather) to work and school, and how seniors benefit too.

This week: a win for advocacy as the Jim Soorley Bikeway stays open. Council says no to urgent #SpaceForHealth but Brisbane people are still keen to ride. The Courier Mail gets nasty, but there’s better coverage in other media. We update on green bridges, the Veloway, and news from the suburbs.

Council is back in session, but we’re disappointed and increasingly alarmed at Brisbane’s non-response to COVID-19 as business and schools start to come back. We have some good news stories though. Around the suburbs we visit Bellbowrie, Tarragindi, Norman Park, Coorparoo, Wakerley and Dutton Park, and update on the Jim Soorley Bikeway, North Brisbane Bikeway, and V1 Veloway.

Bikeways around Brisbane are still busy, and the national campaign for #SpaceForHealth is gathering momentum. Around the world it almost feels as though the tyranny of cars might be coming to an end, but will Brisbane be left behind stuck in traffic? In local news we revisit Dutton Park and the Jim Soorley Bikeway, and report some long-awaited good news from Norman Park.

This week we helped launch a national campaign for #SpaceForHealth and #HealthyStreets during and after the COVID-19 crisis. Brisbane City Council returned; we reported on local news from Dutton Park and East Brisbane, and the plans for a new ferry terminal at Howard Smith Wharves.