It has been an icon of Brisbane cycleways for a generation. But it seems the monster bollard protecting the Jack Pesch Bridge won’t outlive the more prolific but equally annoying banana bars. They are still hanging on tenaciously around the suburbs. This week we said farewell to the yellow pillar of 2-wheeled society; it will not be much missed.

We finally had some delicious rain, but it created a few challenges for the trip home on Friday. Be careful of the mud and debris on the paths after heavy rain in Brisbane. 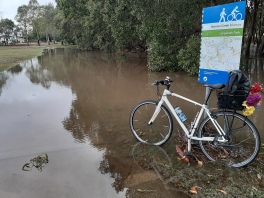 On a happy note, Brisbane City Council recently completed work on the Riverside Drive bikeway between Hill End Terrace and Kurilpa Street, West End. Brisbane West BUG takes us on a ride to check it out. Nice!

But where are the women? 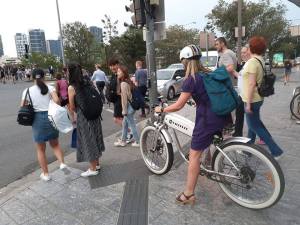 An article this week asks: Women love bikes—so why don’t they cycle to work? With a few exceptions, in countries and cities around the world, the two-wheel commute is largely dominated by men. Survey after survey finds that one concern trumps all others: safety.  Women are more likely than men to say they want safer cycling. It’s not just what people say either; recent data from New York demonstrates that making streets safer increases women’s use of them dramatically. If we want a safer, healthier, more equitable city, it’s time to make protected cycleways and calm neighbourhood streets a top priority.

“Research has shown safer routes reach gender balance in riders, with women more likely to opt for them to avoid hairy, close shaves with cars. Where there aren’t options that feel safe, women are more likely to leave their bike in the garage. I would love for all women – pregnant or not – to comfortably ride to the station, the shops and other short trips.” That quote was from a great article in the Brisbane Times this week on cycling while pregnant. Or, as we like to think of it, cycling while human.

The state of the world

Sydney shows what can be done with a protected cycletrack on a fairly typical inner suburban street – in the latest case, Wilson St, Newtown. The excuse that Brisbane’s streets are “too narrow” sounds a bit silly in this context:

Meanwhile, the mayor of Montreal says people’s lives are more important than making motor vehicles go faster. Even better, her administration is acting on this by redesigning intersections across the city to make them safer for people walking and cycling. Montreal, despite harsh winters, is rated one of North America’s top cycling cities, even before the mayor’s new approach has been rolled out. Imagine what a city like Brisbane could do with the same attitude!

The State of Washington is working with employers to reduce the number of people driving alone to work. Their number one message: charge market rates for parking. That money can then be used to support employees choosing other modes: provide transit passes, locker rooms, bike storage facilities and even direct financial rewards. Employers like the Gates Foundation have identified that it’s important to apply a daily parking charge, rather than a monthly fee. That way people can still drive when they need to but don’t feel like they need to get value from their monthly parking pass. Each day there is a financial incentive not to drive.

You still have plenty of time to get your ideas on to film for the Brisbane Bike Bites Short Film Competition. Entries close on 7th February 2020. We have a lot of talented bike riding film makers in Brisbane and the entries are always entertaining. Information on how to enter is on our web site.

This is one of our favourite short bike films!

This week we rode to remember Carolyn Lister; a life well lived and a friend well loved. The first meeting of the Active Transport Advisory Committee was positive, but no miracles happened. No cycleways have popped up in Brisbane yet. Around the suburbs we visited Salisbury, Rocklea, Oxley, and Coorparoo.