Our major activity this week was organising The Big Push for Road Safety. It was a blast! Pictures and report coming very soon!

We’re fighting for more of what we see happening on the newly opened Woolloongabba Bikeway; people of all ages and abilities feeling safe and comfortable travelling by bike!

It’s clear from looking at the number of bikes around that Brisbane is bursting to be a cycling city. We just need to make it easier for everyone to enjoy the opportunity of being outside and active on the 365 days per year we have perfect weather for cycling!

On Sunday at the awesome Kurilpa Derby, the kids were impatient to take over the street. Brisbane needs #SundayStreets every weekend!

So, what is Council doing about it?

On Tuesday, Council’s committee previously responsible for public and active transport didn’t have any of that on their agenda this morning, so Belinda went along to the Infrastructure Committee meeting instead. There the main topic was council’s Move Safe Program outcome #1 – speed limit reductions in key precincts.

From next month, the speed limits will be reduced
* from 50 to 40 on Flinders Pde, Sandgate (between Second Av and Ninth Av)
* from 50 to 40 on Station Rd, Indooroopilly (Conan St to Musgrave Rd)
* from 60 to 50 along Beaudesert Rd, Moorooka
* from 60 to 50 along the full length of Riding Rd, Hawthorne (not just the middle section reported some time ago)

There was some comment about speed limits that “drivers will find credible” which seemed to suggest that current driver behaviour must be pandered to 🙄 There was also discussion on a communications campaign to address pedestrian safety at Sunnybank, particularly along Mains Rd and McCullough St and at that intersection, where hopefully the slip lanes will be reviewed.

An interesting item to report from Tuesdays’ main Council meeting: the vote on whether to accept the recommendation of the Public and Active Transport and Economic and Tourism Development Committee to reject Brisbane CBD BUG’s petition about Melbourne St has been delayed. In this petition we called on Council to provide separated cycling facilities in the CBD and South Brisbane as part of the Brisbane Metro project, rather than just a shared path on North Quay, and on-road lanes on short sections of Adelaide St and Melbourne St, as is currently proposed.

CBD BUG co-convenor, Donald Campbell has applied to address Council on this matter to highlight that mixing cyclists with bus traffic in the busy area along Melbourne St wouldn’t be safe or comfortable. Drivers from the RBTU have thrown their support behind our calls for separated space for cycling; mixing people on bikes with buses on a busy route like this is unnecessarily stressful for everyone.

We hope that the time between now and 22 October (when Donald speaks) can be used to properly investigate a design solution like the one we have proposed, which would give everyone separated space, allowing bus traffic to proceed without interruption, and keeping people on bikes and scooters off the footpaths.

Petitions are a useful part of our campaign for safer streets, as they can really help draw attention to an issue, and let decision-makers know how much support there is in the community for better bikeways.

People who cycle (or would like to) from the eastern suburbs will be painfully aware that there is no arterial cycling route connecting the Brisbane CBD to the eastern suburbs of a similar standard to the Bicentennial/Centenary Bikeway corridor to the south-west, V1 Veloway to the south, and North Brisbane Bikeway under construction to the northern suburbs. East BUG Inc. have started a petition asking Council to extend the Woolloongabba Bikeway east through East Brisbane, with a 2-way protected cycleway constructed along Stanley St East at least as far as the Cleveland Rail Corridor at Coorparoo.

Stanley St East has been consistently identified as one of the most congested road corridors in Brisbane, but residents do not have a safe option to avoid that congestion by taking the healthier and faster alternative of cycling. Constructing a 2-way protected bikeway along Stanley St East to allow for safe and convenient cycling offers an efficient way to re-purpose space currently reserved for parking a limited number of cars. The business benefits of replacing on-street parking spaces with a bikeway are well proven. An added benefit of removing on-street parking and providing protected and separated space for cycling is that it will allow more efficient movement of buses along this important route. Please add your signature to help us get this on Council’s agenda.

While you’re there, please also add your name to David’s petition for clearer markings along the older section of the Kangaroo Point Bikeway, which is currently confusing for everyone.

Mitch doesn’t usually wear lycra when he rides a bike, but he dropped in to ‘Lattes in Lycra’ with the bike police at the Regatta Hotel on Saturday morning to talk about cyclist safety for Road Safety Week. The Police are offering free coffee and a heap of Road Safety promotional stuff – keyrings touches, towels, stickers etc. They also discussed bike theft, and Mitch was told there were over $150,000 worth of bikes stolen in the Indooroopilly Police District this year to July and this is a big concern for the police. They now have a new database where they can record your bike serial number along with a photo of your bike in the event that it is stolen. The police said they also have difficulty returning bikes they recover because they can’t find the owners; this system will help. What a great initiative by Queensland Police Service! 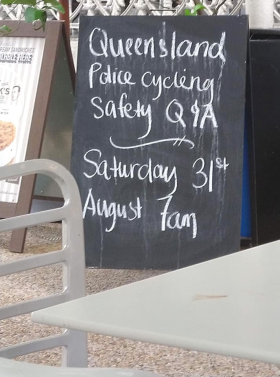 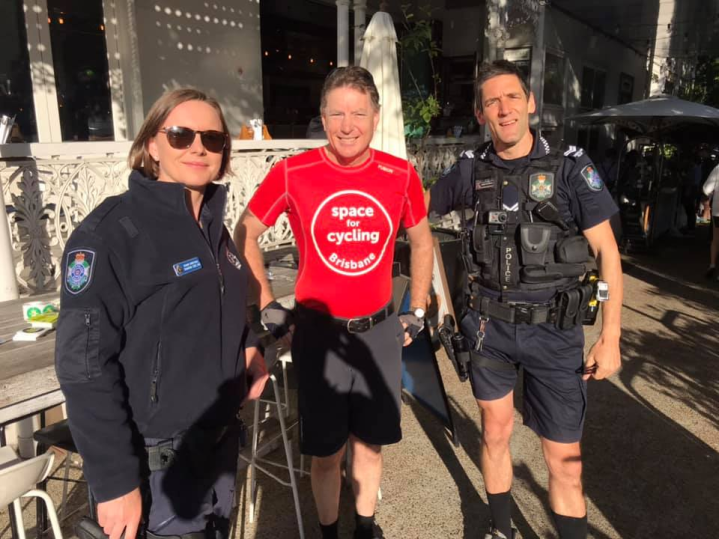 What other cities are up to 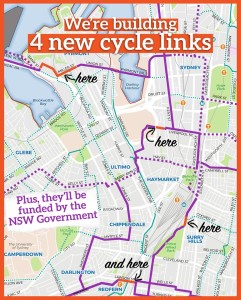 In Sydney, city leaders like Mayor Clover Moore seem to understand that a functional cycle network needs to be connected. You can’t encourage more people to travel by bike if they have to take on dangerous and hostile connections to reach good bikeways. It’s embarrassing that central Sydney is leading us on ride-ability and pulling further ahead. All the excuses which have been made in Brisbane (our streets are narrow, it’s hilly, we live in a big populous city, we have occassional bad weather, etc, etc) actually apply in Sydney. Yet they can still build protected cycleways! 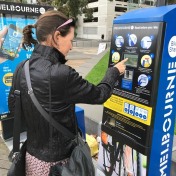 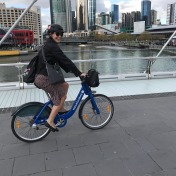 We were sorry to hear that Melbourne’s public bike hire scheme will be discontinued. Bikes are a useful part of the transport mix, and very cheap component compared to other modes – most notably driving and parking private motor vehicles, which are heavily subsidised. We’re lucky to have CityCycle in Brisbane, and pleased that use of the handy bikes is continuing to grow. Congratulations to Brisbane City Council and Lord Mayor Adrian Schrinner for staying the course with sensible policy. (There are things that could be done to further improve CityCycle, including extending the network into areas like East Brisbane, Stones Corner, Spring Hill, and out along the Kingsford Smith Drive corridor. And of course building a grid of protected bike lanes in the CBD and the Valley so riding is more convenient and safer! But we still think CityCycle is paying dividends for quality of life in Brisbane.)

Meanwhile, across the Ditch, our sister city is showing us up again. Auckland now has a (draft) design guide for safe streets and protected intersections. This is what we so badly need in Brisbane to turn our “principal cycle network” into a reality. Every road infrastructure project and major new development that doesn’t adhere to these principals is a lost opportunity to make Brisbane a safer, healthier, happier city.

An article which went viral this week defined “car blindness” as the mindset of not seeing that cars themselves are a major, chronic problem. Visionary, pragmatic cities around the world are realising the immense benefits of new mobility options, rather than trying to ‘fix cars’. It’s time for Brisbane to get with it!

Robust, easy to park and never slowed down by traffic jams, the cargo bike has been discovered as an efficient alternative to four-wheel transport not just by parents on the nursery or school run, but also carpenters, plumbers, photographers, even chimney sweeps. “I just find it an incredibly liberating experience to get around a city on a cargo bike.” It works in Berlin. It can work in Brisbane!