12 months ago, we made a submission on proposed changes to the Brisbane City Plan that would amended the Local Government Infrastructure Plan (LGIP) which

“…provides developers with an indication of likely infrastructure required as part of any proposed new developments, to ensure infrastructure keeps up with future growth. It also helps Council manage its extensive capital works program.”

We expressed our dismay that many of the pathway projects previously contained in the LGIP appeared to have left out in the proposed update. The omissions included many desperately needed active transport links which the community have been waiting for for years (in some cases decades). It also appeared to let developers off the hook for providing infrastructure in growing areas where the network is already insufficient. This is important, since a key reason for listing these projects is:

“if a development application is lodged for a property that is affected, Council may impose a condition on the development to ensure the infrastructure is provided to Council.”

Without the certainty of the LGIP listings, developers may not be aware (and will have no reason to care) that their plans—particularly for site access—could make it impossible or prohibitively expensive to deliver vital bikeway connections in future.

In their report on submissions (which is now no longer available on the website at the link supplied by email), Council responded that pathway projects identified in the draft LGIP were selected and prioritised based on a number of criteria, including “completing missing links in the network where there is known demand, to support future growth where land is required, and to support Council’s the Brisbane Active Transport Strategy 2012-2026”. But they made no changes to the draft LGIP based on our feedback. 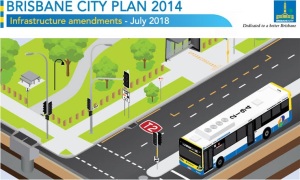 Now the LGIP amendments have been adopted, and the majority of the important projects we highlighted have indeed been removed!! Projects which were listed in the plan for 2016-2021 have quietly been deleted! This is particularly devastating where it includes critical links like a connection between the PA Hospital and the Eleanor Schonnel Bridge, options to avoid some of the most dangerous sections of Lytton Road and Wynnum Road at Morningside, and a cycling corridor to the north-west from the city.

As you can imagine, trying to keep up with all the details of the City Plan, and following up on individual development applications is an impossibly onerous task for a few unpaid volunteers. Having taken the time to contribute in detail, we are appalled to see community input simply ignored.

Now begins the onerous task of following up on the most critical of these projects to ask why they have been removed from the LGIP and Schedule of Works, as well as why some projects have been newly included or brought forward when they might be “nice to have” for a few well-connected locals, but would be difficult to justify in terms of the value they add to the active transport network.

CityLink Cycleway is in the news; it’s great to see people discovering it! Go-slow on the Go Between Bridge and Cultural Centre Riverwalk; updates on Cross River Rail construction at Boggo Road; and our submission to a review of the local laws regulating advertising devices. Don’t let this be an epitaph for Brisbane: “Our city could’ve chosen life, but they chose cars.”

This week: the Victoria Bridge separated cycleway is open! But we’re still waiting at Sumners Rd and the Go Between Bridge. We have updates from Brisbane Airport, the Indooroopilly Riverwalk, and Ipswich Motorway Cycleway. We discuss cycling and the climate crisis, and imagine a fairer Fairfield Road.

Brisbane dried out in time for some fun bike events: Ride With Brisbane and Style Over Speed. Victoria Bridge and William St bikeways look oh so close, but still not open. Likewise the Ipswich Motorway underpass at Oxley Creek. We discuss the Roma Street Proposed Development Scheme, continue the conversation about 30kph streets, and ask: Is driving the new smoking?

Be careful in the wet weather; some people find driving in these conditions confusing, but the kids can still Ride2School. This week: good progress on CityLink, V1 Veloway, and Logan Rd, but not so much on the GoBetween Bridge. We talk about e-mobility and whatever happened to a couple of “shovel-ready” projects. Around the suburbs: Eatons Hill, Wakerley, Lota, and Arana Hills.

This week: how the North Brisbane Bikeway will connect through Eagle Junction, plus an update on the section between Chermside and Aspley. Improved plans for the Boggo Road precinct at Dutton Park; but a poor report card for TMR planners at Kenmore. CityCycle decommissioning is leaving riders stranded. Connections to the Ipswich Motorway Cycleway are coming – slowly.