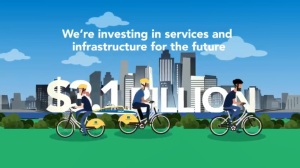 Today, Brisbane City Council announced their 2018-19 budget. On the face of it, the $44 million for bikeways is great news, and we’re very happy to see money for some long-awaited and much needed projects – which we’ll write more about in subsequent posts.  However, the apparent increase in investment is not quite as exciting as it sounds. It is all still within the $100 million 4-year Better Bikeways for Brisbane program that we hear so much about. $10.4 million of the funding for bikeways in this year’s budget is actually just carryover from previous years where the budget for bikeways has been significantly under-spent.

What’s a little strange is some of the projects where money has *not* been carried over – even though the projects have not started.

One example is the curious case of Viola Place (or, as it’s less poetically known, the Moreton Bay Cycleway: Viola Pl to Schneider Rd). The 2016-17 budget included $575,000 for this project, and the 2017-18 budget included $945,000. This year, there is another $694,000 and a note that $870,000 is being carried over. That begs the question: what happened to the $650,000 from earlier budgets that was not carried over? If it wasn’t carried over, presumably it was spent on other projects – but where?? Anyway, it’s good to see $1.5 million in the coming budget to finally build this missing link – but that amount seems excessive for a connection of less than 100m over clear, level ground.

Even more odd is the Land St underpass duplication project, which we were relieved to see cancelled. We’d still very much like to know how much of the $6.9 million allocated in 2016-17 and 2017-18 was spent before the decision was made. Today’s budget includes a carryover amount of $1 million for “River Loop Safety Improvements” which hasn’t appeared as a line item before, but will certainly be welcomed by Brisbane’s cycling community. But surely that’s not all that’s left to roll-over from the $6.9 million for Land St??

Somehow it feels there might be some double-counting going on to reach the $100 million four-year total, but since Council doesn’t report against individual projects, it’s very difficult to pin it down other going through the slow and cumbersome RTI process.

If you’re the type of person who likes spreadsheets, you might like to browse around this link where we’ve been tracking the bikeway budget this term:

Tab 1: What Council refers to as the “Better Bikeways for Brisbane” program has historically included 2 components: “Constructing Key Bikeway Links in Brisbane Suburbs”, and “Enhancing Safety and Cyclist Facilities” – which seems to be a bit of a catch-all including the Cycling Brisbane program, bike parking, centre-line marking, bike counts, bike safe gully grates, etc.

Tab 2: The projects included in the budget under “bikeway reconstruction” aren’t usually counted in the total “Better Bikeways for Brisbane” program, although sometimes the difference between rehabilitating an existing asset and creating a new one seems a bit blurred. Notably this year there is a sizeable chunk of money for the Jim Soorley Bikeway – which will hopefully be put to good use before too much more of the path crumbles into Schulz Canal!

Tab 3: It’s also worth checking out the budget sections on bridges and culverts, as often these are on shared paths. Again the distinction between “bridge and culvert construction – new” and “bridges and culverts reconstruction and rehabilitation” seems quite arbitrary, with complete replacement projects appearing in both lists. This year, the winners are the CBD to Carindale Bikeway at Woolloongabba (Kingfisher Creek bridge), Northgate (with a bizarrely expensive bridge at Elwyn St), the Bulimba Creek Bikeway at Carindale (Meadowbank St bridge replacement) and Wakerley (Kenrick Close).

In addition to these projects, there are bikeways coming as part of a number of road projects – including the Kingsford Smith Drive widening (which will provide a great bikeway between Bretts Wharf and Breakfast Creek) and Lytton Road (including a separated bikeway from Norman Creek to Mowbray Park). Finally, major (and even minor) intersection and road projects can often have an impact on how safe and convenient it is to travel by bike, so we will be closely following Council’s “congestion busting projects” to assess the implications for people wanting to chose healthy transport.

Updates on the Kangaroo Point Green Bridge, CityLink Cycleway, and Metro vehicles—will they take bikes? Cross River Rail impacts the North Brisbane Bikeway (Exhibition Station), Fairfield Road, and the PA Hospital Bikeway. A protected intersection is planned for Beaudesert Road, but not for Monier Road, Darra. Look who’s using the smooth new Veloway! Plus: the power of cargo bikes; EV strategy; and another rail trail to explore in regional Queensland.

This week: the V1 Veloway gains a new section, and planning begins for a new bridge. Much needed improvements at New Farm Park begin, and a chance to meet the team behind the upcoming Kangaroo Point Green Bridge.

This week: Council gives an update on the first two green bridges, and we welcome a new BUG to the community. A small improvement to the bikeway at East Brisbane, but a disappointing response to a petition for improvements further east at Morningside. Paris commits to 30km/h streets and a bicycle film night visits town. Our friend Brenda laments the missing connections at Brisbane Airport, and CityCycle lives on as art.

This week: Cr Hammond joined Andrew for a ride on a new bikeway, while Sam wondered if today’s children will even remember fossil fueled cars. We check out paths in Sunnybank and Runcorn, and a major development application at Buranda. In Morningside, Council voted down improvements to Lytton Rd, but installed more floppy bollards. Also: consultation on Centenary Bridge duplication is open; the Veloway extension looks almost ready to ride; and there are changes coming to the CBD.

This week: facing the Climate Crisis requires decarbonising transport; time to get serious. Small improvements in the CBD, but more is still needed. We’re still impatiently waiting for the North Brisbane Bikeway connection through Bowen Hills, but there’s better news from Aspley, Stafford, Bridgeman Downs, Kenmore, and Clontarf. The bad news is a narrow bridge at Geebung; $1.3million and not fit for purpose.