While in Adelaide for the weekend, Belinda took the opportunity to check out the Marino Rocks Bikeway – particularly the section along the railway line between Clarence Park Station and Emerson Station in Black Forest. This completes a connection between local streets to create a handy quietway from the southwest suburbs into the CBD. The clearance between the outside rail and the bikeway is as little as 1.2m at the closest point, and for much of the rest it is approximately 2m. Only a simple chain wire fence separates the bikeway from the electrified rail line (which does not carry freight – just like the Ferny Hills line in Brisbane). 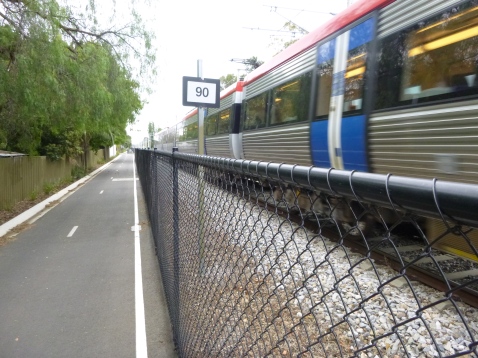 For some reason in Brisbane, there is an insistence on a much greater separation (13m is often mentioned) from the railway line – which is difficult to understand. Railway corridors would seem to offer an ideal opportunity for bikeways where routes are otherwise difficult or hilly, so why are we continually told there is insufficient room? Certainly there may not be enough clearance through a number of underpasses, but railway corridor bikeways could solve some of our worst cycling blackspots, including Morningside to Cannon Hill , Newmarket to Alderley, and south from Dutton Park to Moorooka and Rocklea.

The asphalt pathways and chainwire or spiked fences in Adelaide seem simple, cheap, and effective. We’re left wondering if our problem in Brisbane has nothing to do with clearance at all; but is simply a refusal by one state government agency to play nicely with others?