Brisbane City Council today released the Kangaroo Point Peninsula draft renewal strategy, which will set the direction for the new neighbourhood plan. The top 4 priorities raised by those who provided input to the draft strategy related to active transport, public transport, and creating a local hub – demonstrating a desire for a walkable community.

Given the proximity of the Kangaroo Point Peninsula to the CBD, South Bank, Fortitude Valley, etc it’s absurd that according to the 2011 census, 48% of residents still drive their car to work! We think that reflects the poor quality of the active transport connections (including poor options for walking to the public transport stops). Residents in the area clearly want better alternatives.

It’s a little disappointing that the key actions to address these issues are only listed under Medium term (5-10 Years), including: 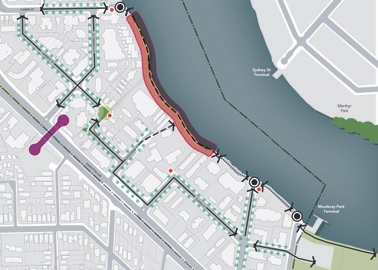 Undertake feasibility studies into the design and construction of the Mowbray Park to Dockside section of RiverWalk.

This was the subject of the first ever e-petition to Council in May 2013  when 112 people petitioned for the money to complete the riverwalk to be included in Councils the 2013-14 budget.

We suggest that Council have had plenty of time already to look into the feasibility of this obvious project, and it would be more appropriate to start work on building it in the “short-term” (1-5 years).

Similarly, action to address the underpass between Deakin St and Thornton St (which is currently not accessible for anyone not able to use stairs) is listed for medium term consideration, when this is already desperately overdue. 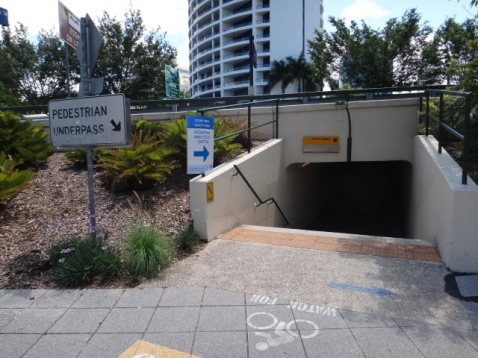 It’s good to see the City Centre Bridge (a pedestrian and cycle bridge linking the city centre to the Kangaroo Point Peninsula in the vicinity of Scott Street and/or Thornton Street) very much back on the agenda, but again, this has been included in plans for Brisbane from the mid 2000s, so it would be nice to think Council would not wait another 5 years before taking any action! 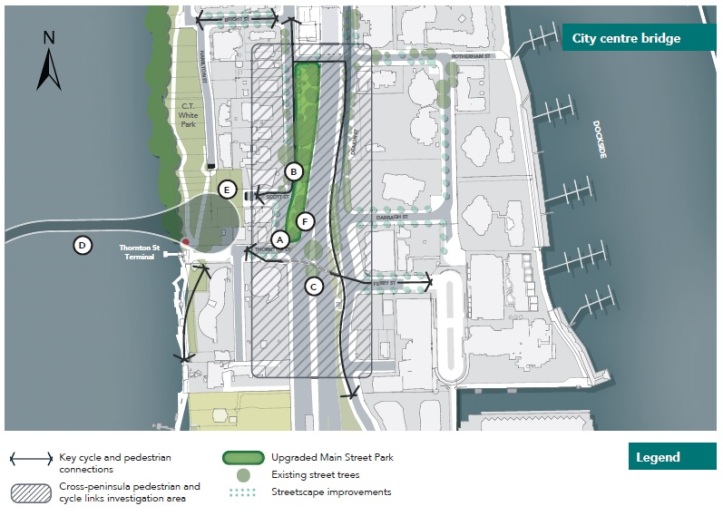 Information about the Kangaroo Point Peninsula neighbourhood plan is available on Council’s website.

Residents (and visitors) are invited to have their say on the draft renewal strategy via the online survey and/or via email to kangaroopointpeninsula@brisbane.qld.gov.au

Information kiosks will be held on:

Updates on the Kangaroo Point Green Bridge, CityLink Cycleway, and Metro vehicles—will they take bikes? Cross River Rail impacts the North Brisbane Bikeway (Exhibition Station), Fairfield Road, and the PA Hospital Bikeway. A protected intersection is planned for Beaudesert Road, but not for Monier Road, Darra. Look who’s using the smooth new Veloway! Plus: the power of cargo bikes; EV strategy; and another rail trail to explore in regional Queensland.

This week: the V1 Veloway gains a new section, and planning begins for a new bridge. Much needed improvements at New Farm Park begin, and a chance to meet the team behind the upcoming Kangaroo Point Green Bridge.

This week: Council gives an update on the first two green bridges, and we welcome a new BUG to the community. A small improvement to the bikeway at East Brisbane, but a disappointing response to a petition for improvements further east at Morningside. Paris commits to 30km/h streets and a bicycle film night visits town. Our friend Brenda laments the missing connections at Brisbane Airport, and CityCycle lives on as art.

This week: Cr Hammond joined Andrew for a ride on a new bikeway, while Sam wondered if today’s children will even remember fossil fueled cars. We check out paths in Sunnybank and Runcorn, and a major development application at Buranda. In Morningside, Council voted down improvements to Lytton Rd, but installed more floppy bollards. Also: consultation on Centenary Bridge duplication is open; the Veloway extension looks almost ready to ride; and there are changes coming to the CBD.

This week: facing the Climate Crisis requires decarbonising transport; time to get serious. Small improvements in the CBD, but more is still needed. We’re still impatiently waiting for the North Brisbane Bikeway connection through Bowen Hills, but there’s better news from Aspley, Stafford, Bridgeman Downs, Kenmore, and Clontarf. The bad news is a narrow bridge at Geebung; $1.3million and not fit for purpose.