On Friday 8th September, with the help of the West End community, we will be installing a Pop up Bike Lane on Hardgrave Road in West End

Photos from the event

The Pop up Bike Lane is being installed to apply political pressure for safe, separated bike lanes through out Brisbane and to raise awareness of how safe it can feel when riding in a protected space. Join us to experience what it could be like if more separated space for people on bikes are installed throughout Brisbane.

The many benefits of protected bike lanes.

Cities in Australia and across the world are installing protected bicycle lanes and realising the benefits in making cities safer, healthier, smarter and more liveable.

Cities which have installed protected bike lanes have found people are attracted to ride bicycles, reducing the number of motor vehicles in the city. http://www.streetsblog.net/2016/02/08/new-evidence-that-protected-bike-lanes-get-people-cycling-more/ .  A report by Transport for NSW showed the separated bike lanes in central Sydney regularly carrying as many people on bikes as in cars on adjacent traffic lanes. http://www.executivestyle.com.au/this-is-why-bike-lanes-are-working-394nq

Protected bike lanes are safer for everyone.

Cities have found protected bike lanes make the street safer for all users. New York Department of Transport studied the streets where they had installed protected bike lanes had a 26 % decrease in injuries. http://greaterplaces.com/project-topic/measuring-the-street-new-metrics-for-21st-century-streets-in-nyc/ . Thereport by Transport for NSW showed an improvement in road safety too, since the protected lanes were installed the number of reported injuries has been halved on the sections of road where separated cycle ways even though the number of cyclists using them has doubled.  http://www.executivestyle.com.au/this-is-why-bike-lanes-are-working-394nq

Protected bikelanes have been shown to improve turnover and increase economic activity for businesses located along the routes. The New York study found up to 49% increase in retail sales on streets where protected bike lanes had been installed. http://www.nyc.gov/html/dot/downloads/pdf/dot-economic-benefits-of-sustainable-streets.pdf

In Australia the report “Good for Busine$$” compiled by the Australian Heart Foundation presents sixteen case studies as evidence to show that improving the environment for walking and cycling generates more business as well as well as he value of nearby properties. https://heartfoundation.org.au/images/uploads/publications/Good-for-business.pdf

Bike lanes are good for health

The Australian Heart Foundation supports protected bike lanes because of the benefits for health from cycling. The latest report of the Chief Health Officer of Queensland: Health of Queenslanders 2014, records that 2.5 million Queenslanders are of excess weight. The report sadly records that Queensland has the highest adult obesity in the nation, 10% greater than the rest of Australia. https://www.health.qld.gov.au/cho_report/ . The report blames obesity on the environment we live in as well as eating too much of the wrong food and moving too little.   The Brisbane City Council can’t do much to influence its citizen’s dietary choices but it can influence how we move by providing transportation choices.

The Chief Health Officer’s report states that “With just over half (56%) of Queenslanders being physically active enough to achieve health benefits, we need to provide built environments, legislation, policies and programs that support people to be active”.  The Brisbane CBD need not be an obesogenic environment and with protected bike lanes the CBD could easily be a healthful environment which encourages people to use active and sustainable transport.

Most cities now recognise that substandard bicycle infrastructure which requires people to ride in the door zone of parked cars or close to heavy motor vehicle traffic won’t increase ridership. A national survey by the Heart Foundation and the Cycling Promotion Fund found 60% of Australians had a bicycle and over half of these people would like to cycle for transport but do not because of unsafe road conditions; speed and or volume of motor traffic and the lack of bicycle lanes. http://heartfoundation.org.au/images/uploads/publications/Cycling-Survey-2011-Riding-a-Bike-for-Transport.pdf  Regardless of the health, environmental and economic benefits of getting around by bicycle, no one will ride it if they think they will be killed doing it. 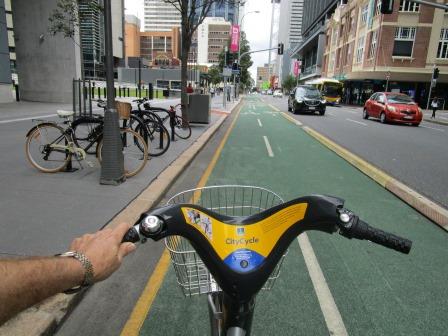 This week as we remembered the Brisbane flood of 2011, we learned that the new flood-proof Indooroopilly Riverwalk is set to open early! Progress on the CityLink Cycleway is a little slower though; perhaps Council could take lessons on popups from Cross River Rail. Maintenance work is about to disrupt active travel on the Go Between and Story Bridges. Don’t forget our petition about Old Cleveland Rd!

Help us petition for cycling infrastructure in all major projects – with no exceptions! This week: the Grammar Path diversion pops up; cyclists are ordered to dismount on Albert St and soon also on the Go Between Bridge. We’re still in the dark about the Bulimba Creek Bikeway lighting promise. Plus, our lockdown listening recommendations.

For the New Year, we check out 10 things we’re looking forward to in 2021, and one we’re definitely not. At this time for resolutions, we reflect on a few simple steps taken by other cities that could help make Brisbane’s streets much safer and friendlier. Together, we can do this!

Christmas greetings! This week Council released plans for the cycleway on Victoria Bridge and William St to connect to the CityLink Cycleway on Elizabeth St. We take a look at the wider, smoother SE Freeway Path at Annerley, and the North Brisbane Bikeway which is oh so close to being ready to ride. The upgraded path on Main St, Kangaroo Point is a bit of a disappointment though, especially when compared to what other cities have achieved this year.

This week: Consultation on the green bridges to West End has been extended, and we attempt to address some of the misconceptions about landing heights. Meanwhile, public engagement on the North West Transport Corridor enters stage 2, but some are left asking: is poor engagement worse than none at all? A petition asks Council to make Lytton Rd safe for all road users, and we look at the changing face of bike advocacy.