Since 2015, there have been various upgrades to the Kedron Brook Bikeway between Grinstead Park and Grange Forest Park. This area is at the border of the suburbs Stafford, Alderley, Enoggera, and Grange. The projects total approximately $3,750,000 which has been spent as follows: 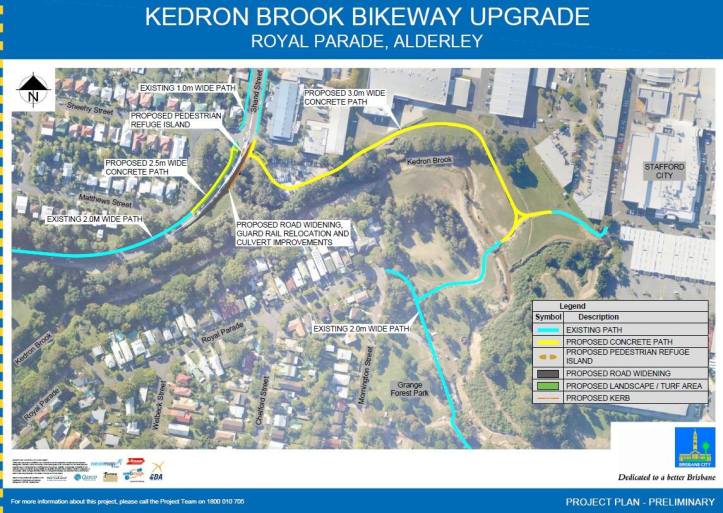 The first stage involved building a connection behind from the Kedron Brook Bikeway behind Stafford City Shopping Centre to Shand Street, Stafford, as well as some improvement to the crossing and paths along Shand St. Confusingly, the path is actually in Stafford and Grange, while Royal Parade is in Alderley, and the budget listing was for Enoggera.

Construction started in March 2015, and the project was completed later that year. The project included installation of lighting along the new pathway, including the section from the bridge over Kedron Brook to the back of Stafford City Shopping Centre.

This stage involved a pathway connecting the carpark in Grinstead Park to the western side of Shand St via an underpass along Kedron Brook, beneath the Shand St bridge. Project information appears to be no longer online, but the drawing is still available via a Google search. The project was completed in 2016.

Commencing in March 2017, this project will connect stage 0 to stage 1, with path along the south eastern side of Shand St and the driveway to Grinstead Park. $1,193,000 has been allocated in the 2016-17 budget for the project – although it is listed there as being in Alderley rather than Stafford.

The story here gets a little confusing, and we have not been able to satisfactorily account for the line item of $618,000 included in Council’s 2016-17 budget for “North Eastern Bikeway Lighting, Stafford.”

In the Lord Mayor’s February 2017 Newsletter for residents in the western suburbs, an article on page 5 “Better bikeway for Stafford” refers to seven new LED lights placed along a 148m section of bikeway between Royal Parade and the Stafford City Shopping Centre. Also in February, in a Facebook Post, Marchant Ward Councillor, Fiona King mentions “more lighting along the bike path between the entrance at Royal Parade and the back of Stafford City Shopping Centre”, but also indicates there may have been new or improved lighting installed in Grange Forest Park.

We know that the section of pathway from the back of Stafford City Shopping Centre to Kedron Brook was lit as part of stage 0 in 2015, and we have photographs to confirm this. So we must assume the short distance from the end of Royal Parade to the bridge at Kedron Brook  benefited from new lighting in 2016-17. But surely that can’t account for $618,000 for 7 lights along 148m of pathway as that would amount to $88,000 PER LIGHT?