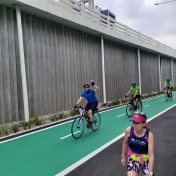 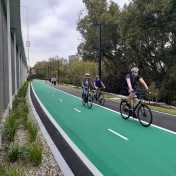 The long awaited bikepath along the river from the Goodwill Bridge to Margaret St (part of the Bicentennial Bikeway) opened on Wednesday morning and it’s looking great. To celebrate, Queens Wharf Brisbane put on a free breakfast at Waterline Park and it proved a popular diversion on the commute to work.

Here are few of our favourite photos from the event, thanks to Queen’s Wharf Brisbane and 97.3FM. Well done to the coffee-makers who did an awesome job keeping up with demand! It was great to see so many people on bikes – including Green’s Lord Mayoral candidate Kath Angus, and Judi Jabour who is running for Labor or Central Ward. 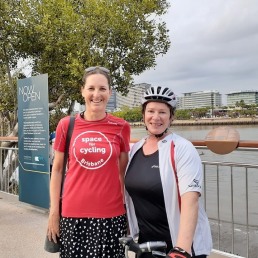 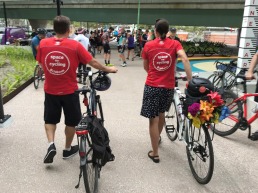 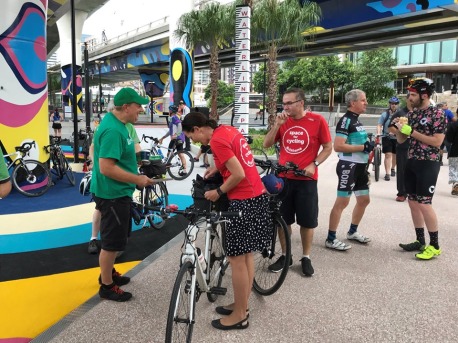 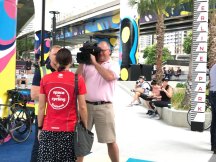 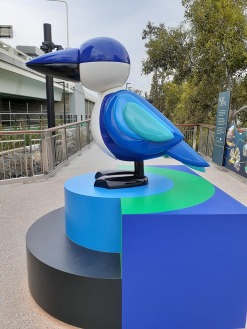 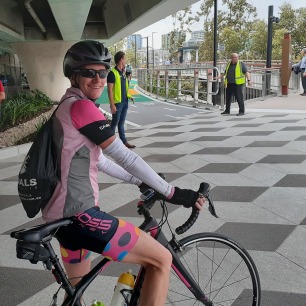 Unfortunately, while we were enjoying the opening of the great new section of separated path along the Bicentennial Bikeway, one of our supporters had a much less pleasant experience at Howard Smith Wharves. Fortunately Paul’s grazes will heal and his bent wheel can be fixed. But the potential for more serious injuries is just far too high in this cluttered and busy space. And things just keep getting worse: there are now bars serving alcohol on both sides of the narrow path where people stand around the bollards waiting for the lift. No-one who did the most basic safety audit would sign this off as acceptable.

The frustrating history of the development at Howard Smith Wharves was just one of the issues Donald from CBD BUG discussed with Trina Massey, who is the Green’s candidate for Central Ward, when they caught up for a quick ride on the weekend. (Side note: Trina’s bike was put together by the Useful Bike People who are a fabulous social enterprise trying to build a “bike kitchen”culture in Brisbane.)

Over at Eagle Farm: After disappearing for the weekend, Brenda Bones was back on Monday morning in position in front of the locked gate at the end of Viola Place, waiting for the bikeway that will connect from Brisbane Airport to Kingsford Smith Drive and the Gateway Bridge. We speculated that perhaps she had popped away on the weekend to help out the designers; explaining how it should be quite simple to build a few hundred metres of path over flat ground to connect with the bikeway stub at Schneider Rd. With $3 million set aside over four consecutive budgets, funding shouldn’t be a problem either. 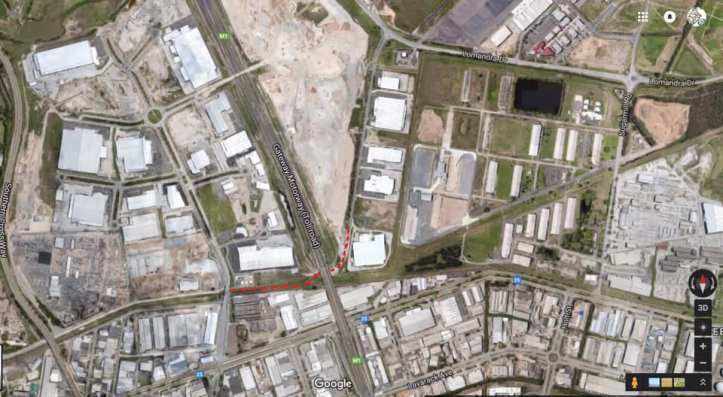 On Tuesday, Brenda took time out from her vigil for a fun night out on our Tuesday Slow Roll. She also caught up with a few fans at breakfast on Wednesday morning. But she had to get back to work at Brisbane Airport later that day, via the unpleasant connection along Sugarmill Drive. We understand that Lord Mayor Adrian Schrinner was also out at Brisbane Airport on Wednesday (although we don’t think he arrived by bike), discussing options to improve public transport for the 24,000 people like Brenda who work there each day. Hopefully he also spoke with Brisbane Airport about active transport, and will be fast-tracking the Viola Place bikeway connection across Council land. 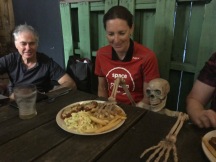 Greens Lord Mayoral candidate Kath Angus has promised Brenda that if Kath is elected to office next March, Brenda will have her bikeway.

While Brenda Bones has been stuck at the end of Viola Place waiting for the bikeway connection through to Kingsford Smith Drive, her cat Spooky slipped through the gate to go exploring. We snapped this photo of Spooky just a few hundred metres away, exiting though the second gate to reach the bikeway at Schneider Rd. We hope Brenda and Spooky can travel together again soon.

On the other side of town, in West End and Highgate Hill, it seems the community around Dornoch Terrace is split on how best to address safety issues on the street. At an earlier public forum, many people were keen for safety measures designed to make it easier for people to cross the street and use their driveways without risking conflict with high-speed traffic – including people on bikes who use Dornoch Tce as part of the popular River Loop. (For the record, we support calls to slow all vehicular traffic on this route in the interests of public safety, even though that’s not a popular call with some sporting cyclists). However other people don’t support any measures that would reduce the amount of kerbside space available for on-street car parking. Residents have also raised concerns about plans to remove bus stops, which would limit accessibility for elderly people.

South Brisbane MP, Jackie Trad arranged another community on Sunday, 3 November at St Francis Hall, 47 Dornoch Terrace. We were concerned that this may not have been well communicated to the people in West End for whom this is a vital commuting route. Riding up the steep hill sandwiched between parked cars and vehicles passing at high speed can be quite daunting. We encouraged anyone who regularly uses Dornoch Tce (or who would if there was better traffic management) to attend the meeting on Sunday, and to get in touch with your MP if you couldn’t make it at such short notice.  You can contact her office on 3724 9100 or South.Brisbane@parliament.qld.gov.au.

As Council and State Government point the finger of blame at each other for the lack of progress on the Brisbane Metro project almost four years after it was announced by then Lord Mayor Graham Quirk, we think there’s an obvious opportunity for them to both prove they are acting in good faith: implement a trial closure of the Victoria Bridge to general traffic, leaving it exclusively for people walking, cycling, and taking public transport. This was recommended by public transport lobby group RAIL – Back On Track back in 2016, and part of our petition to Council in May 2017. 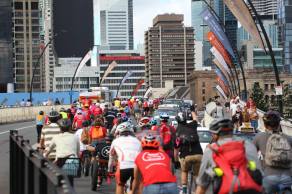 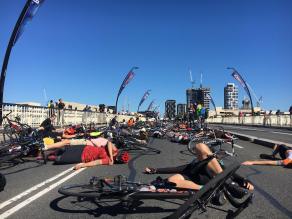 A 3 or 4 month trial, starting immediately would allow both parties to assess the impact on surrounding streets of closing the bridge to general traffic. Evidence from cities all around the world suggests that the closure would result in a reduction of traffic in the city – with those still needing to drive between South Brisbane and the CBD served by the William Jolly Bridge, but others discovering that public and active transport are more attractive options once cycling and walking via the most direct route is made more convenient and pleasant by removing the cars. Closing Victoria bridge to general traffic could be expected to have positive flow-on effects at the intersections along William St, and at Elizabeth and George Streets. If the short trial defies results from other cities, and does indeed result in the dire consequences a few people are warning about, then that should inform planning for the Metro going forward.

While it’s not in Brisbane, we couldn’t resist sharing this news piece from WIN News Toowoomba because it’s so refreshing to see a news story all about the benefits of building bikeways (in this case a new 15km path from Highfields to Toowoomba) – including reducing congestion, boosting local businesses, improving real-estate prices, and attracting tourists to the region. Well done Toowoomba Region BUG!

After seeing examples of roundabouts with protected bikelanes in South Melbourne earlier this year, we were not surprised to see more innovation in the Victorian capital. This time it’s City of Melbourne and the Victorian Government implementing a protected intersection in East Melbourne. We hope planners in Brisbane will take note, and start implementing solutions that will make cycling feel safe and attractive for the many people who would like to ride more but who don’t feel confident mixing with cars and trucks through busy intersections, where the risk of a crash is highest.

In the US, New York City leads the way in making street space safe for vulnerable road users. Delivery vehicles compete for kerb space with bike riders, but the city has decided that protected bike lanes are more important for safety and the efficient operation of traffic. This contrasts with Brisbane where council still promotes street widening projects as “congestion busting”. Let’s borrow this idea from the Big Apple right now and make Brisbane truly “world class”.