We were thrilled to have the opportunity to help open the Veloway Stage E on Tuesday. Belinda joined Bicycle Queensland and Cycling Queensland at the ribbon cutting with Transport Minister Minister Mark Bailey, Member for Mansfield Corrine McMillan, Member for Greenslopes Joe Kelly, and Member for South Brisbane Jackie Trad. 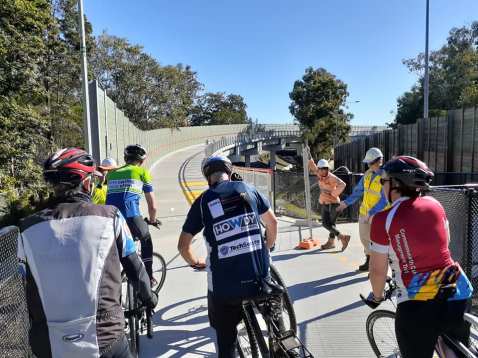 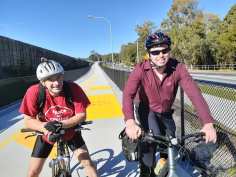 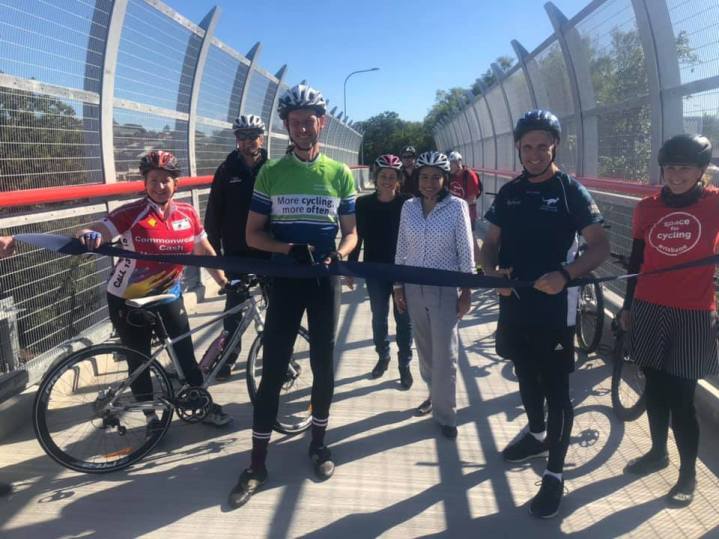 This new section of the Veloway passes above three very busy intersections at Gaza Road, Sterculia Avenue and Marshall Road, making cycling accessible to people of all ages and abilities.

After the gates opened on Tuesday, it didn’t take long for word to get out, and Tarragindi soon became a cycle-tourism hotspot. “It’s great. We’ll be back for sure!”

And while it’s not as glamorous as the Veloway-proper, we’re impressed with the quality of the new shared path along Birdwood Rd which connects the new Stage E to the older Veloway. This is a really practical solution, and the team did a great job delivering it in time to open everything together. (Just remember this section is a shared path. It is well used by pedestrians, and there are a number of driveway crossovers, so please slow down and take care.) 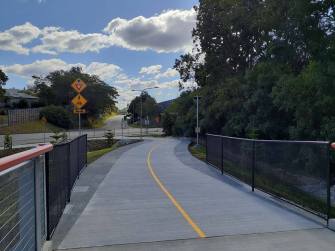 One thing this project demonstrates is the value of having decision-makers who ride: Back in February 2017, Joe Kelly MP joined Belinda from East BUG for a ride around his Greenslopes electorate. One of the places they stopped was the end of the Veloway at Birdwood Rd, where Belinda made the case that improvements were desperately needed to get though the dangerous section under the motorway and the Marshall Rd intersection. This week, Belinda joined Joe in opening the fabulous Stage E!

Back when they first met in 2015, Belinda and Joe discussed the importance of cycling infrastructure that is suitable for people of all ages and abilities – while Joe’s daughters were busy demonstrating that kids love to be active and independent. This week Brenna joined us for a ride from Greenslopes along the new path. 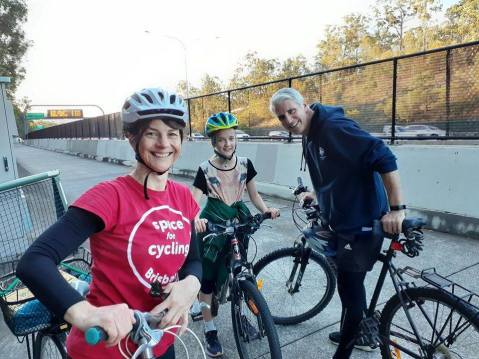 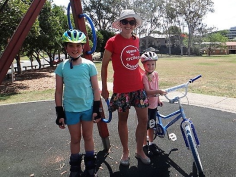 This path opens up transport and recreation opportunities for families who were excluded when they had to ride on the road or try to squeeze along the footpath. Let’s do more of this!!

What should be the next stage?

Now that Stage E is completed we asked out Facebook followers: what would you like to see as the next improvement along the Veloway?
A) VeloBridge over Lower River Terrace, South Brisbane
B) Improved connection to Gabba Bikeway at Stanley St
C) Overpass at O’Keefe St, Woolloongabba
D) Bridge over Birdwood Rd, Holland Park West
E) Fly-over of Klumpp Rd and motorway on-ramp at Upper Mount Gravatt
F) Worrell St, Macgregor (creating a separated path with improved connections)

Option C (an overpass at O’Keefe St) was the most popular choice, but there was plenty of support for other Veloway improvements too.

Inspired to start cycling to work, but don’t have access to good end of trip facilities? If your destination is in the CBD, check out Cycle2City, with ride-in access from Roma St (below Turbot St). They’re offering a 7-day free trial, and various casual-use discount packages. They offer secure bike storage, lockers, and showers, plus you can also access dry-cleaning and bicycle servicing. 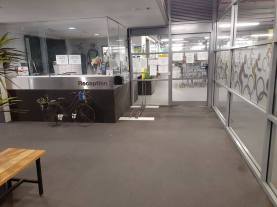 Saturday 27 June 2020, was the 10th anniversary of the opening of the Gateway Bridge Bikeway. The path opened up a lot of new cycling options, especially for the bayside suburbs, but there are still missing connections on either side. We arranged a couple of rides to mark the occasion:

From the south-side, a small group of riders joined Belinda from East BUG on her Dead Ends and Discontinuities Tour, celebrating the anniversary by riding around, under, and over the Gateway Bridge. We also went exploring at each end, visiting some of the dead-ends, and contemplating what could be…

From the north-side, Mitch from Airport BUG led the Brenda Bones and Friends Fun Ride to Viola Place from Albion, checking out the North Brisbane Bikeway and Kedron Brook Bikeway. We met up at Brisbane Airport to look at the grounded planes, and to make a pilgrimage to the gate at the end of Viola Place. Our latest blog post takes a look at the history of the proposal to connect between there and Schneider Rd. After appearing as a line item in Brisbane City Council’s last 6 budgets, but not the current one, we’re nevertheless hoping 2020-21 will be the year the connection is finally made!

We also took the opportunity to farewell the scaffolding bridge on the Jim Soorley Bikeway. From Monday 28 June, the path will be closed for 4 days while the temporary structure is removed. If you’re travelling that way next week, the official detour is along Nudgee Rd, or you can take the alternative recommended by Brisbane North BUG

Speaking of path closures, what has been your experience at the Grammar Path squeeze so far? It’s narrow, but with the pull-over bays only a short distance apart, it doesn’t seem too difficult to negotiate—provided people are patient and considerate (and so far, that’s everyone we’ve encountered). We think it’s infinitely better than Plan A which involved closing the path for 6 months. 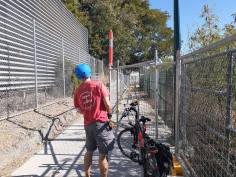 Council spent Wednesday debating their 2020-21 budget programs covering Public and Active Transport and Infrastructure. One question was clarified for us: the $30 million earmarked over the next 4 years for the Active Transport Infrastructure Fund includes not only new bikeways, but also repairs to existing paths. Previously, “bikeway reconstruction” was listed as a separate line-item for around $2million per year. 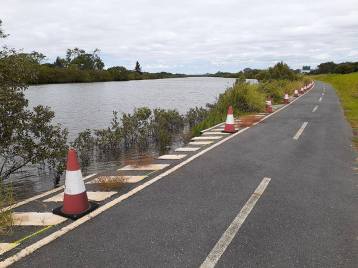 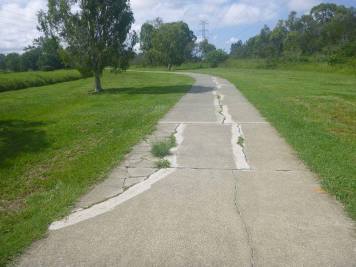 While we don’t necessarily think spending is the best measure of value delivered, we’re still concerned that the reduced funding envelope for bikeways is going to be spread quite thinly. We’re not keen to see trade-offs between long overdue new bikeways (like the Viola Place connection to Brisbane Airport, Weyers Road link to the new Gateway North Bikeway, North Brisbane Bikeway Stage 5, and Norman Creek Bikeway underpass at Stones Corner), and repairs to existing shared paths like the Bulimba Creek Bikeway through Tingalpa and Carindale, and the Jim Soorley Bikeway where it is crumbling into Schulz Canal. 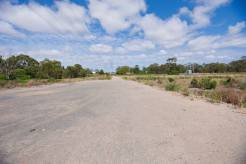 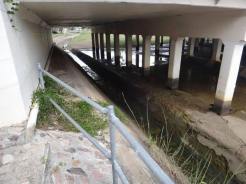 We also note that a number of those projects have been listed in previous budgets: $680,000 for erosion protection on the Jim Soorley Bikeway, $3million for the Viola Place connection, $1million for the North Brisbane Bikeway, and $390,000 at Weyers Rd. None of those project have started, so we’re wondering: has the money from last term been carried over, or was it spent elsewhere instead – and if so, where?

But as we can’t treat the bikeway network in isolation from Brisbane’s road network. Brisbane City Council recently completed a $40 million project to replace the roundabout at the intersection of Murphy Road and Ellison Road in Geebung “to improve traffic efficiency, reduce congestion and increase safety for all road users.” But how efficient does this look for anyone walking, or for someone not comfortable cycling on the road, even if there is a strip of green paint either side of the intersection? 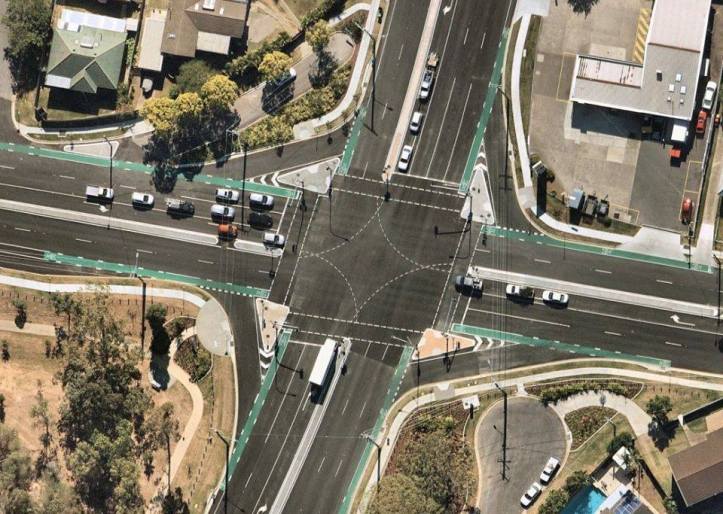 Compare that to this second image of an intersection on the new Walnut Ave bikeway in Fremont, California. Where would you be happier for your family to ride? Which do you think is a smarter investment in a “clean, green, and sustainable” city? 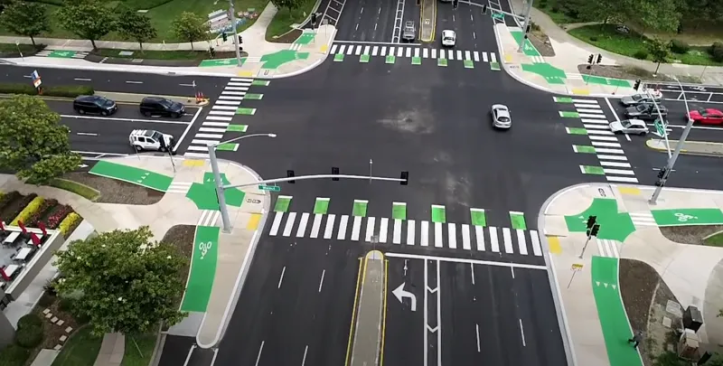 On the topic of Council’s budget, Belinda visited her local councillor, Councillor Kara Cook on Friday to talk about the budget, and some of the challenges for active transport in the Morningside Ward. They were both dismayed to see that no funding has been allocated for the major improvements needed to Lytton Rd through Balmoral and Morningside to make it safe as a primary cycle route – or indeed its role as a designated freight access route and the major connection for traffic into the Bulimba peninsula from the east, and north. Disturbingly, Lytton Rd is counted in Council’s “constructed” bikeway network because there are some remnants of bicycle stencils along it. Also, if you want a pile of horse poo, it’s available near Perrin Creek Bridge for $3 a bag. 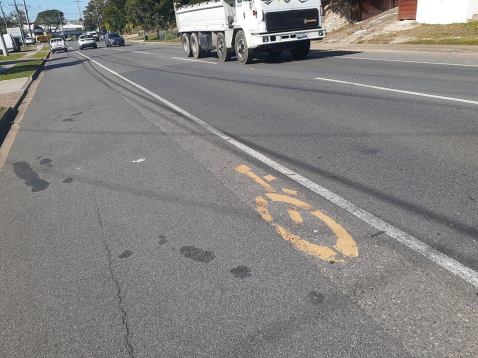 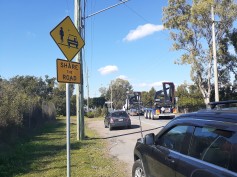 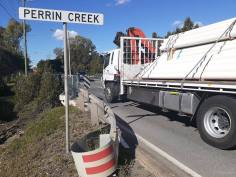 Speaking of trucks; earlier this week, Mitch from Airport BUG attended a stakeholder working group convened by Brisbane City Council to help scope their Safe Travel Together project. The project aims to deliver an education and awareness campaign to address challenges faced by heavy vehicle drivers and people who ride bicycles when sharing Brisbane’s roads.

Mitch pointed out that Safe System Principles (which have been adopted in Australia as part of the National Road Safety Strategy) say:

What sort of education and awareness do you think would be suitable to prepare your kids to ride to the park, pool, or local shops in an operating environment like this?

For some people, the word “cycling” immediately brings to mind images of sporty types in lycra. But good facilities make cycling a practical and enjoyable way to get around for all sorts of people. Thanks to Ellis for this great video of one of his favourite cycling routes around Liverpool.

Oh la la! In Paris, city authorities don’t want to go back to roads choked with cars, so they’re rolling out 650kms of “Corona Cycleways”. Bike sales and usage is surging across the world; the real New World Cities will be those which enable people to keep pedalling while cars take a back seat.

Finally, from Canada, here’s a great vision for helping to bring our suburban centres back to health. “We want to show a street that is alive. A street that prioritises people; a place to meet neighbours and friends. A street that isn’t just absent of death.”