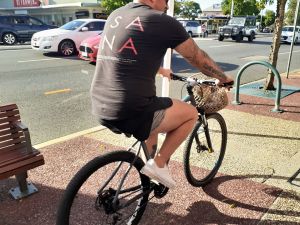 It has been great to see so many people getting out and about exploring their neighbourhood by bike. Even the mainstream media have noticed! Let’s make sure we keep this momentum going after the coronavirus movement restrictions are relaxed. Cycling has always been a healthy, cheap, convenient, and fun way to get around, but now the secret is well and truly out!

We have a simple message to all the new and rediscovered cyclists out there… You’re awesome!

All of Brisbane’s shared paths and cycleways have been very busy recently, but perhaps none more so than the Kedron Brook Bikeway. It’s great to have a wide separated facility so people can walk, run, and cycle safely away from motor traffic. These two passengers were certainly enjoying feeling the wind on their faces:

Getting physical exercise is important for staying healthy at any time, and cycling is one of the best ways to do that—for people of all ages and abilities. Pam’s husband has COPD, so keeping up exercise is vitally important is to help him combat muscle wasting which is one of the complications of the condition. Having access to the bikeway to go for a cycle together to Deagon is one of the things they love about where they live. 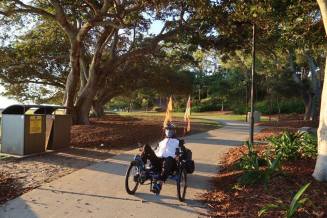 (Note that wearing a mask is sensible extra precaution if you’re in a high-risk group, or if you share space with others who are. So thumbs up from us to anyone getting out there and exercising safely!)

But what about if you don’t live right next to a bikeway? Woonerf is a Dutch word meaning “living street“—or more literally a “living yard“. It’s a shared space where traffic is calm and slow, and the street is safe to use for recreation. It is possible here in Brisbane! In this clip, Belinda takes us on a tour of some of her favourite local streets. If we can keep traffic speeds on neighbourhood streets low (below 30kph), discourage rat-running through traffic, and limit the number of trips people need to take by car in the first place, our streets can look and feel like this all the time!

So how do we get there? Advocacy! Here’s the latest news:

This is what advocacy looks like in the era of physical-distancing. This week, Belinda from EaST BUG joined a virtual open-office hosted by her local representatives Cr Kara Cook (Councillor for Morningside Ward), Di Farmer MP (State Member for Bulimba), and Terri Butler MP (Federal Member for Griffith).

We want to ensure that any stimulus spending on infrastructure goes towards projects that will set Brisbane up well for the future. The current situation has highlighted the importance of local parks and trails that people can access without having to get in their car and leave the neighbourhood to reach them. There are families out and about on bicycles everywhere! We predict this effect will last some time, as people rediscover the joy of riding a bike, and how convenient it can be to get places by bicycle. Let’s act now to ensure there are safe and convenient routes so active travel can become the new normal.

We’ve also been busy writing to our newly (re)elected councillors asking their help to fast-track building and improving the local bikeway links that will help keep people riding after the coronavirus lockdown, and will create jobs and help stimulate local businesses in the process. Cr Fiona Cunningham (Coorparoo Ward) is already a step ahead with this one: when she walked around Stones Corner with Belinda before the election she expressed suprise that the path from Gladys St just ran out, and didn’t connect through to the Norman Creek Bikeway. Well very soon it will! Thanks Cr Cunningham. 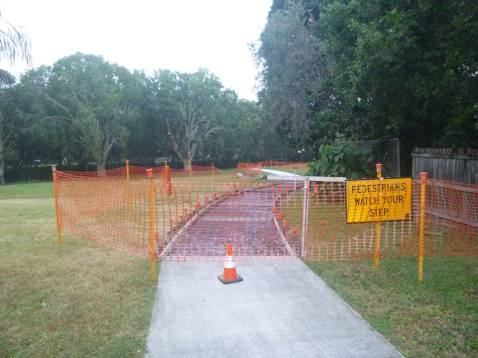 The New Zealand government has announced it will provide 90% of the cost to councils to roll out pop-up cycleways and footpath extensions to help cope with the coronavirus lockdown. Transport Minister Julie Anne Genter MP says: “People need more space to move around safely, whether on foot or by bike, and this will ensure safety from cars as well as safe physical distancing. Low cost and innovative changes like colourful paint and planter boxes can be used to make streetscape changes quickly.” Councils can identify projects and apply for funding from the NZ Transport Agency now!

Hello Australia….?? Brisbane City Council where is your list of priority projects? We can help with suggestions! (Please check your email inboxes!)

We did ask the Department of Transport and Main Roads if we could have a lane on the Captain Cook Bridge for active transport while half the Goodwill Bridge is blocked to enable work on the structure above. Impossible you say? Why?? The Margaret St off-ramp has been closed regularly for construction work on the new casino, and right now CBD traffic is light as many people are working from home. A direct connection from the Veloway to Margaret/George St would be perfect! #OutrideCOVID 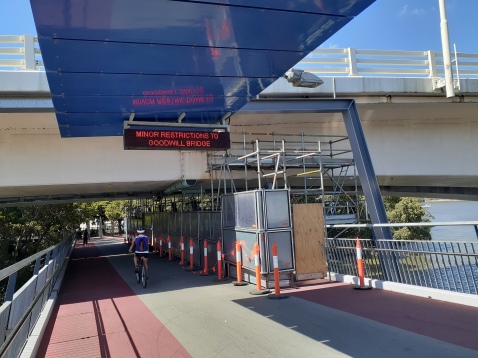 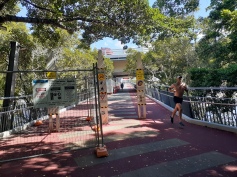 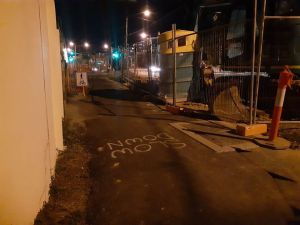 One improvement EaST BUG were happy to report, was that after complaining to Council last week, the temporary path along Wynnum Rd, Norman Park was improved significantly. There is now a clear path of 2m almost all the way – except at the very top (near 90 Wynnum Rd) where it narrows, and the site lines have been improved. Thanks to Council for following up on this. It’s still a bit bumpy and wonky, so please slow down and take care, but the path is now much safer than it was over the Easter weekend!  We’re still waiting to hear back from Council on the state of the “shared path” on Canning Bridge (where Wynnum Rd crosses Norman Creek) however. We’ve asked Council multiple times to resurface this section; it’s in dangerous condition, and should have been addressed while they have been spending $130 million widening and smoothing the road. If someone on a bike riding inbound encounters someone coming in the opposite direction and goes to move left to make room, there’s a real danger they could catch their wheel in one of the large holes and fall into traffic! 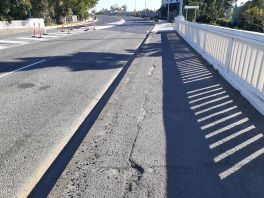 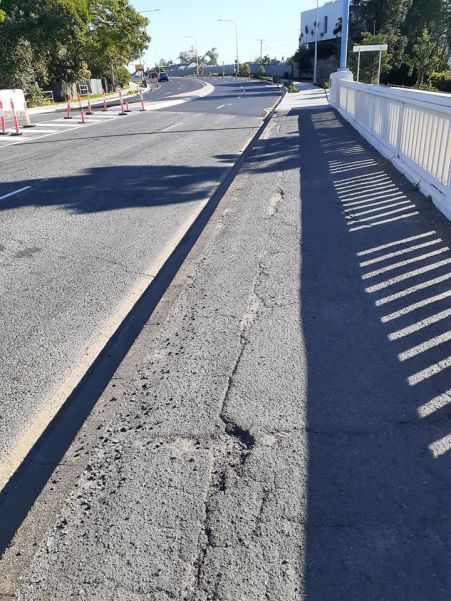 We’ve all had a giggle at pictures of people wearing plastic bags over their head, and wrapping their whole body out of fear of droplets containing live corona virus. Early this week we joked that perhaps that’s what the counters on the bikeways over the Land Bridge and on Stanley St were doing. 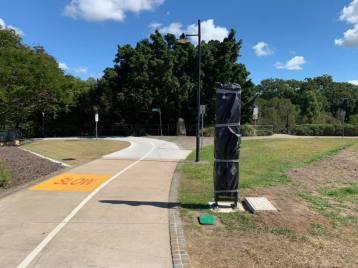 Maybe our teasing sparked a counter revolution. A few days later, a new one appeared on Annerley Rd, just south of the Stanley St intersection—but it’s still in its pyjamas. Meanwhile its older brother on Stanley St was busy, with 672 cyclists passing by 4:15pm on a drizzly Saturday.

We also noticed that the counter on the Land Bridge to Victoria Park had thrown off its plastic wrapping and was doing its thing. Further north at Wooloowin, the counter on Bridge St is unwrapped, but not yet counting. 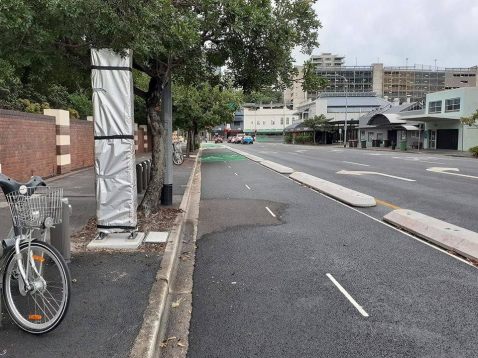 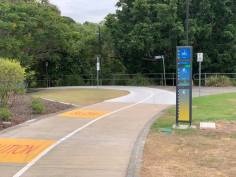 (In addition to these, there are counters with live displays on the Bicentennial Bikeway, the GoBetween Bridge, the Kingsford Smith Drive Bikeway, and (still wrapped up) Stanley St near the Goodwill Bridge.)

This week’s dose of bikeway anticipation is brought to you by the letters V, E, and the number 1. These photos of the V1 Veloway Stage E construction show the point opposite Peronne Rd, Holland Park West where the bikeway dips to ground level, allowing a local connection. Also, the access from the southern end, near Gaza Rd.

Quest Community Newspapers ran a positive story on the Veloway Stage E project, which is on-track to be finished by the middle of this year. Commuting by bike from the south-eastern suburbs looks set to be faster than the same trip by car or bus—not to mention cheaper and healthier. As Belinda says:

It’s a faster, more direct route that also gets cyclists off numerous smaller street-level intersections, but it will highlight the next problem along the route and that is the Birdwood Rd crossing.

We need to keep up the pressure on Brisbane City Council to improve the Birdwood Rd section in the immediate term, and to work with TMR to create a high quality long-term solution.

Thanks also to Chris from Brisbane West BUG for these latest pictures of how the connection from the new Ipswich Motorway Cycleway to Granard Rd is shaping up. It’s now evident that there will be a signalised crossing over the Ipswich Rd service road which can be used from riders transitioning from the new bikeway and continuing towards the city on Ipswich Rd. It’s a slow build because this bikeway is part of a massive road project, but so far the cycling infrastructure looks excellent. 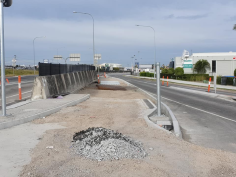 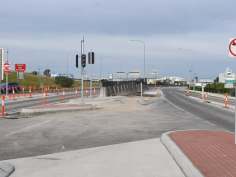 Finally, in a sad footnote, someone who didn’t outride COVID-19 was the legendary Tim Brook-Taylor. Rest in peace. This week there’s an empty seat on The Goodies’ trandem, and the world is missing a little magic 😦