This week, Council announced the preferred alignment of the five new green bridges they have proposed for Brisbane. We’re very pleased to see this increased emphasis and investment in walking, cycling, and improved public transport. We hope the planning for these new bridges will go hand in hand with plans for improving the network connecting them, so we get best value for the city.

First up is the Kangaroo Point Bridge – which has been discussed for decades; indeed in some form for over a century! It’s great to see it finally getting closer to reality. According to the business case (which we think is fairly conservative) the new pedestrian and cycle bridge will be used for more than 5,000 trips per day as soon as it is ready.

The preferred location, from the corner of Alice and Edwards Streets, to Scott St at Kangaroo Point makes a lot of sense. The obvious connecting links are Edward St (to get people into the CBD), and across the Kangaroo Point peninsula (via an underpass without stairs) to Deakin St and connecting through to Mowbray Park. We hope Council will do the sensible thing and develop these links at the same time so this will be a really transformative project.

We think the business case for the CBD to Kangaroo Point bridge writes itself. Ferries are nice, but who really wants to be beholden to a timetable (or get stuck after a night out) when your destination is only a few hundred metres walk. Active transport needs to be the easy option. 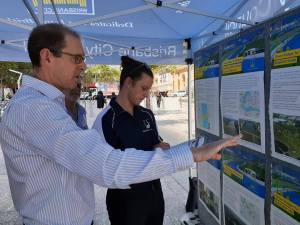 Council are out and about consulting on their bridge proposals. We caught up with the team in Reddacliff Place this week. These additional bridges have the potential to transform Brisbane, making it much easier to cycle and catch public transport between destinations. So we’re urging everyone to get along to the consultation sessions and voice your support for the proposal overall, as well as providing your thoughts on the proposed alignments. This week, there will be sessions on:

Another consultation you might be interested in if you live in the eastern suburbs is the Lindum Station Precinct Study. This is an important area for cycling, as there is a dangerous angled level crossing right at the intersection of what are supposed to be 5 principal cycle routes (although 2 of those don’t exist yet at all and one is almost completely unrideable). We’re really keen to see improved local walking and cycling access to Lindum Station from all directions, and good through routes for cycling, including a link across to the industrial area west of Lytton Rd, and to the residential areas and facilities in Wynnum West and Wynnum North.

So, the outcome: There will be some small improvements to the footpaths along Dornoch Tce, and some additional pedestrian refuge islands. (We’re concerned that’s likely to make dangerous conditions marginally worse for cyclists). The priority going forward will be on retaining kerbside space for carparking. Unfortunately, we fear that priority is likely to carry through to future proposals, so potentially delivers a big blow to ever getting safe cycling conditions on nearby Vulture St, or on Stanley St East.

It was also claimed that it is “cyclists” who will be upset about the result, as they were the ones who wanted the bike lanes. Which as we know is untrue for most recreational and sporting cyclists riding the River Loop. It is the residents of West End and Highgate Hill trying to use Dornoch Tce for local trips instead of taking the car who lose. And all of us when the message becomes further entrenched that the priority use for street space is not for moving people, but for parking cars.

Our video of the omnishambles at Howard Smith Wharves went a little viral this week. Can you believe they won an Australian Urban Design Award for this??

On a lighter note

This video’s just for fun: How to get to work (and beat congestion) like a good boi…

Don’t forget to set your camera rolling to collect 5 minutes of footage for an entry in the Brisbane Bike Bites short film competition. We’ll be showing the finalists on the big screen at the Schonell Cinema in March 2020.

We believe in the importance of local conversations. In fact we’ve been so busy we’re only belatedly reporting back on some of these.

Last the weekend, Belinda caught up with her state government representative Di Farmer MP, and took the opportunity to talk about challenges for multi-modal transport in the Bulimba electorate; combining cycling with access to trains and ferries. We had a good discussion about the need to improve access to Morningside Station—which is cut off from half the suburb by the challenge of trying to cross Wynnum Rd as a pedestrian or cyclist, and still doesn’t even have a bike rack on that side of the overpass. Belinda pointed out that the $3.4million to build 80 additional carparking spaces at Cannon Hill station is probably not as cost-effective as a path so that people can walk and cycle to the station from Morningside Junction and Bill Cash Memorial Park—something we’ve been asking of Council for years.

We also discussed bikes on ferries: often half the passengers on the Bulimba Ferry on the weekend are travelling with a bicycle, but it’s incredibly awkward to get a bike onboard, and effectively impossible with a cargo bike, trailer, recumbent, or a heavy ebike, for an older person, etc.

Belinda also caught up with her local councillor, Cr Kara Cook for Morningside Ward. On the agenda: how can we get the council administration to take action on Lytton Rd Morningside/Balmoral which is falling apart? It’s failing active transport users, residents, and the local industries. The entrance to Colmslie Recreation Reserve has also been top of the list of requests for local infrastructure for years, but so far council has only enlarged the carpark; too bad if you might want to walk or cycle to the pool, hockey centre or other community facilities. We also discussed the possibility of making the roundabout at the intersection of Pashen St and Thynne Rd into a trial site for a protected roundabout design like those we saw retrofitted at reasonably low cost in South Melbourne earlier this year.

The Morningside State School community does a great job of active travel, but Pashen St still gets pretty hectic at the start and end of the school day. Belinda couldn’t resist chasing down this local family who have no problem pulling up right at the school gate though. It’s fabulous to see cargo bikes taking off as family transport in the suburbs of Brisbane.

We can’t wait to check out the documentary Motherload at the Brisbane Bicycle Film Festival in March 2020. Cargo bikes can change the world!

Finally, across at Viola Place, Airport BUG have hung their Christmas stocking out, hoping Santa will bring them a set of bolt-cutters to remove the troublesome gate, and give them safe passage through to Kingsford Smith Drive.