Upgrades to the on-road bike lanes on Annerley Rd as part of the Woolloongabba Bikeway project last year were very welcome, but some aspects of the morning commute inbound from the Schonell Bridge still, well….. suck. 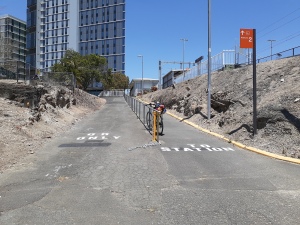 In a blog post this week, we asked: when is a transit-oriented development not transit-oriented? A design principle about “encouraging the use of public transport, walking and bicycles, rather than cars, for personal transport” sounds great, especially if the “development creates an integrated and continuous pedestrian and cyclist network that facilitates logical and direct access to public footpaths, public transport facilities and public open spaces.” But what if it makes it worse?? Who is ultimately responsible? We take a look, at the supposed transit oriented development at Buranda.

Further south, is it any wonder that there is so much pressure on the Park and Ride facility at Eight Mile Plains bus station when there is no way to access this major public transport hub by walking and cycling from nearby areas like the rapidly growing estates of Rochedale. Anyone from that area who might want to walk or ride a bike to the station, or jump on to the Veloway towards Garden City or the CBD either has to ride on busy Miles Platting Rd, or walk or cycle on the unformed grass verge – not to mention crossing the motorway on-ramp.

Would you let your children ride to school this way?? It’s the route to Rochedale State High School for many of the students in the catchment area!

We’re looking forward to catching up with the Council candidates for Macgregor Ward, Councillor Steven Huang (LNP) and Labor’s Trent McTiernan about their priorities; how can we manage growth in suburbs like Rochedale, Eight Mile Plains and Upper Mt Gravatt in a way that is healthy and sustainable?

The figures here are from the US, but in Australia the situation is similar: transport is set to overtake power generation as the largest contributor to greenhouse gas emissions. But it has been the focus of far less attention.

Individual choices are important, and it’s easy to point to the automobile and oil industries as the bogey-men, but elected officials are ultimately responsible for enabling an auto-centric road network that prioritizes cars over walking or biking, and continues to fund new highway construction at the expense of transit.

In 2020 we have Council elections in March and a State Government election in October. The people we elect will have a huge influence on the future of our transport emissions.

Every time we mention transport emissions, someone insists that electric cars will be the answer. But there are many reasons electric cars are not a panacea for the problems posed by cars in cities, and brake dust is one of them. (Although a couple of our astute Facebook readers  pointed out that regenerative braking used by electric engines does indeed reduce the amount of brake dust, so this article (which is about air pollution from cars in general) is perhaps not the best example to illustrate the point that although electric cars have advantages over petrol/diesel/LPG they don’t solve all the problems of cars in cities. We still recommend the article as worth reading.)

If you care about the climate, your health, and that of your children⁠—or even if you only care about the economic burdens on our future health system⁠—it’s time to get serious about reducing the prevalence of cars in urban areas.

One billion dollars! That’s how much Singapore‘s Senior Minister of State for Transport is seeking in extra funding to speed up plans to expand the city’s cycling network from 440km to 1,300km. Interestingly this seems to have been prompted by concerns of e-scooter users about connectivity in Singapore. Since scooters have been banned from the footpaths, it has highlighted more starkly that the cycling network just doesn’t connect people everywhere they need to go. Serious investment is likely to see a serious return, with better and safer mobility for everyone. 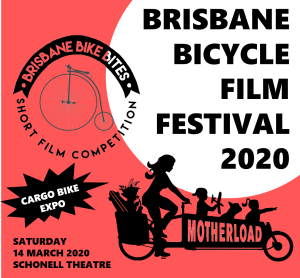 You now have less than a month to get your film finished and entered in the Brisbane Bike Bites Short Film Festival; entries close on 7 February. We are looking forward to seeing your films!

Also, don’t forget to get your tickets for the Brisbane Bicycle Film Festival where the finalists in the competition will be shown. Saturday 14th March 2020, 6:15pm in the Eleanor Schonell Theatre.

With Council now officially in care-taker mode ahead of the March 28 election, we had a busy week on the campaign trail. We caught up with all three registered candidates for Lord Mayor, plus councillors and candidates for the wards of Tennyson, Walter Taylor, Paddington, Pullenvale, Moorooka, Morningside, McDowall and Doboy.

Tuesday saw the last meeting of Brisbane City Council for the current 4-year term, but the messages from the current administration weren’t particularly inspiring. Wet weather caused potholes and cracks on roads and paths around the city, but some of the problems go deeper than a week of rainy weather. We attended information sessions on the North Brisbane Bikeway Stage 4, and discussed some of those things people say you can’t do by bike which you really can.

Many of Brisbane’s bikepaths have been under water this week, but it hasn’t slowed us down. This week we met with candidates for Enoggera and Moorooka; attended Council meetings to hear about Victoria Park and some petition outcomes; and proposed an improved connection between the V1 Veloway and Gabba Bikeway.

It was another busy week ensuring space for cycling is a hot topic for the March council elections. We caught up with candidates for Brisbane Central, Bracken Ridge, Paddington and The Gabba, representing Labor, LNP and the Greens. South Brisbane MP Jackie Trad MP made a surprising announcement about the Veloway while we campaigned for safety improvements further south, and Brisbane City Council dug in at Howard Smith Wharves.

This week we met with council candidates for Walter Taylor, Holland Park, and Macgregor – representing The Greens, Labor, the LNP, and an Independent. We spoke with TMR about the future of the Veloway at Worrell St, and tested Queensland Rail’s new app for booking and accessing secure bike parking cages.