In this post we attempt to throw some light on the confusion about the North Brisbane Bikeway, and take a closer look at some of the claims made by Brisbane City Council (BCC) and Transport and Main Roads (TMR) about what’s delaying the start of construction of Stages 2 and 3 (which are supposed to extend the existing bikeway from Somerset St through to Wooloowin Station at Rigby St) and stage 4 (from there to Price St). 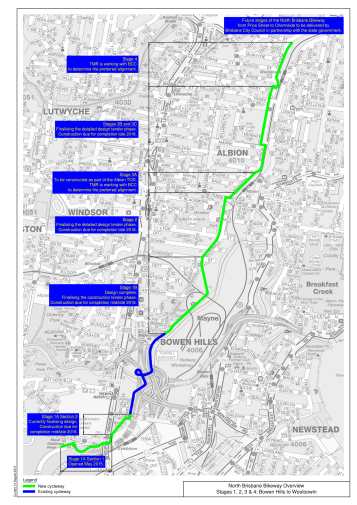 (For more detail, open the pdf documents: North Brisbane Bikeway Overview Stages 1,2,3 and 4, Bowen Hills to Wooloowin, current as at: August 2015 and March 2018)

For clarity, these are the various sections of the North Brisbane Bikeway for which TMR are responsible:

The next piece would be Council’s “North Brisbane Bikeway: Price Street to Kedron Brook − Kedron Brook – Wooloowin” project, which was to be delivered by Council commencing this year, and funded 50% by them and 50% by TMR.

Earlier this month, Deputy Mayor Adrian Schrinner announced that Council was putting this section on hold due to complaints from residents about parking, and confusion about progress on the connections further south (stages 2, 3 and 4). He also wrote to Transport and Main Roads Minister, Mark Bailey MP asking that TMR halt progress on stages 2 and 3 until they had undertaken further community consultation.

Stages 2 and 3 – Questions of design and consultation 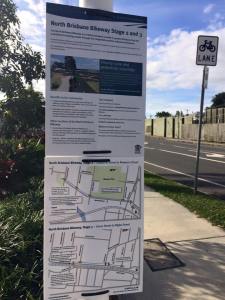 TMR conducted a community consultation on the preliminary design for Stages 2 and 3 back in June 2015. Technical experts from TMR conducted a cycle tour of the proposed route to delegates at the Asia Pacific Cycle Congress (including representatives from Brisbane City Council) which was held in Brisbane in September 2015.

We also note that detailed drawings of the proposed works were available to developers of sites along the corridor – for example A004465701 for
22 Morris St, Wooloowin submitted in August/September 2016.

As far as we can see, the only significant difference between the latest design and that which TMR put out for consultation in June 2015 is that where the bikeway crosses Blackmore St (and possibly McDonald Rd) there will no longer be a priority crossing of the type recommended by Austroads. We understand that’s due to insistence by Brisbane City Council who seem very reluctant to provide priority crossings.

Looking at the budget, we note that the State Government funding for the North Brisbane Cycleway is included in the Queensland Transport and Roads Investment Program 2017-18 to 2020-21 (QTRIP). QTRIP details the current transport and road projects that the Queensland Government plans to deliver over the next 4 years.

Indicative amounts to complete the project in 2019-20 are included but not yet approved.

This all leaves us a little confused about Cr Schrinner’s statements that it is TMR and who are responsible for delays to stage 2 and 3; that they have not consulted with the community; and that the project is not funded. However we are encouraged by his enthusiasm for Stage 4 of the project, since cycling conditions along that section of Dickson St are sufficiently uncomfortable for regulars to refer to it as the “Death Corridor”.

We hope for a speedy resolution to the impasse, and that construction work will begin on this important project very soon. Hopefully Brisbane City Council can also employ their considerable marketing and public relations teams to educate nearby residents about the value of protected bikeways, and convert skeptics to supporters.

CityLink Cycleway is in the news; it’s great to see people discovering it! Go-slow on the Go Between Bridge and Cultural Centre Riverwalk; updates on Cross River Rail construction at Boggo Road; and our submission to a review of the local laws regulating advertising devices. Don’t let this be an epitaph for Brisbane: “Our city could’ve chosen life, but they chose cars.”

This week: the Victoria Bridge separated cycleway is open! But we’re still waiting at Sumners Rd and the Go Between Bridge. We have updates from Brisbane Airport, the Indooroopilly Riverwalk, and Ipswich Motorway Cycleway. We discuss cycling and the climate crisis, and imagine a fairer Fairfield Road.

Brisbane dried out in time for some fun bike events: Ride With Brisbane and Style Over Speed. Victoria Bridge and William St bikeways look oh so close, but still not open. Likewise the Ipswich Motorway underpass at Oxley Creek. We discuss the Roma Street Proposed Development Scheme, continue the conversation about 30kph streets, and ask: Is driving the new smoking?

Be careful in the wet weather; some people find driving in these conditions confusing, but the kids can still Ride2School. This week: good progress on CityLink, V1 Veloway, and Logan Rd, but not so much on the GoBetween Bridge. We talk about e-mobility and whatever happened to a couple of “shovel-ready” projects. Around the suburbs: Eatons Hill, Wakerley, Lota, and Arana Hills.

This week: how the North Brisbane Bikeway will connect through Eagle Junction, plus an update on the section between Chermside and Aspley. Improved plans for the Boggo Road precinct at Dutton Park; but a poor report card for TMR planners at Kenmore. CityCycle decommissioning is leaving riders stranded. Connections to the Ipswich Motorway Cycleway are coming – slowly.