Council has followed the recommendation in Bicycle Queensland’s original proposal to provide a 2-way separated bikeway along the northern side of Stanley St between Annerley Rd and Vulture St. I’m certainly looking forward to not having to deal with vehicles turning left through me to enter the hospital driveway on my inbound journey, not to mention people who can’t manage to fully park or unload in the loading zones and short-term parks in front of the hospital, thus pushing me out into the main stream of traffic – which often includes large trucks, and idiots racing to overtake in the left lane.

Generally, one-way protected bikelanes on each side of a 2-way street are preferable to a 2-way cycletrack on one side like is proposed here, but in this location I agree that the 2-way design is a sensible choice because it will achieve more within the constraints of the space available. Obviously it will only require the width of one separator (not two), but additionally a 2-way 3.0m wide path will still allow opportunities for cyclists to safely overtake each other wheres a single 1.5m lane between the kerb and a barrier wouldn’t.

Ideally, a 2-way bikeway in such a busy location would be wider than 3.0m, and I note that Stanley St already sees 1,200 cycle trips each day, and expect that number to increase dramatically once the cycleway is complete. Although Council is deviating from their normal practice by reducing the general traffic lanes from 3.5m to 3.3m (left lane) and 3.1m (centre lanes), I note that’s still wider than the 3.0m which has been shown to encourage the safest driving behaviour. I’d like to see the width of the bikeway in this section (which caters for both east-bound and south-bound traffic) increased a little to cater for future demand – but not at the expense of the footpath which is very busy in front of the bus station and Brisbane’s major children’s hospital.

I am pleased to see that the driveway entrances will be marked up to clearly indicate that drivers must give way to people travelling on the bikeway.

I imagine that cyclists riding in bunches in the early mornings and on weekends will often sensibly decide to simply take the left of three general traffic lanes for the inbound trip, rather than cross the road and squash into the protected bikeway. That will almost certainly trigger some people to get outraged at the sight of people on bikes not using the cycleway provided, but instead “hogging” a road lane and somehow hindering drivers who are incapable of switching to one of the other two free lanes. Realistically, some people are just willfully ignorant and that’s unlikely to change, so I suggest: smile, wave and enjoy the ride.

Let’s face it, it would be hard to deliberately design an intersection less functional for people travelling by bike than what’s there now, so almost anything would make this intersection better. As I’ve written elsewhere, I was concerned about the light sequence and space at the Vulture St and Dock St crossing which is already insufficient for the numbers of people trying to cross, let alone once inbound bicycle traffic is added to that side. However I have been reassured by the project team that this area will be addressed in the Kangaroo Point Bikeway project, which is intended to be delivered in conjunction with the protected bikeway at this end of Stanley St. I look forward to seeing the plans for the Kangaroo Point Bikeway within the next few months. 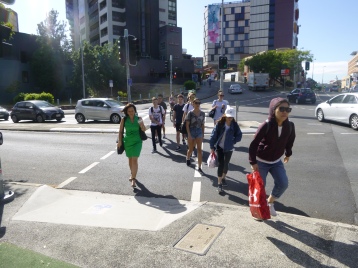 Help us petition for cycling infrastructure in all major projects – with no exceptions! This week: the Grammar Path diversion pops up; cyclists are ordered to dismount on Albert St and soon also on the Go Between Bridge. We’re still in the dark about the Bulimba Creek Bikeway lighting promise. Plus, our lockdown listening recommendations.

For the New Year, we check out 10 things we’re looking forward to in 2021, and one we’re definitely not. At this time for resolutions, we reflect on a few simple steps taken by other cities that could help make Brisbane’s streets much safer and friendlier. Together, we can do this!

Christmas greetings! This week Council released plans for the cycleway on Victoria Bridge and William St to connect to the CityLink Cycleway on Elizabeth St. We take a look at the wider, smoother SE Freeway Path at Annerley, and the North Brisbane Bikeway which is oh so close to being ready to ride. The upgraded path on Main St, Kangaroo Point is a bit of a disappointment though, especially when compared to what other cities have achieved this year.

This week: Consultation on the green bridges to West End has been extended, and we attempt to address some of the misconceptions about landing heights. Meanwhile, public engagement on the North West Transport Corridor enters stage 2, but some are left asking: is poor engagement worse than none at all? A petition asks Council to make Lytton Rd safe for all road users, and we look at the changing face of bike advocacy.

This week: More on green bridges – including our preferred option from Toowong to West End. Updates on the North Brisbane Bikeway, SE Freeway Bikeway, Indooroopilly Riverwalk, and Manly Rd at Tingalpa. We call for action on the real dangers on our roads, and discuss how changes to Cross River Rail construction at Dutton Park will impact Annerley Rd. There might be good news ahead for Moggill Rd, at last.