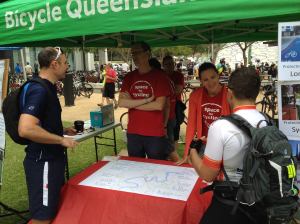 We had a great morning at the 2016 National Ride2Work Day breakfast, talking to people from all over Brisbane about their journey to work by bicycle. Our commuter route reviews (bit.ly/5k2BNE) generated a lot of discussion and ideas for improvements in Brisbane’s bicycle infrastructure, and many people signed letters to their local Councillors asking them to support our proposal for a grid of protected bike lanes in the CBD.

Thanks to Bicycle Queensland for hosting the event, and to The Coffee Club Supreme Courts for the coffee. It was good to see Councillor Ian McKenzie (Coorparoo Ward) arrive by bicycle and support Ride2Work Day. 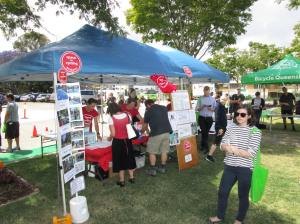 Our second stop for the day was the QUT Ride2Work and Cycling Expo at QUT Kelvin Grove. Once again we had great conversations with keen riders and people who would like to ride more but don’t feel comfortable on the routes they would have to take. One recurring theme was the difficulty of commuting by bike between the QUT campuses at Kelvin Grove and Gardens Point, and how a protected bike lane all the way along George Street would transform that trip. Many people were also keen to see CityCycle stations at Kelvin Grove.

Thanks to QUT Wellness Matters for hosting us, and to Electric Bikes Brisbane for letting us try out their fabulous electric-assist bikes.

Observing Council this week didn’t bring much joy for people keen to see improvements to the riverwalk at Kangaroo Point, including an extension to Mowbray Park. Around the suburbs we checked out the temporary bridge on the Jim Soorley Bikeway, and visited Dutton Park, Holland Park West, and Corinda. Wednesday was #WorldBicycleDay and even Channel 7 and the Courier Mail ran positive stories about cycling.