The paving surface through Howard Smith Wharves has not worn well since it was opened just prior to Christmas 2018. Adding more gravel on top — as occurred on late last week — has not helped the situation. We think it’s fair to say that the current state of the pathway surface doesn’t satisfy the undertaking made in the development application that it be “skid resistant, durable, stable, firm, relatively smooth, and safe for all users”.

Looking at the details of the documentation provided as part of the development application process, (and in particular for applications A004897423 Traffic Functional Layout for Minor Roads and A004897686 Signs and Line Markings for Minor Roads), it is revealing to read the letter from Brisbane City Council to the developer’s representative (Howard Smith Wharves Nominees) dated 15 October 2018. This letter indicates that compromises had already been made allowing the developer to provide a shared path through the site, rather than separated space for cyclists and pedestrians as advocated by Brisbane CBD BUG, and recognised as preferable for safety – for example by AustRoads.

In their letter of 15 October 2018, Brisbane City Council insisted that the path at least have a centre line to improve safety by indicating the importance of the through movement for pedestrians and cyclists. We are disappointed that the advice of Council’s own experts from their Public and Active Transport team and Transport technical specialists was apparently overturned in making a last-minute decision to approve the plan (on 14 November 2018) without the centre line. 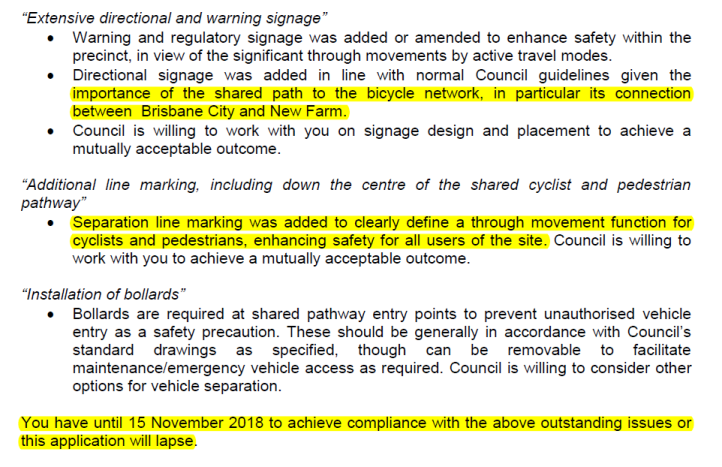 We believe the safety of all path users and site visitors has been compromised by allowing this major development to proceed without separating the 6m linear pathway into a cycleway and a pedestrian-only path, and without even providing a centre line to remind people to keep left.

Obviously there is always an onus on individuals to act responsibly and with care for the safety of others, but Council and the developer should be held accountable for conflict which has been made inevitable by a design which does not follow recommended practice.

With Council now officially in care-taker mode ahead of the March 28 election, we had a busy week on the campaign trail. We caught up with all three registered candidates for Lord Mayor, plus councillors and candidates for the wards of Tennyson, Walter Taylor, Paddington, Pullenvale, Moorooka, Morningside, McDowall and Doboy.

Tuesday saw the last meeting of Brisbane City Council for the current 4-year term, but the messages from the current administration weren’t particularly inspiring. Wet weather caused potholes and cracks on roads and paths around the city, but some of the problems go deeper than a week of rainy weather. We attended information sessions on the North Brisbane Bikeway Stage 4, and discussed some of those things people say you can’t do by bike which you really can.

Many of Brisbane’s bikepaths have been under water this week, but it hasn’t slowed us down. This week we met with candidates for Enoggera and Moorooka; attended Council meetings to hear about Victoria Park and some petition outcomes; and proposed an improved connection between the V1 Veloway and Gabba Bikeway.

It was another busy week ensuring space for cycling is a hot topic for the March council elections. We caught up with candidates for Brisbane Central, Bracken Ridge, Paddington and The Gabba, representing Labor, LNP and the Greens. South Brisbane MP Jackie Trad MP made a surprising announcement about the Veloway while we campaigned for safety improvements further south, and Brisbane City Council dug in at Howard Smith Wharves.

This week we met with council candidates for Walter Taylor, Holland Park, and Macgregor – representing The Greens, Labor, the LNP, and an Independent. We spoke with TMR about the future of the Veloway at Worrell St, and tested Queensland Rail’s new app for booking and accessing secure bike parking cages.